Allen had his guard up 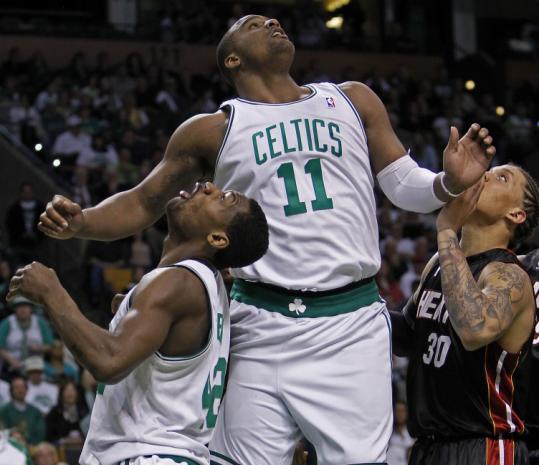 All eyes are on a reverse layup by Tony Allen (left), which dropped through the hoop, beating the first-quarter buzzer. (Jim Davis/ Globe Staff)
By Frank Dell’Apa Globe Staff / April 18, 2010

Most of the NBA went to warm climes during the All-Star break in February. Tony Allen, though, went north. No West Indies sand and waves for Allen, not when he could be working out in Waltham.

Allen had plenty of rehabilitating to do after right ankle surgery had limited him the previous season. And that daily routine appears to finally be producing results, as Allen scored 14 points and defended Dwyane Wade in the Celtics’ 85-76 victory last night in Game 1 of the first-round series.

“They kept me in that gym and told me I was going to be able to get back at times when I didn’t think I was,’’ Allen said of the Celtics’ assistant coaches and trainers. “Hard work paid off.

“I didn’t have anything to do [during the All-Star break], nowhere to go, and I didn’t want to spend any money because they said there was a lockout coming up. I’ve been waiting a long time. I just believe in God, everything happens for a reason.’’

If Allen continues with such performances, his financial concerns could lessen considerably.

Meanwhile, though, Allen is focused on the only team he has played for since joining the NBA.

“I’ve got to credit my teammates, the bigs,’’ Allen said when asked about defending Wade. “Our whole thing was covering that pick and roll. Last game he demolished us on that pick and roll, so I’ve got to take my hat off to Kevin [Garnett] and Glen Davis, Kendrick Perkins, and Rasheed Wallace. They helped me to contain him.’’

Allen played 29 minutes 21 seconds, but he likely would not have entered the game so early if not for a nosebleed that caused Ray Allen to run to the locker room. Tony Allen did not need long to warm up, as he went 4 for 5 and led the Celtics with 8 points in the opening quarter. But the game was decided during a second-half Celtics rally, during which Allen played an important role.

Allen’s low-post move against Wade provided the Celtics with a 76-69 lead with 6:13 remaining in the game. And his defending helped limit Wade to 1 point in a span of 17:37 over the final two quarters. After Wade’s drive gave Miami a 61-47 lead with 7:03 left in the third quarter, he did not convert another field goal until 1:26 remained in the game.

“They run a lot of sets that put him in the pick and roll, and if you don’t have your antennae up while he’s got the ball he can do a lot of stuff,’’ Allen said of the Heat star.

“He went 11 for 18 from the field, he had a great game. We just try to lock in on him and let the other guys beat us. He can drive, shoot, rebound, cut, steal, he can do everything. The whole thing is to go out and compete with him, and that’s how I looked at it.’’

The gauge for Allen’s recovery has been his condition the day following an extended game performance.

“They had a big rebounding advantage on us at half. We locked in during the meeting at half and said we’re going to try to focus on the pick and roll and when they shoot them long threes and they miss we need to get out to those rebounds. I feel all right, I’ll see how I feel [today], playing all those minutes. I ain’t really worried about what people are saying, it’s the playoffs, we’re the Celtics . . . and all we’ve got to do is grind from here on out.’’

Allen was involved in many key plays but could not get close to the scuffle that resulted in Garnett’s ejection with 40 seconds to play.

“I was so fatigued from chasing Wade all around I couldn’t even get over there and get to it,’’ Allen said.

“I think we’ve just got to keep our composure when it’s like that. It was very intense, I can say that. For the most part we’ve still got to keep our heads. Kevin Garnett is a valuable piece on the floor and we don’t need him getting two technical fouls.’’