THIS STORY HAS BEEN FORMATTED FOR EASY PRINTING
Celtics 99, Wizards 88

Celtics win with fireworks in 4th 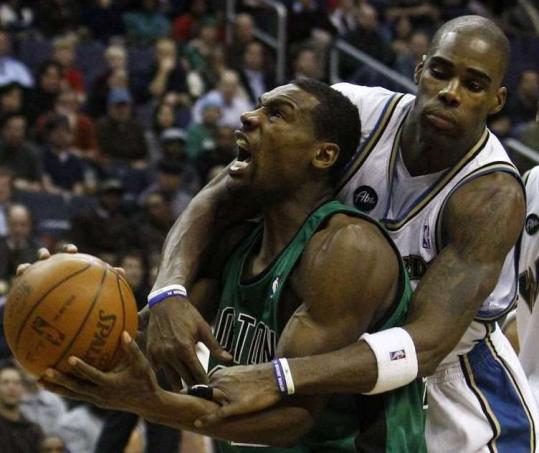 WASHINGTON - In a way, it wasn’t just a taunt, it was an insult to a team that made locking down scorers its business.

Caron Butler, one of the last pillars of the disaster area that is the Washington Wizards, was pinned in the corner by Brian Scalabrine near the Celtics’ bench.

Butler tried a crossover, but he lost the dribble.

He picked the ball back up and heaved a three with Scalabrine extending his arm in a futile attempt to block it. After it splashed through the net, the look on his face said, “He can’t guard me’’ and the gesture with his hand - slashing motion across his Adam’s apple - signaled the game was over, even though it was only the third quarter.

With 18 points and eight boards up to that point, Butler was a problem. For the Celtics, the answer was Tony Allen.

Coach Doc Rivers made the call to sic

The Celtics’ 99-88, come-from-behind victory over the Wizards was fueled by a late-game defensive stand that had become rare in recent weeks, and Allen was the poster boy.

“I took it as a challenge,’’ said Allen, who finished with 10 points and six rebounds off the bench, scoring 6 in the final quarter. “It’s like a test. Each game is like a test, like Doc Rivers is putting me in a quiz or something, and I try to go out and pass that test. That’s how I look at it. Caron Butler got going, my job was to go out there and not to stop him, but to contain him.’’

He was a 6-foot-4-inch blanket, a huge piece of the defensive fabric that had been shredded lately. Rivers pushed all his chips in on the defensive side.

“I told our guys with five minutes left, I said, ‘OK, if we don’t score again, we’ve got to win the game. Let’s just lean on our defense,’ ’’ he said.

“It was big today,’’ Allen said. “I heard a lot of talking, guys covering for each other if somebody got beat off the dribble, I think that’s what we’re going to have to do.’’

It was only the fifth time this season the Celtics were able to win despite being down going into the fourth quarter, having lost six of their last eight.

“[Last night’s] game was much needed, do-or-die if you want,’’ said Kevin Garnett after putting up a game-high 19 points, drilling a 16-footer with 1:23 left that essentially tucked in the Wizards.

Getting critical stops had been an issue for the Celtics during their three-game skid. While some panicked, Rivers looked at it differently.

“Four of these games, three of them came down to a couple of possessions,’’ Rivers said. “You have a couple of [good] possessions, we’re probably 3-1 in these last four. Instead, we’re 1-3 and the sky’s falling. And it really isn’t.’’

The defense ignited the offense, with the Celtics outscoring the Wizards, 25-10, in the fourth. Allen rejected a jumper from the line by Earl Boykins, and the stop led to a Rasheed Wallace turnaround 16-footer. Wallace scored 8 of his 14 points in the fourth, eschewing 3-pointers and doing damage from the post and free-throw line.

“We demanded the ball to get in the post,’’ said Rajon Rondo, who had 17 points and 12 assists. “We tried not to take any jump shots. The last couple of games where we were losing we had leads and we stopped getting into the post and tonight Kevin and Rasheed took us home by getting buckets in the fourth.’’

After enduring a stretch of struggles, the locker room that had been stone silent after three straight losses was loud and loose (the volume amplified by the presence of former Celtic Sam Cassell). They couldn’t erase the losses, but for the moment the win relieved the angst.

Ray Allen scored 17 points a night after going 2 for 10 and coming up empty on a 3-pointer at the buzzer against the Lakers.

“When you lose three in a row, you need any kind of win you can get,’’ said Ray Allen. “Right now our goal is to take it one game at a time going into the All-Star break. Try to win all four of the rest of these games just to get back into the rhythm, get back to the feel of winning games again.’’