Home is where heart was

Visitors getting too comfortable 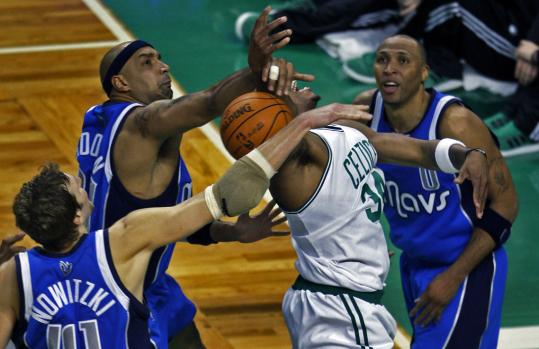 The Celtics’ home-court advantage is not what it used to be. A 99-90 loss to Dallas last night was their third successive loss at home.

“It’s about team defense, something we thrive on and hang our hat on. It’s just not a consistent night for a team to come in your building and shoot 50 or 60 percent. I look up and we shoot 50 percent, most nights we win those games. But when you allow a team to shot that kind of percentage it is going to be tough for any team to win.’’

Said guard Ray Allen: “Anytime we lose a game we blame it on the defense. The places where we didn’t get stops, defensively, we didn’t make great decisions down the stretch, we weren’t aware. And that’s not so much identity as much as playing with each other and communicating. We know who we are as players and as a team, so we don’t have to reestablish that, we just have to communicate, we just have to do our jobs.’’

Asked if visiting teams no longer feared playing in Boston, guard Rajon Rondo said, “I’m pretty sure they’re thinking it’s not right now. We’ve got to get back to defending the home court.’’

The Celtics are 11-7 at home, and have a 16-5 road record (12-2 against Eastern Conference foes) going into tomorrow’s visit to Detroit.

“It’s a learning lesson,’’ said Rasheed Wallace, who will be facing the Pistons for the first time since joining the Celtics as a free agent this season. “I’m not glad it happened but it will make us tougher down the road, because we know how we feel now - everyone here in the locker room is upset over [last] night’s game, over the last few games, the way we’ve been playing.

“But it’s a learning process. Once we get that bad taste out of our mouths, we know what we have to do to be able to succeed in the second half, going into the playoffs.

“I’m not worried about it at all. Each team goes through some pitfalls - nobody has the perfect season where everything goes right for them on defense or offense and come out with the win. It’s not like that. You’re going to have some pitfalls - trials and tribulations. But the key for a good team is you focus on the main goal and make it better.’’

Heinsohn honored
Celtics color commentator Tommy Heinsohn won the first Chuck Daly Award, presented by the NBA Coaches Association, during a halftime ceremony . . . Rivers’s pregame take on the Mavericks’ Dirk Nowitzki, who scored 37 points: “He’s a mobile ‘5.’ I don’t think there’s ever been a player like Dirk, honestly. He’s, literally, an original. There’s been 7-footers who can shoot, 7-footers who can pass, but there’s been none that can do all of them. They’re running plays that we run for Ray Allen and Reggie Miller, running him off triple screens. The next coming of that is [Kevin] Durant, they’re the only two guys like that.’’
Builder’s block
Rivers said the Celtics have not improved while contending with injuries to Marquis Daniels (wrist) and Kevin Garnett (knee). “We’re winning games but we’re not building,’’ Rivers said. “We’re not improving, because of the injuries. With that hand, we’re going to be careful, if [Daniels] takes it [cast] off and there’s still pain of any kind, any pain, we’re not going to let him play because we know where that leads - if someone hits it . . . and we know someone is going to hit it.’’ . . . Rivers on Stephon Marbury’s move to China: “He wanted to move on. I thought we had him for the right amount of time, if he came back he would have wanted to play more minutes, which I wouldn’t have blamed him.’