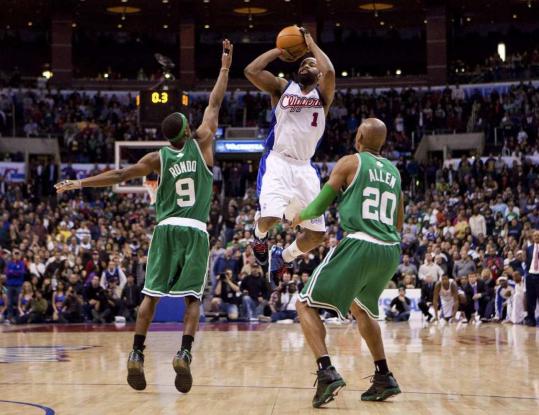 Garnett started last night against the Clippers after leaving late in the Celtics’ 86-77 win over the Magic after he took his tumble. Coach Doc Rivers called off Saturday’s practice and the club went through a walkthrough in its Los Angeles hotel yesterday morning.

The Celtics are benefiting from their depth as the season progresses. Tony Allen started Friday in place of Pierce and contributed 16 points in 22 minutes while Glen Davis made his season debut after breaking his thumb and played four minutes.

That youth and depth is essential to the Celtics, and executive director of basketball operations and general manager Danny Ainge disagrees with the perception that Boston is an old team with young players who are unproven.

“Our team is young, with Kendrick Perkins and Glen Davis, Tony Allen and Rajon Rondo, Billy Walker, J.R. Giddens; we’ve got a bunch of guys under 25 years old,’’ Ainge said last week. “That’s Doc’s decision of who he’s going to play and how many minutes. We know that our best players are in their 30s. [But] there are a lot of really young teams out there that aren’t winning that many games. I think we have a balance.’’

That balance has been tested because of all the injuries. Allen missed the first six weeks of the season recovering from August ankle surgery, but he has averaged 7.9 points and 3.1 rebounds in eight games. Davis missed the first 27 games before his brief appearance against Orlando.

Perhaps the injuries will allow the younger players to gain seasoning. Ainge said the team is fortunate that none of the Big Three has sustained a major ailment.

“The good news is that we’re not without somebody for the rest of the year,’’ he said. “These are very short-term issues and we’ll treat them to try to get those guys into the best physical condition they can be come April. Our objective is to continue to get better and to be prepared physically and collectively, chemistry[-wise] by the time playoffs start.’’

Ainge said he is pleased with the team’s 23-6 start, especially since it has yet to play with a fully healthy roster.

“I like our team,’’ he said. “I like the attitude of our team and the work ethic of our team. I like the chemistry of our team and so I’m very pleased where we are. I think there’s a level our team hasn’t reached yet that we’re capable of reaching and I’ve seen signs of that along the way that are very encouraging and we haven’t had our team full strength.

Silence is golden
Rivers said he didn’t even bother to ask Garnett whether he was ready to go last night. The forward was in the lineup and chugging away against the Clippers, finishing with 12 points and eight rebounds in 31 minutes.

Rivers said Garnett fell more on his lower back than his head, and that was the primary concern. When he heard nothing from trainer Ed Lacerte, Rivers assumed Garnett was ready.

“We work on the ‘don’t ask, don’t tell’ policy, that’s very important on our team,’’ Rivers joked. “Eddie would have said something. [Garnett is] sore, but other than that, he’s fine.’’

Pierce made a plea to join the team on the West Coast, but that won’t happen, Rivers said. The coach added that Pierce experienced some discomfort Saturday but was fine yesterday. His earliest date for a potential return is Saturday against Toronto.

“You just don’t know,’’ Rivers said. “You could feel great. I don’t know if it takes multiple days. Who knows with this stuff?’’

Clock watching
Rivers said he is content with the minutes of Garnett and Pierce, but he wasn’t pleased with having to play Ray Allen 43 minutes in the win against Orlando. He is averaging 35.8 minutes per game this season, the most of any Celtic. He played 39 minutes last night.

“Ray played [almost] the entire game the other night and that’s something we’re not going to do very often,’’ said Rivers. “I would like to lower his minutes.’’