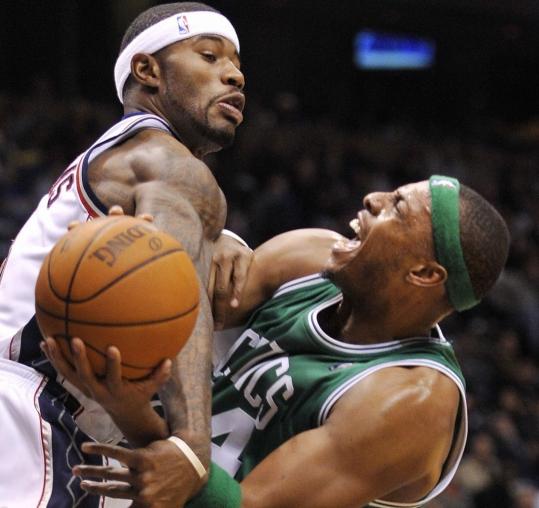 EAST RUTHERFORD, N.J. - At the end of every season, Doc Rivers gathers up his coaching staff to talk about the draft. The previous year’s draft. It’s sort of like a fantasy draft, only everyone has on their hindsight goggles.

“It’s amazing how much different those numbers are,’’ said the Celtics coach. “We’re much smarter by the end of the year on the draft.’’

Two years ago, the Celtics had a chance to draft Chris Douglas-Roberts, who had made a name for himself with Derrick Rose on a Memphis team that went to the national championship game. They had the last pick in the first round, and Douglas-Roberts was still on the board.

“We talked about him,’’ Rivers said, “but obviously went in another direction.’’

They took J.R. Giddens, a binge scorer in his time at New Mexico, but as a rookie, Giddens couldn’t crack the built-for-a-title roster the Celtics had assembled and spent much of the season in the D-League.

Meanwhile, the Nets took Douglas-Roberts with the 10th pick in the second round, a selection that looked like a steal then and like an even bigger one through five games of this season. Douglas-Roberts was averaging 15.6 points and 4.8 rebounds going into last night’s game against the Celtics here.

When word broke that he was forced to sit out after testing positive for swine flu, Rivers joked, “He’s not going to play well tonight, I can guarantee you.’’

But Rivers looked at Douglas-Roberts and Brook Lopez, the Nets’ first-round selection that year, and saw how much better they had gotten since draft night.

“It’s amazing, in one year, just guys getting through their rookie year, how you can see the improvement,’’ Rivers said. “And it was clear watching those two players that they have.’’

“Who knows? You know. The draft, beauty’s in the eye of the beholder, right?’’ Frank said. “There’s always different reasons for different things.

“We targeted him as a guy we really liked and felt good about having, regardless of what pick we got him at.’’

With Vince Carter and Richard Jefferson in front of him, Douglas-Roberts had to wait his turn, but their departure this summer made room for the 6-foot-7-inch Douglas-Roberts to blossom.

The Celtics did not pick up the team option for Giddens last week. He was the only player in his draft class to have his option declined. But Frank found it difficult to second-guess the teams the Celtics have put together the past three seasons.

Work ahead
Opportunities to practice have been slim. The Celtics have had only four free days since the start of the season, and have managed just three practices.

With a chance to get consecutive practices in the next two days, Rivers pointed to a couple of things that needed improvement.

“Defensive rotations,’’ Rivers said. “We absolutely have to get back to that. Offensively, more movement. I thought we were just standing around a lot today.’’

Rajon Rondo added, “Team-wise we need to get guys rested. But practice is important. Practice makes perfect. So we’ve got to continue to practice and learn our rotations and get better.’’

Lineup juggling
There were points when Rivers had to be creative with the lineup. One grouping had Giddens, Eddie House, Rasheed Wallace, Shelden Williams, and Brian Scalabrine. And in the final minutes, he kept Rondo on the bench, making Paul Pierce the de facto point guard with Ray Allen and House on the floor with him. “We got a nice little rhythm going,’’ Rivers said. “The floor was spaced so much with Ray and Eddie on the floor, it allowed Paul and Eddie to get free.’’ It’s the luxury of having a deep lineup. “You just have kind of a different identity,’’ Scalabrine said. “There’s going to be nights like that when Eddie House is out, and we’re going to have a totally different identity. The bottom line is you’ve still got to execute the plays.’’ . . . sightings: CBS’ NFL pregame team of Shannon Sharpe, Bill Cowher, Dan Marino, and James Brown caught some of the game from the baseline and Yankees center fielder Melky Cabrera was also on hand.