Full speed ahead for Garnett 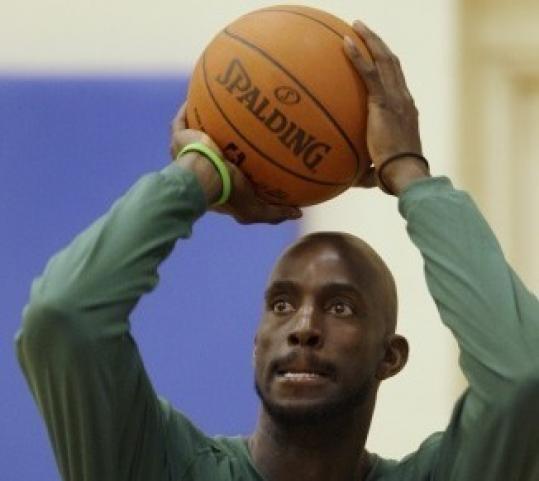 NEWPORT, R.I. - Aches and pains do not discourage most professional basketball players. The Celtics’ Leon Powe provided a graphic example late last season, as he tore an anterior cruciate ligament but attempted to run the court until his left knee simply would not allow him to.

Kevin Garnett adopted a similar mind-over-matter stance as he played with a bone spur in his knee. It is difficult to measure pain, but the size of the spur - described as nearly as big as a walnut - provides an indication of just how much Garnett might have been suffering.

Garnett attempted to perform with the injury, returning for second-half warmups after hobbling off the court in Salt Lake City last Feb. 19. The Celtics then allowed Garnett to return to action for four games in March, during which he was all smiles. But he was masking his condition, and coach Doc Rivers ordered him to cease and desist.

But Garnett was not just grinning yesterday, following his first official practice since surgery. He was the gregarious, guffawing Garnett. Patellas and popliteus tendons were forgotten. Garnett trained at full speed, along with everyone else, through about three-quarters of the two-hour workout.

“He looked great,’’ Rivers said. “I took him out with about 75 percent of practice gone and just told him to sit down. He didn’t like that, obviously.

“I just think we’re going to be together, hopefully, until mid-June. No use wearing him out in one day. He looked great. Actually, for a first practice I thought it was terrific. When he’s on the floor, you know he’s on the floor and makes a difference with everybody.’’

Rivers expects Garnett to play in most of the team’s eight exhibition games, starting with an Oct. 7 matchup against Houston in Hidalgo, Texas.

“I think he has to play,’’ Rivers said. “I always have guys miss one or two games in preseason, anyway, so he’ll be on that same schedule. But, as far as playing, he’ll play 24 minutes, in that area.’’

Rivers clearly wants to have Garnett pace himself during the preseason, and the two differed on how that was accomplished yesterday.

“I thought Doc tried to kill me a little bit,’’ Garnett said. “But, you know, first day of camp, it went well.’’

Told that Rivers said he was reluctant to be removed, Garnett laughed and said, “If he says so.’’

Nor did it seem Garnett was eager to depart the Salve Regina University gym.

“You know, all in all, it was fun to just get back out there with the guys, the drills,’’ Garnett said.

But Garnett is attempting to pick his spots instead of going all out all the time. He has added the word “patience’’ to his vocabulary.

Asked about feeling any hesitancy because of the surgery, Garnett replied, “None whatsoever. I think everybody is trying to be precautionary, trying to be patient with it all. I’ve got to be patient. When you’re going out and competing, and you lose this drill and want to sort of redeem yourself, you know, I take my work very seriously, and I take getting better very seriously. I’m gaining patience every day - believe that.’’

Talking about having to view the playoffs from the bench last season, Garnett said, “You have something you do, you love it and care about it and you’re absent from it. I’m not that good of a cheerleader and with pompoms and that stuff, don’t think I look good in a skirt. I’m in a jersey playing, out there trying to be positive, helping my teammates, that makes the first day more enjoyable.’’

Garnett’s optimism was further fueled by the addition of Marquis Daniels and Rasheed Wallace on the second unit.

“Marquis and Paul [Pierce] have the same kind of herky-jerky slow game,’’ Garnett said. “Very, very effective. I like our team, I like our team a lot. Still got to see how it meshes, the chemistry and how it comes together. But, so far, so good.’’