High-scoring Hudson is the pick at No. 58 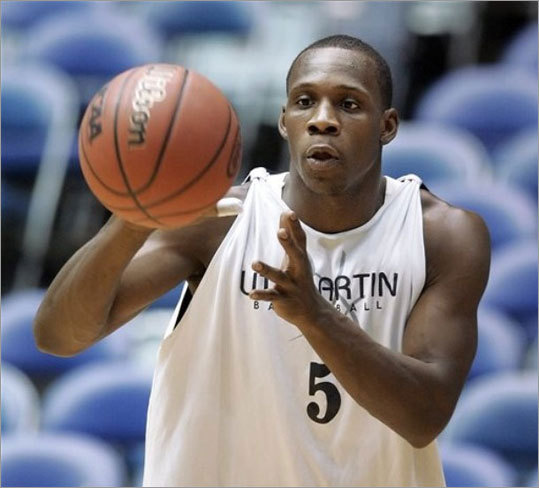 (AP) Hudson played for the University of Tennessee-Martin and was named Ohio Valley Conference player of the year after averaging 27.5 points per game (second in NCAA Division 1 scoring) last season. He also compiled the first quadruple-double in Division 1 history, with 25 points, 12 rebounds, 10 assists, and 10 steals.
By Frank Dell’Apa Globe Staff / June 26, 2009
Text size – +

Before selecting Lester Hudson in the NBA draft last night, Celtics president of basketball operations Danny Ainge said the 58th pick would have about a 3 percent chance of being in the playing rotation. Until emerging as a high-scoring guard at the University of Tennessee-Martin, though, Hudson’s odds of having a career were even more remote.

The 6-foot-3-inch Hudson, 24, experienced academic difficulties in high school in Memphis, failing to earn a GED until after he entered Southwest Tennessee Community College. Most four-year colleges were reluctant to recruit him because he was required to sit out a season after his junior college career, but Tennessee-Martin took a chance. Hudson was named Ohio Valley Conference player of the year after averaging 27.5 points per game (second in NCAA Division 1 scoring) last season.

“He’s a tough kid, but I don’t really care about those kind of things,’’ Ainge said. “I just see what I see on the court and just how hard he competes. He instigates physical play with the ball in his hands. We think he’s got a good chance.

“He can handle the ball and he can play with the ball in his hands as a scorer. He’s a strong, physical player, he has extremely long arms for his size, and he’s a terrific shooter and very physical scorer. There are guys who score who are pretty shooters. And guys who are physical, they get by their guy, they bump and push away and fadeaway, and instigate physical play with the ball. He’s a physical scorer and also he can shoot over the top of defense.’’

“I talked to him [Wednesday] night, [Wednesday] afternoon, [yesterday] morning,’’ Rivers said while preparing for last night’s draft. “I’m very frank and honest with Rondo. I said, ‘What the hell you doing here? You should be in one of these other cities.’ He was laughing. I brought up the rumors and why, and I don’t think it was a bad thing.’’

Deals involving Rondo have not been discussed at the executive level, according to Ainge. But Ainge said no Celtic is “untradeable.’’

“When you don’t win the title, people are looking at your team,’’ Rivers said. “They want to make a move, see if you will panic. A lot of teams were very aggressive toward us. I think Danny did his job. You’ve got to explore who has value and what you can get.

“Rondo’s gotten a lot of press lately. It’s been interesting reading for me. I didn’t know he had done so many things. Rondo will be fine, I have no problem with Rondo. I think Rondo can be an All-Star. I don’t think he’s an All-Star yet, but I think he will be.

“Being the point guard, he has a bigger role, in the fact he has to get along with everybody on the team, and that’s something he has to learn. And that’s difficult, especially with the personalities he has to deal with at his age. If he was 30 and had these issues it would be a problem; being [23], I don’t see it as much of a problem. You can be a loner as long as you’re not a loner on the floor. I told him they don’t have to love you off the floor, they have to respect you. He’ll get that.’’

Ainge, meanwhile, said he spoke to Rondo yesterday about the comments Ainge made regarding the guard on WEEI Wednesday morning.

On how the conversation went, Ainge said, “Good. I don’t get the sense that he interpreted things the way everyone else did.’’

Never say never
Rivers did not rule out a draft choice being a factor with the Celtics. “If a young player can help our team, we can [sign him],’’ Rivers said. “If we think he is a good fit for the team. Obviously, we’re looking at the free agent market more.’’

“I don’t know if both have a chance to play,’’ Rivers said. “They are almost the same position, they are almost playing against each other. One of them will help us. Billy was ahead last year, but J.R. works his butt off. He’s as hard-working a kid as I’ve seen.’’

Count him in
Celtics forward Glen Davis is among 25 players who have accepted invitations to attend USA Basketball’s minicamp July 22-25 in Las Vegas. Players taking part will get consideration for the team that will play in the 2010 world championships and 2012 Olympics. Marc J. Spears of the Globe staff contributed to this report and material from the Associated Press was used.