To play is the thing for Celtics' Marbury 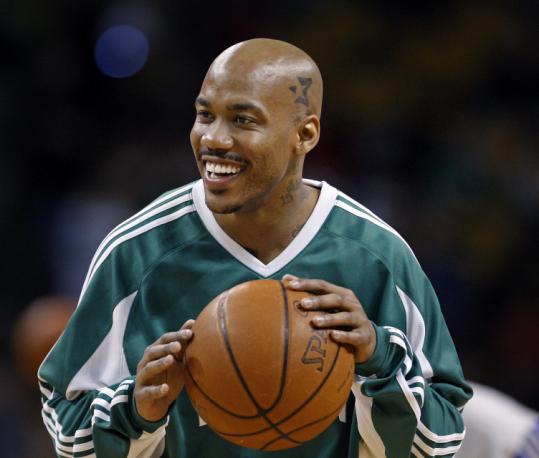 Stephon Marbury is quick to point out that playing at the Meadowlands isn't the same as playing at Madison Square Garden.

"Nowhere near it," he said.

But considering he had sat out the entire season before the Celtics signed him last Friday, Marbury also pointed out that the verb was far more important than the nouns in that sentence.

"I'm just happy to be playing," he said. "It doesn't matter where we play."

Marbury spent three seasons in New Jersey, from 1998-2001. He spent the past four on the other side of the Lincoln Tunnel with the Knicks. With the Celtics all done with the Knicks this season, tonight's road game against the Nets is as close as Marbury will get to flashing his new uniform in front of the fans in his old city.

"We're not going to make it an event," said Celtics coach Doc Rivers. "We're coming to play basketball. We'll let them talk about the past. We're just going to keep focusing on what's ahead of us."

A Nets spokesman said they were expecting more media than normal for Marbury's return, but Paul Pierce was as unmoved as Rivers by the circumstances.

"He played for Jersey for a little while and he played for New York, both of the teams out there," Pierce said. "But for me, it's us trying to get back on the winning track. I don't really get caught up in the hype and all of the hoopla of the New York media."

The Nets (26-33) won 26 games in Marbury's last year with them. They dealt him to Phoenix for Jason Kidd, then won 52 games the next season and lost to the Lakers in the Finals. It's sort of a trend with Marbury. The Knicks won 23 games last season; without Marbury, they've won 24 games already this year.

Rivers played nearly three seasons in New York during the early '90s, so he's familiar with the culture. But only to a degree.

"I wasn't a star," Rivers said. "I played on a very good team. I've never been in a situation where you're the best player on the team, you're supposed to carry the team, the team's not very good and you get blamed for everything.

"Obviously, he had to answer to some of the things he did, too, but having said that, that's a lot of pressure."

Considering the Celtics brought in Marbury at a time when they're trying to rebound after dropping two of their last three games, he said his priority is fitting quickly into his role.

"I'm not nervous about playing," he said. "I just want to get the system down. That's the toughest part. Not knowing. At my position, it's difficult. Once I get that down, I mean, two days of practice is going to be a relief for me, I get to wear myself down. Run as hard as I can, just get tired."

Mikki Moore is in the same situation with his transition, getting used to slight adjustments like popping off picks instead of rolling, or breaking defensive habits he had gotten used to in Sacramento.

"Everything's going pretty good about learning," Moore said. "I've just got to get my explosiveness back and my timing back from sitting on the bench so long. I've got to stop moving mechanically and just go out there and play with effort and don't worry about making mistakes."

Moore also will be making a return to the Meadowlands, having played 79 games for the Nets in the 2006-07 season. He plans on having 20 family members and friends in the stands.

"I've still got fans in New Jersey," Moore said. "I still get love when I go there. It wasn't my decision to leave. The team made the decision. So I won't get too many boos or anything like that. It'll feel good going back and playing in front of those fans."

Marbury, too, will have fans. Their reaction likely will be mixed. It'll be a taste of what he would have gotten had he returned to Madison Square Garden, an experience he said he would have looked forward to.