Celtics' Davis takes a day off, and we tag along 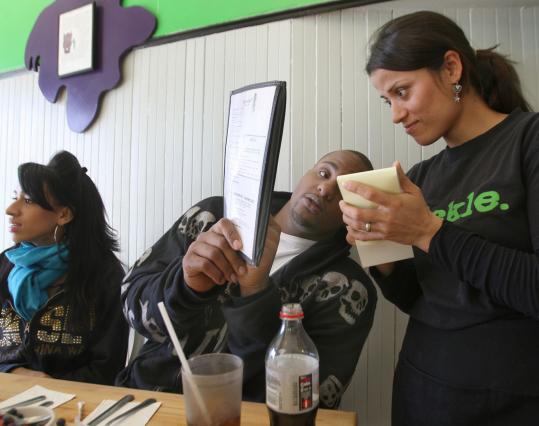 It's feeding time for this Baby, at Waltham's In A Pickle Restaurant, along with his girlfriend, Jenna Gomez (left). (Stan Grossfeld/Globe Staff)
By Stan Grossfeld Globe Staff / March 4, 2009
Text size – +

WALTHAM - Big Baby gingerly slides his size-16 flat feet into the warm pedicure tub at T & T Nails. Suddenly his face contorts in pain, as if the Celtics' 6-foot-9-inch power forward has been scalded. The nail technician looks on in horror until Glen Davis breaks out laughing. Then she starts laughing, too.

No harm, no foul.

Welcome to Glen Davis's Day Off.

These are heady times for the charismatic former LSU star, who is in his second NBA season. He earned a championship ring in his rookie campaign, and this year he has stepped up his game and is getting more minutes. When Kevin Garnett missed a Feb. 3 game against Philadelphia because of illness, Davis started and recorded his first NBA double-double (12 points, 11 rebounds in 42 minutes).

"I want to make it so Doc [Rivers] plays me every day because he has to play me every day," says the 23-year-old Davis, who is averaging 5.4 points in 18.5 minutes.

No Celtic has put more time in the gym. "I want to be an All-Star," he says.

After the Celtics won their 17th world championship last spring, Davis did not return to his home in Baton Rouge.

"I really didn't celebrate that much, maybe a week in the Bahamas, and then I started working on my game," he says. "I took a lot of jump shots. I counted them - 20,000 shots the whole summer."

Spend a day with Glen Davis and one thing becomes clear. There is no set schedule.

"I'm a spontaneous person, I'll be honest with you," he says.

In the morning, he's a tad grouchy. For starters, he missed breakfast - something he doesn't like to do.

"I have this concept," he reveals. "You've got to eat like a king in the morning, eat like a worker for lunch, and eat like a peasant at night. So I try to stick to that."

But not on this February day. He is running slightly late. It's 10:30 when he reports to the Sports Authority Training Center in Waltham, unfolding slowly out of an Acura driven by his girlfriend, Jenna Gomez. Davis suffered a concussion in December when he lost control of his SUV on an icy stretch of the Massachusetts Turnpike while heading for a game at the Garden.

Today in the gym, he has resistance bands attached to his waist and he's pulling Celtics strength and conditioning coach Bryan Doo in an exercise designed to add acceleration strength.

"He's the strongest guy on the team," says Doo. "People don't realize how explosive he is."

Or how hungry. Davis is down 40 pounds from his LSU days and his 289-pound frame is now mostly muscle.

He does lateral exercises and lifts weights without breaking a sweat. He says he can bench press 415 pounds. That's roughly the combined weight of teammates Paul Pierce, Rajon Rondo, and maybe a leprechaun.

Meeting up with Shaq
Gomez, the former cocaptain of the Tufts women's basketball team, picks up Davis around 1 p.m. and they drive to the In A Pickle Restaurant in Waltham. Davis walks up Main Street with the hood pulled up (in the noon sun) on a jacket that has a dozen black and white skulls. He looks like Darth Vader.

Tempted by the chocolate muffins, he instead orders a fruit bowl and two chicken wrap sandwiches, washed down by a Diet Coke. Here, nobody bothers him. That's not so everywhere.

Davis says he feels "blessed" that he won an NBA championship in his first year. The team bonding started in Rome, he says. So did the hazing.

"When I was in Italy, I had to eat an octopus, and that was disgusting," he says. "It was kind of raw. Basically you have to pay rookie dues, which is a hassle. Waking up at 5 a.m. and going to get coffee, going to get doughnuts. Getting picked on . . .

"The guys on the team have a wonderful understanding of family and what it takes to win a championship."

Davis laughs. He hasn't been dealt the greatest hand in life. His mother loved him, but she was a drug addict. He has never met his father.

What if his father surfaced now?

Davis rose above the adversity and was mentored by AAU coach Collis Temple Jr., the first black player at LSU. Temple helped the teenage Davis meet his idol, Shaquille O'Neal.

Shaq jokingly calls Davis, who followed in his footsteps at LSU, "my son."

"I was 14 or 15, and I went to his house and I was hanging with Shaq," Davis says. "He says to me, 'Let's go outside and wrestle.' We started wrestling. I pinned him down. He couldn't budge me."

"He picked me up and body-slammed me," says Shaq. "That's when I knew he was for real."

Davis and the Celtics recently beat Shaq's Phoenix Suns at the Garden. At one point, Davis planted himself in front of the basket in front of a runaway Diesel to get the charge call.

"I was thinking, 'I'm going to die,' " says Big Baby. "He later told me how proud he was of me. Shaquille and Kevin [Garnett] are my best all-time players. To be on the same team as Kevin Garnett is such a privilege."

No hiding his emotions
Davis says there never was a problem between himself and the super-intense Garnett. On Dec. 5, after the Celtics' second unit squandered much of a 25-point lead against Portland, Garnett pulled Davis into the huddle during a timeout and berated the team. Davis was later seen on the bench, weeping, with a towel draped on his head.

He insists the widely publicized incident was much ado about nothing.

"I hold myself up to high expectations. I want to be the guy out there that's not making mistakes. [But] the game of basketball is so fast you're going to make mistakes. When he talks to the team and my team is out there not doing well, I put myself at fault."

The "Big Baby Cries" headlines and You Tube clips did not embarrass him.

"Never," he says. "I'm an emotional player. I feel the game. I love the game, and it gets that way sometimes. It's about what you do after. How do you bounce back? I'm not ashamed. I'm never ashamed."

"It wasn't a good thing," says the forward-turned-analyst. "It was a great thing. It seemed to light a fire under him, and he's played better. He's more focused."

Davis says he has no close friends on the team but gets along with everybody. His mentor is his coach, Rivers.

"I think, most of all, when I'm farther down the line and I look back at what he put me through, I'll be so thankful," says Davis. "I just want to go out there and be an energy guy, that's my role."

But he marches to his own drummer. He does impulsive things, such as deciding that everybody should get a pedicure next door immediately after lunch. Sometimes he even surprises the fans. Last year in the playoffs in Detroit, he saw some fans playing touch football near his hotel. So he approached them.

Soaking in the attention
Inside T & T Nails, he settles into a big leather seat next to his girlfriend and relaxes, checking his BlackBerry.

"My big toe looks dead," he tells the manicurist.

Told that some men think pedicures are for sissies, Davis shakes his head. Michael Jordan loved pedicures, he says.

"Everybody is entitled to their own opinion," says Baby, clearly enjoying the process. "I use my hands and feet every day. Ray Allen taught me you have to take care of your body."

Davis says he might take in a movie later, and he accurately predicted that "Slumdog Millionaire" was a lock for best picture. He also loves the works of William Shakespeare, though he is particularly shocked by the wickedness of Lady Macbeth.

Worked out, fed, and now groomed with clear polish, Baby returns to his Waltham home. On the right of the NBA-sized sofa is the elliptical machine and on the left the Xbox 360 controller and big-screen TV. Big Baby chooses the middle, where he curls up with his mini-dachshund, Duke.

"I want to live forever in the game of NBA basketball, and you've got to work hard to do that."