THIS STORY HAS BEEN FORMATTED FOR EASY PRINTING
Celtics 109, T'Wolves 101

His 36 points make up for Garnett's absence 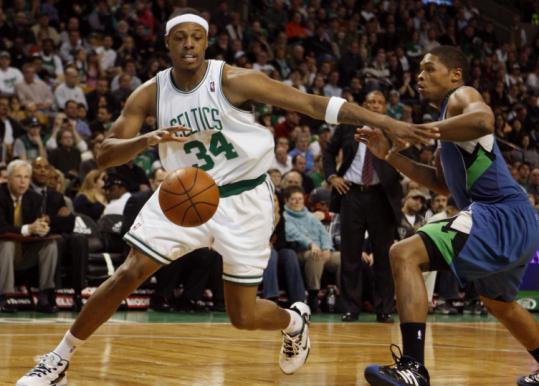 Paul Pierce's recent performances have been marked by defending and passing rather than scoring. In fact, Pierce had more assists than field goals over three games last week.

But Pierce returned to his virtuoso, take-over-the-game, shot-making form in a 109-101 victory over the Minnesota Timberwolves yesterday at TD Banknorth Garden, the Celtics' 11th successive victory.

The main reason for Pierce's transformation was the absence of Kevin Garnett (flu), but he also might have been influenced by reminders of the days when many of the current Timberwolves were his Celtic teammates and he was the one and only go-to guy.

"I wanted to come out a little more aggressive," Pierce said after scoring 36 points. "Especially attacking the rim, and try and get some points in the paint, knowing the big fella wasn't there and we were probably going to need a little more scoring."

Garnett has now missed two Celtics-Timberwolves games (he was injured for a visit to Minneapolis last season) since leaving Minnesota in a trade for five players and two draft choices, and his status has not been determined for tomorrow's game at Philadelphia.

But with Pierce exploiting mismatches on the post and Glen Davis giving a composed performance (career-high 37 minutes) in place of Garnett, the Celtics (40-9) were in command for most of the contest. Former Celtic Al Jefferson (34 points) kept Minnesota in contention, but he failed to score in the final 5:20 as the Celtics clinched the result.

"[Pierce] didn't get a lot of due the other night against Detroit but I thought he won that game for us in the one stretch where he was the only guy with the bench," Celtic coach Doc Rivers said. "And he didn't score any of those, but his plays led to scores, and he knew what he was doing. He can almost sense when we need a bucket, or when he needs to take over games."

Davis (12 points, 6 rebounds) and Kendrick Perkins (8 points, 11 rebounds) had their hands full with Jefferson and Kevin Love on the inside. Leon Powe provided relief with three field goals in a three-minute span early in the final quarter.

"They're going to be good," Rivers said of the Timberwolves. "Offensively, we played extremely well. Defensively, [it] wasn't one of our better efforts. But I thought a lot of it was them. Jefferson is very difficult to guard. Love is going to be a monster - he really is. He's a pain to keep off the glass. We had two and three guys trying to keep him off the offensive glass and he still got his hands on some."

Jefferson's dunk cut the Minnesota deficit to 94-89 with 5:20 remaining but that would be his final offensive contribution. Ray Allen provided a 7-point lead with Pierce following with two foul shots with 4:18 remaining.

"[Pierce] will score 36 if Kevin was out there," Allen said, "but he made big plays down the stretch. He probably could have scored even more. We hit a lull at some point in the third quarter and I think that was the point where [Rajon] Rondo would throw an alley-oop to Kevin or we'd go in the post and he'd make a shot for us. So, it was just an adjustment."

The Timberwolves (16-30) were within 101-95 on a Randy Foye 3-point play with 3:09 remaining. Davis missed against Jefferson's defending, and Minnesota had a chance to cut the deficit to 4 points. But Jefferson was off target and Perkins fought off Love for the rebound, the Celtics then took an 8-point lead as Pierce scored over Sebastian Telfair with 2:24 remaining.

Minnesota continued to fight back, though. And the outcome was not secured until after Rondo controlled possession of a Love-Pierce jump ball and Davis converted his miss for a 107-97 lead with 43 seconds left.

"You just have to go out there and be composed and be a professional," Davis said. "I made some mistakes, but you just have to keep playing. I felt like I got a lot of experience in this game."

The Celtics led by as many as 21 points early in the second half, mostly thanks to a 33-20 second quarter.

"These early starts," Rivers said of the noon tip, "I really believe if you can get out of the gates quickly you can catch teams off guard, because it's just so unusual to play at this time of day."