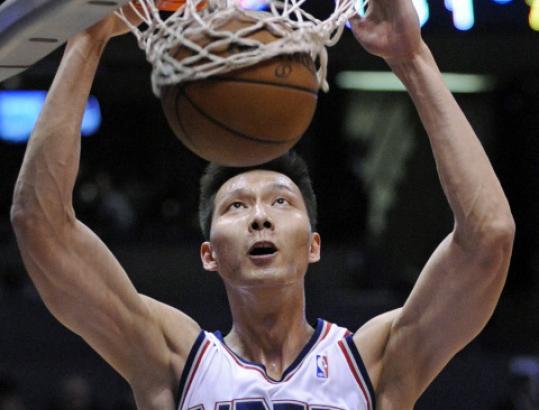 EAST RUTHERFORD, N.J. - With each weekly update of the NBA All-Star balloting, Celtics fans may be asking themselves one question: Who is Yi Jianlian?

The New Jersey Nets power forward, whose name is pronounced EE jee-EN-lee-EN, is projected to be the next great player from China, after Yao Ming. Right now, the 7-foot, 238-pounder seems more suited for the Sophomore team in the Rookie Challenge than the All-Star Game. But with a home nation of about 1.3 billion and Nets fans backing him, Yi is on Celtics 11-time All-Star Kevin Garnett's heels for the second starting forward spot on the Eastern Conference team.

"It's only because there are a lot of Chinese people and a lot of fans," said Yi, who missed last night's game against the Celtics with a broken finger. "Even Yao his first time, the same thing happened. In America, there are a lot of players. In China, it's only me, Yao, and [Lakers rookie guard Sun] Yue here.

"For me, I'm just focusing on the court and playing for the Nets right now. I'm not really focused on All-Star. I appreciate the guys who vote for me and the Chinese fans."

While voting in NBA arenas has ended, fans can still vote online on NBA.com through Monday. Since the release of the first results, Yi has been behind Cleveland star LeBron James and slightly behind Garnett. Yi is averaging respectable numbers of 10.5 points, 6.2 rebounds, and a .396 3-point percentage, but his statistics don't rate alongside those of Toronto's Chris Bosh, the Celtics' Paul Pierce, and Indiana's Danny Granger, who trail him in the balloting.

"It's a popularity contest," Pierce said. "Being that China has more people than anyone in the world and a lot of NBA fans, we saw what effect that had when Yao came in. They support their players."

Garnett, who was the leading vote-getter last season, initially heard about Yi's challenge from Pierce in Washington Dec. 11. Prior to that game, Celtics guard Ray Allen, referring to the Yi situation, said the NBA should consider changing the balloting to include fans, media, and general managers to make it more fair.

"It's not about skill, so I'm not worried about it, if that's who the fans want to see," said Garnett Dec. 11.

For a budding star like Yi, it's an honor to be mentioned in the same breath with the 2004 NBA MVP.

"[Garnett is] the best power forward in the league," said Yi. "He's pretty good on defense and offense. He plays good on both ends."

Biding his time
While Yi dreams of following in Yao's footsteps and becoming the second player from China to make an All-Star team, he would prefer it not be this season.

"I just appreciate all the guys that vote for me," Yi said. "The main thing is playing games this season."

Despite Yi's words, Yao has no problem with the possibility of Yi being named an All-Star starter now.

"[Yi] doesn't want to be in that position," Yao said. "Think about it. He did not vote himself. If anybody says he doesn't belong there, ask the fans. I remember KG said in the newspaper, 'This is not first-team All-NBA - it's an All-Star Game.' If fans want to watch the game, they want to watch the team they built. That's how it is."

Then-Lakers center Shaquille O'Neal was a 2002 All-NBA first-team selection. But with the arrival of Yao in 2003, the votes poured in from China and he ended up passing O'Neal for the West starting position. Chinese votes have also aided Tracy McGrady and Steve Francis, Yao's current and former teammates.

"It's tough. Actually, I was nervous, very nervous to have Shaq on the bench," Yao said. "I felt like sometimes, 'Do I belong here?' But Yi has to understand that he's not just playing for himself, he's playing for those fans who voted for him.

"I know there's a lot of talk about who should play in the All-Star Game and who should be starting. But I think you have to treat an All-Star Game just like a party. If you're there, have fun."

When Yao and Yi played their first NBA game against each other last season, it drew more than 230 million Chinese viewers.

In the three games before he was sidelined, Yi was playing All-Star-caliber ball by averaging 19.3 points and 7.3 rebounds and nailing 4 of 9 3-pointers. New Jersey coach Lawrence Frank believed Yi was starting to come into his own and play a more complete game. With the Guangdong native's recent offensive surge, Nets executives began believing Yi might get voted in as an All-Star starter.

A bad break
The Yi campaign, however, could have been halted when he broke his right pinkie after totaling 16 points and four rebounds in 25 minutes at Milwaukee last Friday. Yi said Yao called him to check on the injury.

"It's like bad luck," Yi said. "But it happened already. You just have to take your time and hang in there. I'll probably be back in like four weeks."

Among Chinese athletes, none stands taller literally and figuratively than the 7-6, 310-pound Yao. The five-time All-Star was the face of China during the 2008 Beijing Olympics as the star of the men's national team. The Shanghai native also has lucrative endorsements from several companies worldwide and reportedly has been the richest celebrity from China for years.

Yi, however, seems more popular with China's young generation. Yi's game is also more attractive than Yao's as he is a quality 3-point shooter and very athletic, evidenced by his putback dunk over the United States' Carmelo Anthony in the Olympics.

"There are more young fans and young kids [in China] that consider Yi an idol because he's handsome, has a beautiful face, and is younger," China Central Television's Li Tian said. "He's a different kind of player. Yao is a huge size, very tall. But Yi is very fast. They're very different.

"Yao is the standard and someone who really stands for the country. During the Olympic Games, Yao handled the flag. Yi is another kind of idol with young kids, middle school, high school. Even with the younger girls, it's different. He's not married. Many of the younger kids think he's better."

Yi acknowledged that there is a lot of pressure on him to live up to the expectations placed on him to be a special NBA player.

"But you have to play with that," he said. "I have to focus on the game and play hard every night. That's all I can do. All I can control."

Despite hopes of playing in a bigger market, Yi was selected with the sixth overall pick in the 2007 draft by Milwaukee. He refused to sign with the Bucks for several months before agreeing to terms Aug. 29, 2007. Through 66 up-and-down games, he averaged 8.6 points and 5.2 rebounds and did not make the All-Rookie first or second team.

"He is a 7-footer, so he needs to get a little bit stronger, stronger than now, so he can play physically inside and not just be a face-up shooter," Yao said. "You don't want him to just be a 3-point shooter, or a guy just shooting 16- and 17-footers. Because of his size, he can go inside a little bit more to be more effective."

Nets general manager Kiki Vandeweghe said, "[Yi] has not played a lot of basketball. But he has a nice stroke on his jumper, he's 7 feet every day, and he has a great upside."

With a new Bucks front office on board last summer, Yi and forward Bobby Simmons were dealt to New Jersey for guard Richard Jefferson June 26. While Yi got his wish of going to a bigger market, it was humbling to get dealt after his rookie season.

"I was just surprised," he said. "Right now, I just forget about it and enjoy playing for the Nets."

International impact
The arrival of Yi has brought more attention and money to the Nets worldwide - with more coming.

Chinese companies such as China, the sports apparel company PEAK, and the popular website Sina.com (which has a Yi blog) are sponsors of the Nets now. More sponsorships are on the horizon. Yi does postgame interviews with Chinese media in front of a Nets-Nike sign in Mandarin and then takes questions from American reporters in English. About 40 Chinese media members attended Houston's game at New Jersey Dec. 22. There are eight reporters covering Yi full-time. Yi has made several community appearances in New York's Chinatown and has another scheduled tomorrow.

"The marketing is bigger, but you have to play good, too," said Yi, who currently has endorsement deals with Nike, Sina, Wrigley's, Topps Trading Cards, and Yili, a dairy company.

"Yi's potential is limitless," said Roy Lu, an agent with the William Morris Agency who handles Yi's marketing. "He is one of the most popular endorser candidates for Chinese domestic buyers and especially to those who are interested in breaking into the international markets and vice versa."

The top 10 vote-getters through last Thursday's final update from the NBA.