Rivers wants to keep time on his side with Garnett 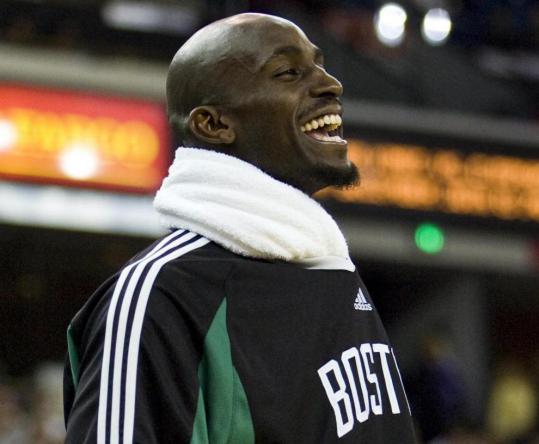 After tiring himself out in back-to-back games last week, Kevin Garnett was happy that he could watch most of Sunday's win over Sacramento from the sideline. (Max Whittaker/Reuters)
By Marc J. Spears Globe Staff / December 30, 2008
Text size – +

SACRAMENTO - With the Celtics dominating in the third quarter against the Kings Sunday, the buzzer sounded at the 4:23 mark and Kevin Garnett was taken out of the game, his team ahead, 80-42. With his double double already in hand (21 points, 11 rebounds), the Sacramento fans respectfully applauded as Garnett walked slowly to the bench. As for coach Doc Rivers, the statistic he was most happy about was 23 minutes of play.

Garnett's minutes have been going up of late, so Rivers is making a concerted effort to reduce them in hopes of getting better production from the 11-time All-Star.

Rivers said the idea is to keep Garnett about where he was last season.

Said Garnett, "Whatever Doc says, I'm with. I wish I was perfect. But I feel really, really good. I haven't always had the chance to say that this year."

Before the Sacramento game, Garnett, 32, had played at least 37 minutes in four of the previous seven games. His minutes became a major concern for Rivers during the Celtics' first back-to-back losses of the season, to the Lakers and Warriors last week.

In the 92-83 loss to Los Angeles on Christmas Day, Garnett had a solid game with 22 points and nine rebounds in 37 minutes. But the next night the fatigue factor set in, and he had just 14 points and four rebounds in 38 minutes in the 99-89 loss at Golden State.

"The Lakers game was kind of weird," Garnett said. "They came out with a lot of calls and I thought a lot of those calls were questionable. Against the Warriors, I felt like we were a little fatigued. I felt like I wasn't even in the game.

"I told Paul [Pierce] and Ray [Allen] that I could have stayed at the hotel after the performance I gave. I pride myself about playing hard every night and I felt like I have taken a step back."

The Celtics took Saturday off and didn't have a shootaround before Sunday's 6 p.m. game in Sacramento. With lots of rest, Garnett felt a lot fresher and played that way.

"[Sunday] was bigger for me, just coming out with a lot of energy and being able to be active, rebound, blocking shots," Garnett said. "Playing, not necessarily thinking. I'm not a perfect individual. But I do work hard and I do strive for the best.

"It was just good to feel refreshed and go out there and do the things I know I can do. After having a game like that in Oakland, you want to play immediately. But it's good to have a day of rest. It totally helped. Any time you get to watch your teammates play, especially the ones that don't get a lot of opportunities, it's always a good thing."

Allen said, of all the starters, it's most important Garnett rested.

"We like him on the floor, but when we don't have to play him, I like him to take it easy because he definitely creates a presence out there," Allen said. "It definitely seems between myself and Paul we are somewhat interchangeable. We're going to need [Garnett] down the stretch."

Rivers noted that he might get the best out of Garnett by playing him in maximum eight-minute spurts.

"Playing less than eight minutes in a row is solid because it gives him a chance to come back in the game [stronger]," Rivers said. "The longer the stretches he has on the floor, the less he has coming back in. If we can keep doing it, it would be great."

When asked to grade his play this season, Garnett said, "At times I've been a B. Probably at a C right now. I could play better, but I'm playing within the scheme of what Doc has talked about.

"I think assists are up as far as the ball movement. A lot of times I'm not as aggressive as I should be. That's all in flow. My job is to get Ray open and [Rajon] Rondo open [with screens], to get Paul open, to get [Kendrick Perkins] easy shots.

"When Eddie [House] and Tony [Allen] come in, get those guys open. And then when I have opportunity on the block, make plays, whether it's getting somebody an easy bucket or being a force on the block, to bring havoc on defense.

"Right now my defense is totally ahead of my offense. I'm not worried about it. We are winning a lot of games this way."

The Celtics finish this four-game Western trip tonight at Portland. The Blazers haven't played since Saturday and will be playing the fourth game of a five-game homestand. Blazers center Greg Oden sprained his left ankle coming down on the foot of teammate Shavlik Randolph at practice yesterday. X-rays were taken and he will be a game-time decision, according to the Blazers. Guard Brandon Roy has a mild hamstring strain and is a game-time decision, too. He was injured last Saturday against Toronto and didn't practice yesterday . . . Asked about the challenge of finishing the trip strongly, Pierce said, "It's easy to be focused for this last game. Obviously, when you go on a trip, you want to go 4-0. Being that we are behind the 8-ball a little bit, we want to kind of make up the games that we lost. We felt like we could have won the Golden State game and the Laker game. We want to make it up here in the last game of the road trip. We're not one of those teams that pack it in in the last game and go home."