Sports arena name is still up in the air 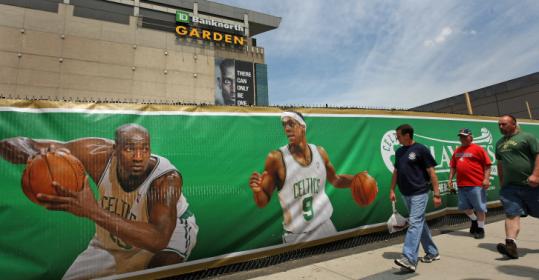 Changing course in the face of a lawsuit, TD Banknorth picked a new new name to use following its merger with of New Jersey - TD Bank.

Previously the combined banks were to be known as TD Commerce Bank. The bank has not decided what name it will put on the Boston sports arena now known as the TD Banknorth Garden, where it owns naming rights. Bank officials said they expect to decide on a name for the arena later this year. Any final name would include the word "Garden."

TD Bank chief executive Bharat Masrani said he switched to the new name for his institution because of a lawsuit brought by Commerce Bank & Trust Co., a 12-branch company in Worcester. In a federal suit earlier this year, it claimed the name "TD Commerce Bank" would confuse customers.

Earlier this year, the Worcester bank won an injunction from a federal judge barring the merged banks from using the name TD Commerce Bank in much of Massachusetts, including Boston and Worcester.

That also will give the bank time to settle on a new name for the Garden, home turf for the Celtics basketball team and the Bruins hockey franchise. TD Banknorth is allowed one name change under the terms of the $6-million-a-year rights pact signed in 2004 with building owner Delaware North Cos.

Executives said TD Bank's marketing will be built around its motto of being "America's Most Convenient Bank." TD Bank is a unit of of Canada.