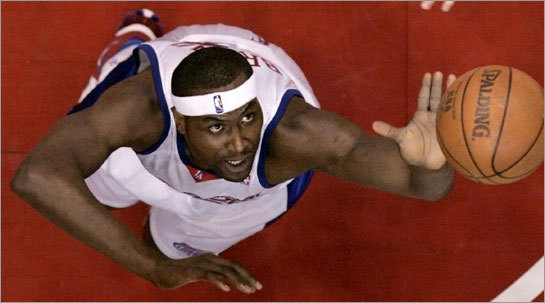 The Celtics won the Atlantic Division by 25 games last season. But with the addition of Elton Brand and Jermaine O'Neal to opposing Atlantic Division teams yesterday, the NBA champions probably won't have it so easy next season.

The Sixers signed two-time All-Star Elton Brand to a five-year deal reportedly worth $82 million yesterday. The Raptors also completed a trade for six-time All-Star Jermaine O'Neal and the draft rights to Nathan Jawai for guard T.J. Ford, center Rasho Nesterovic, forward Maceo Baston and the draft rights to Roy Hibbert. The Celtics, however, didn't make any moves during the first day of free agency.

"Our division has gotten stronger with the addition of Brand and O'Neal," Celtics general manager Danny Ainge wrote in a text message.

Wrote Celtics coach Doc Rivers in a text message: "Not just the Atlantic, the East in general is loading up. As I said last [season], the East was underrated and the best two records came out of the East. Now it's tougher."

Boston's free agents are forward James Posey, guards Eddie House, Sam Cassell and Tony Allen, forward-center P.J. Brown (who is expected to retire), and injured center Scot Pollard (rehabbing from ankle surgery). The Celtics had expressed strong interest in free agent forwards Corey Maggette and James Jones, but they are on their way to Golden State and Miami, respectively. The Celtics are trying to land a backup center and veteran point guard.

"Nothing going on," Ainge said.

The most coveted of the Celtics' free agents is Posey, who played a reserve role last season and is one of the team's leaders. The Cleveland native is also drawing interest from the Cavaliers, Washington, New Orleans, Detroit and the Lakers.

When asked yesterday about Posey and House, agent Mark Bartelstein wrote in a text message: "Nothing new." Bartelstein, however, said he hopes to get Posey signed in "the next day or so," and also said the Celtics are still in the mix.

Allen's agent, Mike Higgins, said the Celtics are still interested in his client, as are other teams. Boston's interest in re-signing Allen could get stronger if Posey goes elsewhere.

"Boston will always remain an option. Tony is not going to close the door," said Higgins in a phone interview.

Meanwhile, the 76ers and Raptors became power teams not only in the Atlantic, but the Eastern Conference.

The 76ers' roster includes Brand, guards Andre Miller and Lou Williams, swingman Andre Iguodala (free agent) center Samuel Dalembert and budding forward Thaddeus Young. Philadelphia pushed the Pistons to six games in the first round of the playoffs. Brand is considered one of the NBA's top power forwards. He has averaged 20.3 points and 10.2 rebounds over nine seasons.

"[The 76ers] were one of the best teams in the second half of the season last year," said Brand at a press conference in Philadelphia. "I watched them in the playoffs against Detroit. I've been following them for a while and I see myself fitting in and doing numerous things on the court, of course, low-post production, rebounding, defense and helping them get to that next level. They made the playoffs without my assistance, so we are looking for bigger and brighter things for sure."

When asked if the 76ers were a power team after adding Brand, general manager Ed Stefanski said: "Now I feel a little tougher and stronger when I got Elton Brand behind me. We played Detroit to a six-game series. We played them very, very hard. We add Elton Brand to a spot that was a big need for us. I'd have to say, yes, we have closed the gap."

"When I got the call from my agent and he told me about the possibility of coming here, it was like a rebirth," said O'Neal at a press conference in Toronto. "Sometimes you lose that love and you need a move or something to get that fire back in you."

The biggest question mark concerning Brand and O'Neal, however, is health. Brand only played the final eight games last season after an Achilles' tendon injury. O'Neal missed 40 games because of lingering pain from a torn ligament in his left knee that was surgically repaired last summer.

"Health-wise, I'm definitely 100 percent," Brand said. "The Achilles' is totally repaired, is strong and the athleticism is there."