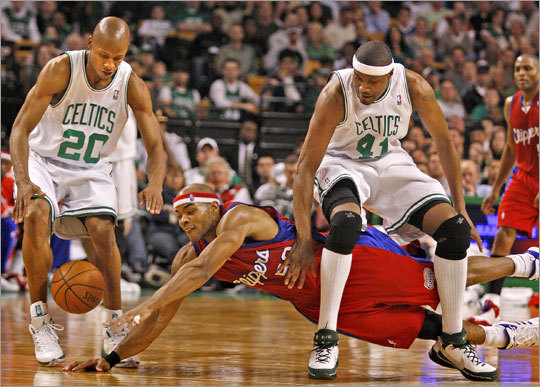 WALTHAM - At 12:01 a.m. yesterday, Celtics general manager Danny Ainge made an expected call to one of his free agents, swingman James Posey. Not long after, Ainge also placed calls to several other free agents throughout the league, including Clippers forward Corey Maggette.

On the first day of free agency in the NBA, the world champion Celtics, according to an NBA source, made contract offers to both Posey and Maggette. Since Boston, at most, has a mid-level exception available (expected to be about $5.8 million), it would seem doubtful they could land both players. Boston is also scheduled have New Orleans center Chris Andersen in for a visit today.

"I called [Posey] and just talked to him and told him how much we wanted him back," Ainge said. "I told his agent and we had a conversation. So we're still having conversations. After James, yeah, I called a lot of guys just to say that we had interest. But I can't discuss names."

Maggette, however, confirmed yesterday he was one of those names.

"I was very surprised they called. They just came off a championship," said Maggette in a phone interview.

Posey averaged 7.4 points and 4.4 rebounds off the bench last season, his first with Boston. He opted out of the second year of his two-year contract Monday to become an unrestricted free agent.

When asked how soon he hopes to lock in Posey, Ainge said, "I really don't know. My life would be a lot easier if I knew the answer to that."

Neither Ainge nor Posey's agent, Mark Bartelstein, would confirm the Celtics made Posey an offer.

Bartelstein said "a lot of people are interested" in his client. An NBA source said the Wizards are "very interested" in Posey, and could make an offer once their situation with marquee free agent Gilbert Arenas is settled. Other NBA sources said Cleveland and possibly the Clippers and New Orleans also could be interested. Posey was not available for comment.

When asked if Posey would visit other teams, Bartelstein said, "Pose has been all over the league. He doesn't need to make any visits. Everyone in the league knows him."

Maggette averaged a team-best 22.1 points and 5.6 rebounds for the Clippers last season. The 6-foot-6-inch, 228-pounder played for Celtics coach Doc Rivers in Orlando during the 1999-2000 season.

"It's a great honor to even hear from them," Maggette said. "Hopefully, I can look at some of the options. That's a good option playing for those guys."

Maggette opted out of the final year of his contract that would have paid $7 million next season. While an NBA source said Maggette's management has asked the Clippers for a contract starting at $11 million next season, he said he could be willing to take a pay cut for Boston.

"It's not always about money," Maggette said. "I've been in the league a long time and I've made a lot of money. I'm tired of losing. I want to get back to the playoffs and win."

The Celtics hope to sign a veteran backup point guard to a one-year, veteran minimum contract, an NBA source said. Candidates include Eddie House, who would return for a second season with Boston, Dallas's Tyronn Lue, Orlando's Keyon Dooling, Miami's Jason Williams, and Chicago's Chris Duhon. Lue, a 10-year veteran, played for Rivers in Orlando and is good friends with Celtics forward Kevin Garnett, but he said he hasn't contacted either since the offer was made to his agent, Andy Miller.

"I just want to play for a winning team," said Lue in a phone interview. "Boston is definitely a winning team. I'm trying to see what the best fit is for me."

The Celtics have had interest in Andersen since he was reinstated by the NBA and the players union March 4 after serving a two-year ban for violating the league's substance abuse policy. The athletic 6-11, 228-pounder returned to his former team, the Hornets, and played in five games.

Andersen, who has also played for the Nuggets, has averaged 5 points, 4.7 rebounds, and 1.3 blocks over his six-year career.

The Celtics also have other free agents in guards Tony Allen and Sam Cassell, forward-center P.J. Brown (who is expected to retire), and center Scot Pollard. Cassell has said he hopes to play one more season with Boston before becoming an assistant coach with the Celtics in 2009-10.

Allen became an unrestricted free agent Monday when the Celtics declined to make him a qualifying offer.

Ainge, however, said Boston could still bring him back. When asked if the addition of draft picks J.R. Giddens and Bill Walker would affect Boston's interest in Allen, Ainge said, "Time will tell. Those guys haven't done anything yet."

"I had a good conversation with Tony and I assured Tony that this doesn't necessarily close the book for him here," Ainge said. "We like Tony. He's just moving forward in his career. If things might not work out with James or other free agents, Tony would be a guy that we'd be interested in returning to the Celtics."