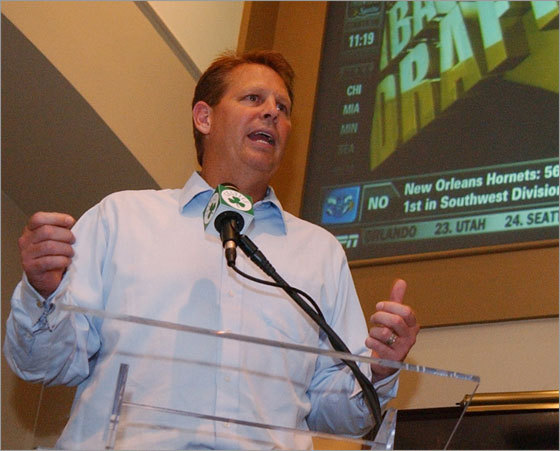 It was truly strange to go back to the Garden last night. It was one week to the day since the big gym was used to launch the championship parade.

The monstrous gold ball and bucket was gone from Causeway Street. There was no metal detector to pass through on your way into the building. The NBA had carted away all the Finals fluff and stuff under the seats in the lower bowl. No acres of media tables and no miles of television cable. The temporary bathrooms were gone.

Even the parquet floor was missing. The Bruins last night used their building for a party for season ticket-holders, so the hockey nets were on the floor and the NBA champions were swept to the side. Danny Ainge manned Draft Central in the Celtics locker room while a few hundred high-roller hoop fans munched on the light fare with Cedric Maxwell and Jo Jo White at Legends.

It was one year ago on draft night that Ainge had us all scratching our heads when he traded the No. 5 pick for Ray Allen. At that hour, Ainge was Danny the Doofus, harpooned from baseline to baseline. We wondered why the Celtics were getting older. We wondered about Allen's double ankle surgery.

Ainge came away with Glen "Big Baby" Davis in the second round and said, "He has big upside."

Yeah, we snickered. Big backside, too.

I ripped Ainge and the owners for lying about holding onto the pick, then wrote, "If they don't get Garnett, if this really is it . . . the Celtics look ridiculous."

Bob Cousy was no fan of the Ainge plan that night. The Cooz said, "I don't have that kind of confidence in aging free agents, especially guys like Garnett or Allen who haven't won anything. I would rather have seen them continue with the youth movement and take the kid from China [Yi Jianlian]."

We were wrong. And Danny was right. He knew what he was doing. He took the bullets and stuck with his plan. And everything unfolded magically in one season.

So, it's all different now. We think of Danny the same way we think of Theo Epstein, Bill Belichick, and Scott Pioli. We trust him to do the right thing. We assume he's smarter than everyone else.

Ainge has made his bones in Boston as a builder of a champion. In a single year, he has emerged as a worthy successor to Red Auerbach.

Red loved Danny when Ainge played for the Green because Ainge was an instigator.

The Kevin Garnett deal is always the one cited because that's the deal that changed everything for Boston, but there was a lot more to it than just trading for the Big Ticket. Garnett only came here because Allen was here, because Pierce wasn't traded. Danny had the pieces to get Garnett because he was smart enough to draft Al Jefferson and Ryan Gomes. It was Ainge who drafted starters Rajon Rondo and Kendrick Perkins. He filled out his bench with the likes of James Posey, Eddie House, Sam Cassell, and P.J. Brown. Plus Big Baby. Oh, and let's not forget Leon Powe, a pretty good pickup at No. 49 in 2006.

"Danny knows the system I love," said coach Doc Rivers. "And he goes out and tries to find the best players to fit that system."

"We never wavered on Danny," said Grousbeck. "We saw what he'd done with medium and low picks. We were sticking with Danny."

Ainge's No. 44 is the only jersey not retired among the famous starting five of 1985-86. That may change.

"I told him if we won a championship he would see his number in the rafters," said Grousbeck. "It was kind of a lighthearted comment at the time, but I would love to see 44 up there."

Ainge stays humble about all of it. Blessed with a wonderful family and great faith, he knows what's important in life and he never succumbed to the fear and loathing that swallowed so many pro sports executives in Boston. He's always known that it's just a game and if you want to have a different opinion, well, that's OK with him. He's confident in his decisions. And he'll admit it when he's wrong. Just don't expect him to think winning basketball games is a life-and-death issue.

So you're going to have to believe him when he tells you he believes in J.R. Giddens, the guard from New Mexico he picked at the end of the first round last night.

In the old days, Red could get Sam Jones, Tom Sanders, or John Havlicek at the end of the first round after winning a championship. The league was smaller then. Now you pick 30th when you win. And you get J.R. Giddens.

"I hope we pick 30th every year," said the new genius.