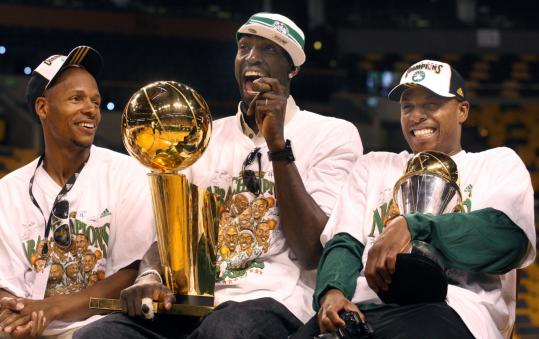 There's Kevin Garnett, a primal scream of a power forward whose relentless intensity borders on mania, yet a sentimental giant who wept before millions after winning the championship. The unflappable Ray Allen, a velvety scorer with a movie star smile that belies a cold-blooded shooting stroke.

And most beloved of all in the firmament of Celtic fandom, captain Paul Pierce, the courageous veteran player who overcame injuries, a near-fatal stabbing, and years of grinding defeats to achieve championship glory and take his place among the all-time Celtic greats.

Among the tens of thousands of fans who celebrated the Celtics' 17th world championship at yesterday's parade, vast numbers proudly wore the green and white jerseys of the supremely talented "Big Three," who stood side by side, setting egos aside, to become champions.

As they gathered near the team's home court to pay homage to their conquering heroes, fans young and old exalted Garnett's unbridled passion and towering defensive presence, and gushed over Allen's sweet jumper and sharp drives.

But it was clearly Pierce, whose fist pumps and cool cigar puffs from his perch on the Duck Tours boat drew deafening cheers, who is closest to their hearts. With him, the small forward who fought through a knee injury to win the Finals MVP, the bond was deeply personal. After watching Pierce give his all for 10 years, his every emotion etched on his face, they felt they almost knew him.

"He left his heart out on the floor, every time," said Tony Andrew, a 46-year-old lifelong fan from Rockport who came of age with the original "Big Three" of Larry Bird, Kevin McHale, and Robert Parish. "All those years of losing, and he never complained, never gave up. We've seen him grow up."

Which of the "Big Three" fans adopted as their favorite defied prediction. Little girls wearing Garnett jerseys were barely tall enough to tug on the seven-footer's shorts. Older men long past their pickup-game days sported Allen's number 20. And fans of all shapes and sizes roared for Pierce as he rolled by, clad in a "The Truth" T-shirt. The nickname was fitting, many said. Pierce was the Celtic constant, an unwavering presence who, when he tossed his sweatband into the crowd at home games, seemed to love the fans as much as they loved him.

"Pierce is my favorite because he's the man," exclaimed Jennifer Lee, a 22-year-old from Revere. "He's been playing with us for 10 years, and he finally got it for us. I love you! I love Paul Pierce."

Others said they admired Pierce for his selfless style, his willingness to sacrifice personal glory for the good of the team. Many identified with Pierce's blend of swagger and steely determination.

"He's right up there with Bird for me," said Eric Siedsma, a 24-year-old from Hartford who drove up yesterday morning for the rally. "Everything that needed to be done, he did."

"He's really intense, especially when he gets points," added Jack Smith, a 12-year-old from Rochester. "But he doesn't get too cocky."

Not that Garnett and Allen lacked their legions. Peter Bellotti, a 20-year-old from Winchester, said Garnett's maniacal focus and determination were unrivaled.

"He's all heart, all pride," he said, pounding his chest just like Garnett. "I've never seen a player so intense. All he does is try his hardest."

To Roberto Jimenez, a 23-year-old from Waltham, Allen seemed like a regular, down-to-earth guy, not a self-centered multimillionaire.

"I think if I saw him on the street, he'd be normal," he said. And David Machlin, who celebrated his 21st birthday Tuesday with the first Celtics title of his lifetime, identified with Allen's understated style.

Others' affections lay at the end of the bench, where everyman Brian Scalabrine typically resides. Toting a sign stating "Should Have Put In Scal," 17-year-old Jeff Dugas grumbled that his favorite underdog didn't see any playing time.

"Up by 40, what could he possibly mess up?" he asked, lifting up his hat to show his red-haired resemblance to Scalabrine. "Honestly. They should let him get in for a minute of the Finals. Make his life."

Some were profoundly torn over the choice, as if picking just one was disloyal.

And others said choosing a favorite ran counter to the all-for-one spirit that made the team great.

"The three of them agreed collectively that this is our team, not a one-man show," said Julie Doran, 29, of Somerville, who was taking loads of pictures for her father, a lifelong fan who had to miss the parade for work. "They all were willing to step aside and not be the superstar."