Coach who felt heat now basks in the glow 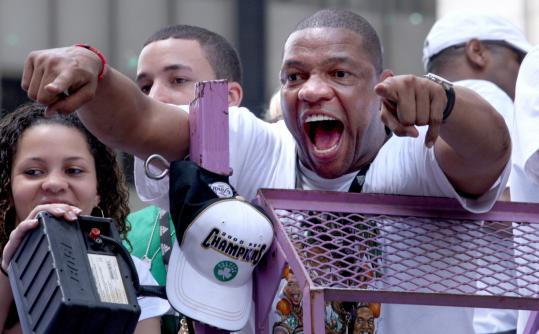 In the dozens-deep throng along the barricades on Boylston Street, nary a sign could be seen with his name. Nor did there appear to be a jersey or shirt in his honor. But when the architect of the Celtics victory rolled past, pumping a fist and screaming in triumph, the crowd roared, crowning their long-sought approval.

If fans questioned whether Glenn "Doc" Rivers had the coaching chops to make it to the finals and square off against the reputed Zen powers of the Lakers' Phil Jackson, few doubted his prowess yesterday.

"In Boston, we expect the best," said Winston Haven, 38, a security guard from Salem who pressed against the barricades near Copley Square. "When you win, we love you; when you lose, we're all over you."

It had been a bumpy road for Rivers, who spent 13 years as a player in the National Basketball Association and four years as head coach of the Orlando Magic before taking the Celtics' top coaching job in 2004. Last year, he took heat, and more than a few calls for his firing, after the Celtics finished with the second worst record in the NBA.

Yesterday, fans were in a far more charitable mood.

"If you don't have superstar players, there's not much you can do as a coach," said T.J. Teal, 18, of Malden, who described himself as a Celtics fan since birth. "Phil Jackson won his rings with Michael Jordan, Shaquille O'Neal, and Kobe Bryant. No coach could have done better than Doc did with the team he had last year."

Not every spectator yesterday had such a rosy view of Rivers, who was named the 1999-2000 NBA Coach of the Year after guiding a lackluster Magic team to a 41-41 record.

Sarah Caughey quibbled about everything from his haircut to his attitude.

"He made it work this season, but he's cocky," griped Caughey, 18, of Mansfield. "He has this gleam in his eye that says he's better than everyone else."

Standing a few inches below the sea of green, 10-year-old Gus Murphy couldn't understand why anyone would have a cross word about Rivers. As he spoke authoritatively about the coach, his 7-year-old sister, Ashley, who made a sign spelling the team name as "Seltics," nodded in agreement.

"He's a great coach - with a lot of spirit," said Gus, who traveled from Quincy with his mother and sister and proudly wore a Rondo jersey, No. 9. "I think he's very determined. He sets a goal, and he's determined to finish it - and he proved that here."

Standing a few heads higher than the rest, his bare chest painted green, 6-foot-7 Chris Bonadies ticked off the reasons why Rivers deserved his share of the adulation: He made good use of his bench; used his offense wisely while shutting down Bryant; and motivated his players.

"I think he's a 21st-century coach, a new school coach," said Bonadies, 19, a lifelong fan who plays center for Curry College in Milton. "He's not a set offensive guy. He can change it up, and he knows how to talk to his players, how to motivate them. He knows when to focus on the small things."

Beverly Mire watched the parade from a giant screen erected in front of Trinity Church. The Malden fan, who described herself as "old enough to have seen Bill Russell play," said Rivers finally showed what he could do this year.

"They should have never doubted him," Mire said. "He finally had the tools to work with. He had a team - and you saw what he did with it."