Greatest of the green 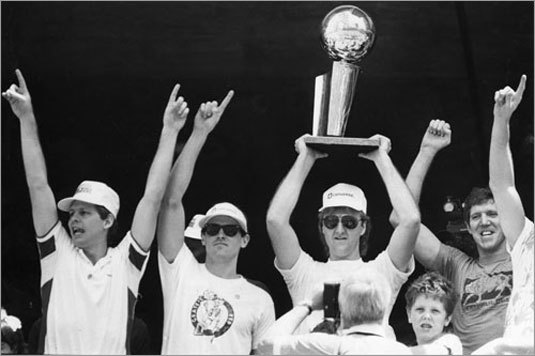 This was a championship for a Lost Generation of Boston Celtics fans.

These are the people who were too young to mourn fallen soldiers Reggie Lewis and Len Bias. These are the people who do not think hard-bodied young women gyrating in the interests of Celtics Green is a sacrilege. These are people who could not imagine entering an arena that did not have a Jumbotron and music and fireworks and who could not possibly imagine that, once upon a time, a portly organist named John Kiley stirred the Boston Garden crowd by playing the "Mexican Hat Dance."

Celtics championship No. 17 belongs to them.

The Celtics began winning champi onships in the Eisenhower Administration with players born either before or during the Great Depression. They continued winning through the Kennedy, Johnson, Nixon and Reagan administrations before hitting a snag following the 1986 championship. Now, after a 22-year wait, they have won a championship under the stewardship of George Bush with players born after man first walked on the moon.

This is a remarkable team, put together in record time by Ainge, a member of the 1984 and 1986 championship teams, and coached by Glenn "Doc" Rivers, a 13-year NBA veteran who had his heart broken on more than one occasion by some of those aforementioned championship teams. It has been built around the considerable talents of three great veterans - captain Paul Pierce, Kevin Garnett, and Ray Allen, and brilliantly augmented by a beguiling combination of experienced, savvy players and eager, youthful ones.

And it is one of the great Celtics teams of all-time. Here's one man's list of the best in Green.

10. 1968-69
Record: 48-34
Playoff record: 12-6
Result: championship
The Last Hurrah for both Russell and the great Sam Jones. After pacing themselves in the regular season, the ancient Celtics (the starting five averaged 32 years of age) knocked off favored Philadelphia, New York, and, finally, star-laden Los Angeles, winning the famous Game 7 in the Fabulous Forum and in so doing keeping celebratory balloons fastened to the ceiling.

9. 1986-87
Record: 59-23
Playoff record: 13-10
Result: Lost in Finals
The Iron Man five of Bird, Kevin McHale, Robert Parish, Dennis Johnson, and Ainge did not have sufficient bench support to get by the mighty Lakers, losing the pivotal Game 4 to the storied Magic Johnson "junior, junior sky hook." No Celtic team ever had more sheer heart.

7. 1984-85
Record: 63-19
Playoff record: 13-8
Result: Lost in Finals
It was the second of Bird's three consecutive MVP award seasons, and the only reason the Celtics did not win the championship was the fact that the Lakers were supremely motivated, a tad deeper, and fueled by a 38-year old legend named Kareem Abdul-Jabbar. The Lakers were 1; the Celtics were 1A.

6. 1962-63
Record: 58-22
Playoff record: 8-5
Result: championship
The incomparable Russell headed a roster than included a record eight Hall of Fame players. It was the last of Cousy's six championships and the first of Havlicek's eight.

5. 1964-65
Record: 62-18
Playoff record: 8-4
Result: championship
At age 30, Russell was at his peak convergence of physical ability, knowledge, and desire. After surviving a scare from the 76ers when it wasn't over until "Havlicek Stole the Ball," they annihilated LA in the Finals.

4. 1983-84
Record: 62-20
Playoff record: 15-8
Result: championship
No better physically than the '84-85 team, this squad simply out-toughed the Lakers to win the championship. The Lakers never allowed this to happen again.

3. 1972-73
Record: 68-14
Playoff record: 7-6
Result: Lost in conference finals
Ah, what might have been. Havlicek injured his shoulder in Game 3 of the conference finals against the Knicks. The Knicks easily dispatched LA in 5; a healthy Celtics team would have swept them.

2. 2007-08
Record: 66-16
Playoff record: 16-10
Result: championship
Won opening game by 20 and never looked back, ending with 39-point humiliation of the Lakers to win the title. It would be very interesting to see if these players could impose their defensive will on their '85-86 counterparts as easily as they did on their '07-08 foes.

1. 1985-86
Record: 67-15
Playoff record: 15-3
Result: Championship
Bird was at his peak. The greatest team ever if you consider no other club has ever brought anything resembling a healthy Bill Walton off the bench. This squad was 50-1 at home, regular season and playoffs combined. This Lost Generation of Celtics fans need no longer slap on their headphones and begin rolling their eyes when the smug followers of champions 1 through 16 begin rhapsodizing about the virtues of their favorite Celtics squads of yore. Their team, No. 17, can compete with any that has ever worn the Green and White.