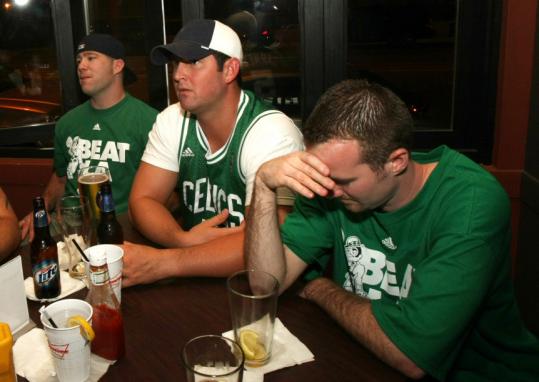 Boston fans eagerly poised to celebrate the Celtics' first championship in more than two decades were denied their long-awaited victory party last night, at least for 48 hours, as the Los Angeles Lakers staved off elimination in the NBA Finals with a hard-fought home win.

Shortly before midnight, crestfallen fans shuffled out of sports bars across the city, where throngs had gathered in hopes of seeing the storied franchise win its record 17th title, and its first in 22 years. While frustrated by the narrow 103-98 defeat, Celtics faithful said they remained confident the team will clinch the title at home tomorrow night. Winning the elusive championship in Boston, they said, would be even sweeter.

"When they come back home, the crowd will get them through it," said Sara Barsch, 27, of South Boston, who grew up attending games during the era of Larry Bird.

Even before the final buzzer, fans were looking forward to Game 6. The Celtics still have home court advantage, they noted.

"I still think this series is a wrap," said Amber Wilmore-Hurley, 29, of Somerville, from outside Fenway Park. "I'm sure we're going to win this one."

With the Celtics one victory away from the championship, countless fans had poured into watering holes, congregated at friends' houses, and stayed up well past their usual bedtime for the chance to witness history last night. Around the TD Banknorth Garden, many establishments were filled to capacity by tip-off, and latecomers had to scramble for a place to watch the game.

There was a concentrated police presence in the area around the Garden, with officers patrolling the streets in small groups, on foot and on bicycle. Police set up a command center outside the North Station parking garage, where police dogs could be heard barking, and drove up and down streets in two-person motorized carts.

With the streets quiet, some police gathered outside of bars to watch the game through the window. Police had instructed bar owners to close their blinds if they had televisions facing windows, so passersby would not congregate.

In the Fenway area, two busloads of police carrying wooden batons arrived at the ballpark shortly before 11 p.m. But fans streamed out of the bars in an orderly fashion, and police reported no incidents.

Police had taken security precautions to avoid problems that have marred some recent Boston victories. In 2004, police fired pepper-pellet guns into a post-Red Sox victory crowd and killed Victoria Snelgrove, a 21-year-old Emerson College student. Earlier that year, after the Patriots won their third Super Bowl, fans turned cars over and started fires throughout the city. James Grabowski, 21, died when a sport utility vehicle plowed through a crowded Symphony Road.

But police said that with many colleges on summer break, they did not expect significant crowd-control problems this time around.

At the Sports Grille Boston near the Garden, fans stared intently at television screens, the ebb and flow of the team's fortunes etched on their faces. They roared at every Celtics basket, and applauded strong defense. They jeered at league MVP Kobe Bryant and his Laker teammates, groaned when LA scored, and screeched at the referees throughout.

Much of the crowd was too young to remember the 1986 title well, and giddy at the prospect of the first Celtics championship in their memory. Proudly wearing his Celtics Starter jacket from seventh grade, Jeremy Sullivan, a 30-year-old from Somerville, could hardly believe his beloved team was on the verge of triumph.

"I've always hoped we'd be here, but I don't know if I would have called it," he said. "I've stuck with this team for the long haul."

At the corner of the bar, Nathaniel Maney, 24, from Waltham, lived and died with every play. His dad was the same way, he said, a die-hard. Maney inherited the obsession but not the championships. But this team was different, he said. Someday, he'd be telling his kids about the 2008 Celtics.

Sitting with a group of 10 friends at the Fours Grille, Harvey and Gail Zarren, a couple in their 60s from Swampscott, were reliving past Celtics glory. As the Celtics staged a furious rally in the second quarter, Gail Zarren jumped out of her seat, arms pumping. At a time-out, she excitedly drum-rolled the table.

At the Corrib Pub in Brighton, John Walsh, 28, who has been going to Celtics games for most of his life, said the team's renaissance, last night's defeat aside, has been inspiring.

"This kind of season, it makes you sad that Red Auerbach couldn't see it," the Brighton man said.

At the Brighton Beer Garden, Emily Sloane, 25, of Sharon found a silver lining in the defeat."I wanted them to win as soon as they can, but I'm more excited they're coming back to Boston," she said.