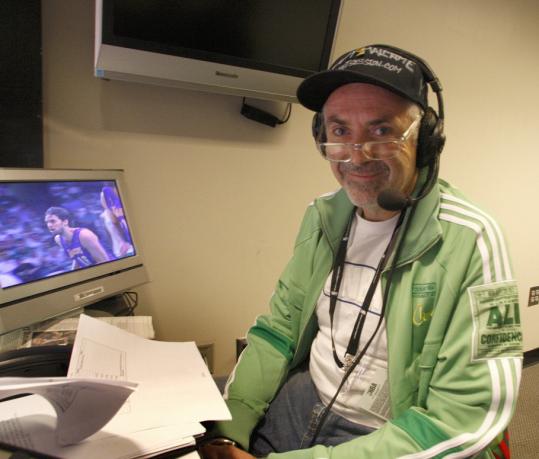 Joaquin Henson is going over his notes with on-air partner Chino Trinidad with Solar Philippines as they get set to air the NBA Finals about 17 minutes before tip-off. This is Trinidad's third time covering the Finals. Henson's eighth. They call Henson the Philippines's Marv Albert. He fancies himself more an analyst a la Hubie Brown.

Henson and Trinidad spent most of their 16-hour flight to Boston scanning stat sheets. They spent the morning rehearsing their standup, which would be sent live to the Philippines. They're waiting for their time on the floor to shoot their pregame show.

"All the insight they need," Trinidad said. "In two minutes."

George Eddy is on the floor now, standing at the end of the parquet in front of the basket closest to the Celtics bench in a lime green Muhammad Ali adidas jacket, because "I figure it'd go over well here."

He's wrapping up are his two minutes of insight.

The conversation with his color man for Canal Plus Network is a blur of French, except for the words "Magic," "Larry Bird," "Kobe Bryant," "Big 3," "Ray Allen," "KG," and "Paul Pierce."

Eddy said learning French was the smartest thing he ever did. He was born to a French mother and lived in Orlando, Fla., before leaving America to play professional basketball in France. He played 15 years before going into television. He's been calling games for 23 years, covering the Finals since 1995.

"I look at it as sitting in a living room with each individual fan watching on TV and talking to him on a one-to-one basis," he said. "That's our job, to bring information that maybe that person doesn't have access to."

Eddy can remember the first time he came to the Finals, when international media was scarce. It was him, a guy from Italy, and a guy from Mexico.

This year he's got a lot more company.

These Finals will reach 205 countries in 46 languages with 280 media members from 35 countries.

The word isn't international. Heidi Ueberroth, the league's president of global marketing partnership and international operations said, "We refer to it internally as global."

"Globalization" is the NBA's new buzzword. Many viewed the league's preseason exhibition tours through Europe and China as dry runs for a possible dive into international expansion. The holdup is ensuring that cities overseas have the arenas to hold NBA games, but that hasn't stopped the league from trying to find ways to interact with fans overseas through merchandising and the Web.

"There is virtually a global teenager that interacts very much the same way, whether they're based in Boston or based in Turin," she said. "They're following the same players and they're using the same products."

But the game still translates best when you see it.

"Television has been the way for us to introduce the NBA to our fans," she said. "A big area of growth right now is looking at all of our fans outside the United States and figuring out how we continue to reach them. Television and media is the first way."

That's how Henson fell in love with basketball.

When he was 10, he would watch NBA games on television, and as soon as the games ended, he'd go to his typewriter and write a game story.

The next day, he'd look for the game story of The Philippine Star, the country's largest newspaper. Then he'd paste the two stories side by side in a scrapbook.

Today he writes a column for the "Star" that runs five days a week, and gets e-mail from all over the country from people who know him by his nickname "The Dean" and people who are just discovering the game.