Maxiell has been a valuable energy source 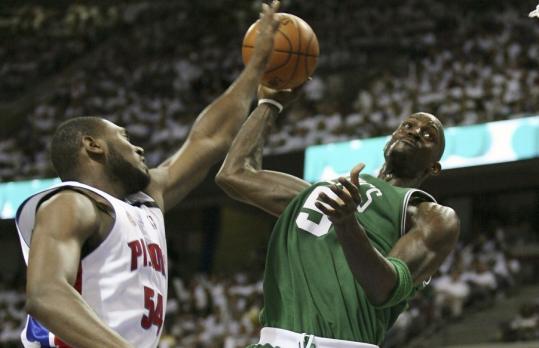 In Game 3 (above), Jason Maxiell proved to be a pest for Kevin Garnett. In Game 4, he was downright menacing as he blocked a Garnett dunk attempt. (Aaron Josefczyk/REUTERS)
Email|Print|Single Page| Text size – + By Michael Vega Globe Staff / May 29, 2008

To a man, the Pistons agree that Jason Maxiell has been great coming off the bench. The third-year power forward from the University of Cincinnati has given his team an immeasurable boost throughout the regular season and playoffs.

"No. 1, he's a player who is a high-, high-, high-energy-type player," said Pistons coach Flip Saunders during yesterday morning's shootaround at Emerson College prior to Game 5 of the Eastern Conference finals.

Funny thing is, Maxiell, at 6 feet 7 inches, 260 pounds, is considered undersized by NBA standards. By any measure, though, he has come up huge for the Pistons.

"He gives us different looks," Saunders said. "Maybe he's a little undersized, but he's a little bit similar to Ben Wallace when Ben Wallace played for us. He's got great energy, he's tenacious as far as getting on the glass, takes charges, and does a lot of the little things.

"I thought that over the course of the season his offense has improved," Saunders added. "His ability to score, as far as being down on the block, definitely improved."

Were it not for those attributes, the Pistons could very well have arrived in Boston for Game 5 staring at a 3-1 deficit in the best-of-seven series.

Instead, the Pistons knotted up the series in Game 4 Monday night, as Maxiell had 14 points, 3 rebounds, and 1 devastating block that denied Kevin Garnett a breakaway dunk.

"Well, I saw him in transition ahead of me and decided not to give him an easy layup," Maxiell said. "I decided it was a perfect time to block a shot."

While the rest of the team may have adopted a no-layup policy, Maxiell seemed to take it a step further by enforcing his no-dunk policy.

"He challenges shots," Prince said. "He doesn't give up anything easy, but more importantly he fights in the paint and really makes them take tough shots. He doesn't like to give up easy baskets."

Which, of course, makes going up against Maxiell a difficult proposition. He's quick and athletic enough to defend and recover on the help side, and has enough offensive skill to score when called upon. "Our opponents' [defensive] mind-set is to focus on Chauncey [Billups], Rip [Hamilton], Tay [Prince]," Maxiell said after Game 4. "So if the shot is there, I knock it down. If not, I go to the boards."

"I think his defensive energy gives our team a lift and, when we're home, gives our crowd a lift," Saunders said. "Jason, what he does, he just plays hard."

Saunders got no arguments there.