'Plan' of Celtics brass to end road woes is in place - Boston, not Cleveland 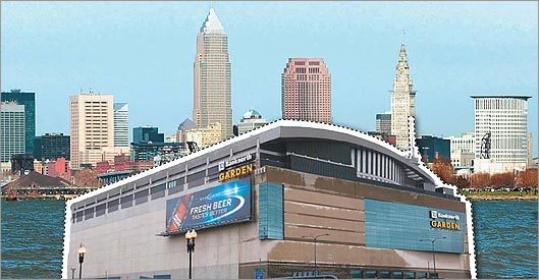 The Celtics hope they’ve located the cause of their problems on the road — Cleveland in this instance — by importing some of the comforts of home. (ASSOCIATED PRESS (CLEVELAND); GETTY IMAGES; PHOTO ILLUSTRATION)
Email|Print|Single Page| Text size – + By Dan Shaughnessy Globe Columnist / May 12, 2008

CLEVELAND - The Celtics' braintrust stayed up past midnight after the Saturday night massacre at the Q. Wyc Grousbeck, Steve Pagliuca, Danny Ainge, Doc Rivers, and Jo Jo White plotted deep into yesterday morning and came up with a plan they think will solve the team's postseason road woes. Home away from home.

It's not reality, of course. It's not even virtual reality. It's the concept of a virtual Boston Garden right here in Cleveland.

It starts in the team hotel. After Saturday night's loss, Celtics brass rigged and wired the team's hotel headquarters to simulate Boston.

This morning, a copy of the Globe will be set outside each player's room. If Kevin Garnett flips on his clock radio, he'll hear Glenn Ordway and friends screaming over each other on "The Big Show." If Paul Pierce clicks on his TV, he'll see Hazel Mae at the NESN sports desk. If Ray Allen orders room service, he'll get a bowl of Legal Seafoods clam chowder.

The Celtics will be transported to the arena on a Duck Boat. The tour guide will tell them that Lake Erie is the Charles River. They'll be told Cleveland's historic Key Tower is actually the Custom House Tower. Jacobs Field? That's Fenway Park. Janet Marie Smith has really made the place over, no?

Once they get to the arena it'll be a Garden take-out party. Wyc and Pags are flying all things Causeway Street to Cleveland.

Start with the uniforms. After Saturday night's blowout, the Celtics petitioned commissioner David Stern to wear white jerseys at every game. Stern, who desperately wants the Celtics to play the Lakers in the NBA Finals, quickly agreed. So the Celtics will don white jersey tops when they dress for tonight's game. The Cavaliers are required to wear red or blue.

When the players look outside their dressing room, they'll see the Celtic Dancers, stretching in the hallway underneath the stands at the Q. They'll see Lucky the Leprechaun assembling his props for the evening's entertainment.

Before the Celtics go out for warmups, Rene Rancourt will sing the anthem for them in the Boston locker room. It'll be a private audience because the Cavaliers won't allow the Bruins/Celtics good-luck singer to work the crowd at the Q.

Francis O'Bryant, a Celtics operations liaison who has been part of the team's locker room since the early 1970s, will help the players with ticket orders and other special requests. Francis never misses a home game. His regal presence will ensure the Celtics they are safe at home.

When they finally enter the arena, some of the Celtics might notice they are not at the Garden, but Wyc and friends are doing everything imaginable to make it feel like a Garden game.

The brass scored a few front-row seats and will sprinkle the arena with Garden regulars like Lenny Clarke, Donnie Wahlberg, Laurence Maroney, and Leonardo DiCaprio. Longtime Celtics season-ticket holder Mike Rotondi will be at courtside.

Coach Willie Maye will be prowling the stands in his sweat suit, microphone in hand. Bob Cousy and Tommy Heinsohn will be working alongside Mike Gorman.

Steve Nazzaro, Mike Swartz, Sherri Geller, Miriam Yorks and the rest of the Garden stat crew and game-night staff will be on hand. More familiar faces.

Wyc is even trying to get the Cavaliers to allow a "Heroes Among Us" presentation during an early timeout. Wyc and Pags will fire Celtics T-shirts into the crowd when Boston is in its huddle.

The Cavaliers have been pretty accommodating about everything, but they drew the line at Gino. Cleveland management won't allow the Celtics to put the "American Bandstand" disco number on the big board. Instead, the Celtics will see video of Gino in their locker room at halftime.

That's it. Management can do no more. The Celtics cannot win a road playoff game, so Wyc Grousbeck and Co. have brought the Boston Garden to Cleveland. Let's see how the fellas respond tonight.