Celtics look for one Tony Allen to emerge 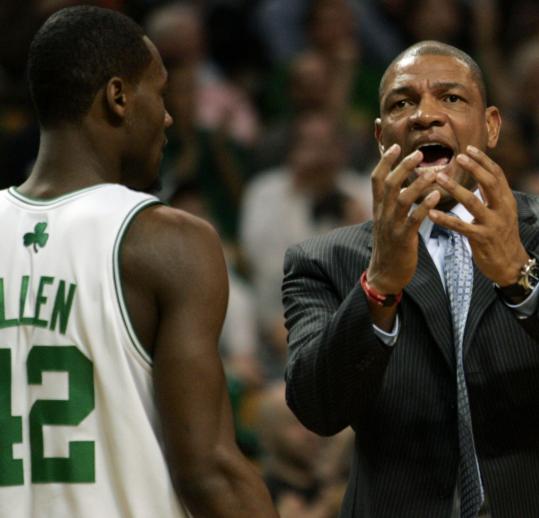 WALTHAM - There have been two Tony Allens for the Celtics this season.

There is the confident one who throws down highlight-reel dunks and showcases a big smile afterward. Then there is the Allen who heard some boos at TD Banknorth Garden Sunday after missing a layup against Miami.

Celtics coach Doc Rivers has said his main goal by the end of the regular season is to get Allen going. The frustrated Allen hopes Rivers gets his wish, too.

"I show flashes of what level I can play," Allen said. "It's just trying to get that consistency."

Allen is averaging 6.2 points and 2.2 rebounds in 18 minutes per game in his role as a reserve, spelling Ray Allen and Paul Pierce. His most productive month was February, when he averaged 9.9 points and 1.1 steals in 19.7 minutes, shot 52.6 percent from the field and 33.3 percent from 3-point range. He scored at least 14 points four times in 11 contests.

In March, however, Allen regressed.

He averaged 3.9 points and 0.6 steals in 17 minutes per game, shot 34.5 percent from the field and missed all nine 3-point attempts in 14 contests. He didn't score in double figures in any game during March. In Sunday's win over Miami, Allen had 2 points on 1-of-7 shooting, 2 assists, and 4 fouls in 19 minutes.

"He's struggling, but he's coming out of it," Rivers said. "He did some good things [against Miami]. Obviously, the layup was a blunder. But that happens. Overall, he's doing some good things."

Rivers, said Allen, is "not trying to get me to score 30 points or nothing like that. He's just trying to get me to take shots when I'm open, drive aggressively, get to the rim, and play solid defense, which is what I'm really here for. Basically, he just wants me to be playing good."

Ray Allen is considered by some one of the top shooters in NBA history, and after yesterday's practice, he worked with Tony Allen on his shooting technique and shared his shooting philosophy.

"There are so many plays where he has the ball and teams are leaving him open and telling him to shoot it," Ray Allen said. "It's confidence for him and using the power he has in his legs to get up into his shot.

"He has to have the confidence to shoot the shot. A lot of his shots are short because when he's shooting the ball he's holding on to it [too long]. I tried to explain what I'm thinking when I'm shooting and what I want."

The main reason for Allen's up-and-down play seems to be his surgically repaired left knee.

Allen missed the last 48 games of the 2006-07 season following the surgery and is still wearing a brace. He expected his knee to be much stronger by now. He said he hyperextended it while elevating for that missed layup against Miami, but will be ready to play tonight against Chicago.

"It sure isn't 100 percent to where I want it to be, but I'm fighting," Allen said. "That's all I can do at this point. Some days it gets better than others.

"I was told that this would happen. Fighting is what I got to do from here on. It's no excuse on anything. I'm just taking it in stride.

"It's frustrating. It's behind me and all I can do is move forward."

Rivers said he believes that some of Allen's issues are mental, since doctors have assured the Celtics that the knee is strong again.

"He's better," Rivers said. "I think he has to [get] better on the floor as far as his play. I don't use his knee [as an excuse] anymore."

While Allen's scoring dipped dramatically last month, Rivers is more concerned about his role as a defensive stopper and his ability to get Pierce and Ray Allen rest. The Celtics have reserve guards who can score in Eddie House and Sam Cassell, but Allen is considered the best defender.

Allen will be an unrestricted free agent this summer, but he said his pending status hasn't affected his play.

Three weeks have passed since Scot Pollard had surgery in Indianapolis on his left ankle that ended his season. Pollard, 33, got off crutches last Wednesday, is now wearing a protective boot, and will be reevaluated in Indianapolis in mid-April.

Pollard, who will be a free agent this summer, said he "absolutely" wants to continue playing in the NBA and hopes to be doing basketball activity again in late June. He also hopes to travel with the Celtics in the playoffs, though he can't now because his ankle swells on flights.

The Celtics yesterday sold out their 2008 playoff strips, which include tickets to all 16 possible home games. A limited amount of individual tickets for Games 1 and 2 of the first round will go on sale April 9.