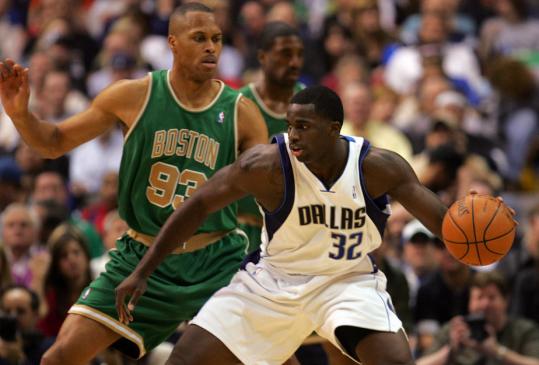 NEW ORLEANS - If it weren't for the allure of playing for the Celtics, P.J. Brown could still be down the road in Slidell watching tonight's game on television instead of playing in it.

Brown was a free agent coveted by the Celtics, Spurs, and Hornets, his former team. The 15-year veteran was comfortable being home with his wife and four kids and not playing. But with Kevin Garnett, Paul Pierce, and Ray Allen on the roster and a real shot at winning a championship, Brown relaced his sneakers and headed to Boston.

Tonight, Brown and the Celtics visit the Hornets in a showdown between two of the NBA's top teams.

"We just begged him," coach Doc Rivers said, noting the Celtics have had interest in Brown since the beginning of the season. "We called him a lot. I thought it came down to us and retiring. I just told him to come and try us out. I said, 'P.J., you don't want to look later and feel like I could have. Just come and try us out and if you don't like it, that's fine. And I think you'll like it.' "

Brown still had numerous teams vying for his services midway through this season and it would have been easy for him to play for New Orleans. The ex-Louisiana Tech star played four years for the Hornets and lived about a half-hour away from New Orleans Arena with his wife, Dee, and their three daughters and one son.

But despite overtures from Hornets owner George Shinn, general manager Jeff Bower, and assistant coach Darrell Walker, Brown declined, since "at this time in my career it wasn't time for me to go back."

"I talked to his agent repeatedly throughout most of this season and made it well known that we'd like him to join us, and we had a spot for him," Bower said.

Added Hornets coach Byron Scott: "It was a personal decision that he has to make, and obviously he felt going there that he has a little bit better chance of winning a championship [in Boston], and I totally understand that."

Brown was still a free agent during All-Star Weekend in New Orleans in mid-February. And over that weekend, he decided to become a Celtic after some aggressive prodding from Pierce and Allen.

Pierce was driving on New Orleans's famed Canal Street Feb. 17 when he saw Brown walking across the street to the Sheraton Hotel. Pierce said he opened his car door right in front of Brown and said, "P.J., we could use you."

Brown said he didn't think Pierce was serious. But the next night at the players' union's annual party, Pierce and Allen spent close to 10 minutes trying to convince Brown to sign with Boston.

Brown signed with the Celtics Feb. 27 for the rest of the season and has said Pierce and Allen's talk was a determining factor - along with a legitimate chance at making a title run. Other than "maybe" San Antonio, Brown said no offer other than Boston's "really moved me."

"This is the No. 1 team in the league and these All-Star guys say, 'We think you can help us. We think you'd be a good fit. We think everything you do can help us out,' " Brown said. "Coming from a player? You hear from general managers, you hear from agents. But when you hear from players, guys that are in the trenches, guys who have busted their tails to make their team where it is up to this point, it really meant a lot."

Brown, 38, had not played since suiting up for Chicago in last year's playoffs. He is averaging 2 points, 3.6 rebounds, and 10.4 minutes in eight games for Boston.

While he is still trying to get the rust off in preparation for the Celtics' postseason run, his kids aren't giving him a break.

"They are excited about [my return]," Brown said. "They are critiquing my game and saying I'm old. They don't give me no slack. They don't care that I've been out nine months and I'm almost 40 years old.

"They say, 'You're supposed to go out there and kick tail.' I hear a little positive, but I hear a lot of negative. They are on me."

Brown said that as soon as the Celtics' private jet arrived in New Orleans yesterday he was going to be on his way to Slidell to see his family. The timing couldn't be better as he will be able to celebrate the birthday of one of his daughters.

Brown is enjoying his time with the Celtics thus far. "No matter what happens," he said, "I feel like I made the right decision."

Whether he returns to action after this season, however, remains to be seen.

"I try to take it day by day," Brown said. "Four weeks ago I didn't even know I would [be a Celtic] . . . I'm just taking it day by day, working on making this team better and doing my part. I'm trying to achieve the ultimate goal. When it's all said and done, then I'll think about it, evaluate it, and go with the family [to decide] once again."

Rivers took a private jet to Raleigh, N.C., to watch his son, Jeremiah, play for Georgetown in the first round of the NCAA Tournament yesterday . . . The Celtics did not practice yesterday . . . Tony Allen is day to day after missing the Dallas game Thursday with a lower-back bruise . . . The Celtics are 4-0 on this five-game road trip and are playing the Hornets for the first time this season.