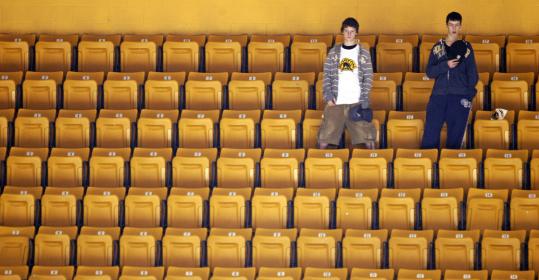 Call it the TD Something Garden.

An otherwise routine name change for a sponsoring bank has again put the name of Boston's well-known sports and entertainment venue up in the air.

Yesterday, TD Banknorth Inc. said it will change its name to TD Commerce Bank following its $8.5 billion purchase of a New Jersey institution, The deal will greatly expand the domestic footprint of Canadian-owned Banknorth and give it a total of 1,100 US branches. Names on TD Banknorth locations will be changed by next year, executives said yesterday.

But undecided is what name it will put on the Garden, the 19,600-seat arena near North Station that serves as the home of the Boston Celtics basketball team, the Boston Bruins hockey franchise, rock concerts, and family shows.

"For sure the 'Garden' will remain there, and what version of 'TD' goes in front of it is the question," said Bharat Masrani, TD Banknorth's chief executive.

Neither Masrani nor John Wentzell, president of the operating company that runs the arena, would give more details about what names are under consideration, but no changes are imminent. Wentzell works for Delaware North Cos. of Buffalo, whose chief executive, Jeremy M. Jacobs, also owns the Bruins. TD Banknorth has the right to change the arena's name once without paying a penalty under the terms of the contract, Wentzell said, standard terms in the industry.

But a small name tweak could prove costly, $1 million or more, just to change signs and graphics inside and outside the building, said Dennis Howard, a professor at the University of Oregon who studies the business of sports.

Also, another name change for the Garden could be a record among major sports facilities, Howard said, even amid a quickening pace of name-swapping that has followed mergers and collapses like the one that led to the end of Field in Houston, a ballpark now known as Minute Maid Park. Another unit of TD Banknorth parent , discount brokerage TD Waterhouse, put its name on an Orlando arena from 1999 to 2006.

Built adjacent to the site of the storied old Boston Garden, the new arena was originally to be known as the Shawmut Center. Before it even opened in 1995 it was renamed the FleetCenter, after Shawmut Corp. was acquired by the bank later known as When Fleet in turn was acquired by in 2004 it gave up naming rights, and TD Banknorth stepped in to pay $6 million a year - triple the rate Fleet was paying.

The current deal for naming rights on the building runs through 2025, and was hailed at the time it was signed for returning the "Garden" moniker to the facility. Masrani said that won't change, calling the term Garden "important, historically."

Jon Hickey, a former Celtics marketing executive now at the Mullen advertising firm in Wenham, said the newly named bank won't likely put off customers with whatever name it decides to use for the arena. But the bigger issue is that it probably will now use up the one name change allowed in its contract, which could diminish the company's value for any would-be acquirer in the future.

"It's one of those things you need to consider when you're doing these multimillion-dollar naming-rights deals, you have to plan for things that you couldn't imagine happening," Hickey said.