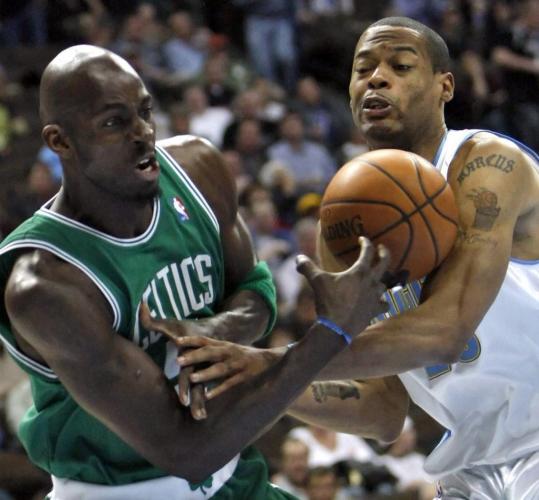 OAKLAND, Calif. - About a month ago, Ray Allen's fiancée pointed out an old picture of two people who played a strong role in opening the door for racial equality in the NBA.

The picture Shannon Williams identified hangs in Allen's office and shows Red Auerbach with his arm around former Celtic Chuck Cooper. Cooper was the first African-American drafted in the NBA, the Celtics selecting him in the second round in 1950. He was one of the first three blacks to play in the NBA 58 years ago, and Auerbach was the Celtics' coach.

In the midst of Black History Month, Allen and some of his Celtics teammates recently reflected on the importance of Cooper.

"Red is hugging him as he is about to put him in a game," Allen said of the picture. "I've had it for about seven years now. I was sitting in my office [in January], and my fiancée was pointing out to me how we had the picture in there. It matches the office and it's coincidental that we have it now that I'm playing for the Celtics."

During the 1950-51 season, Cooper, Knicks forward Nat "Sweetwater" Clifton, and Washington Capitols forward Earl Lloyd were the first blacks to play in the NBA. Lloyd was the first to play in a regular-season game, Cooper played one day later, and Clifton four days after that.

"They were the pioneers," said Celtics coach Doc Rivers. "We needed someone to go first so others would. You needed Jackie Robinson to take the first step [in major league baseball] . . . To me, they were good examples with Jackie. If they had got in the league and that [didn't work out] or they were bad people, it would have made it a lot longer for us to get in.

After being reminded in 1950 that Cooper was black, Celtics owner Walter Brown reportedly said: "I don't care if he's striped, plaid, or polka dot!" The former Duquesne star played four seasons for the Celtics, and later suited up for the Milwaukee and St. Louis Hawks and Fort Wayne Pistons. The Pittsburgh native averaged 6.7 points, 5.9 rebounds, and 1.8 assists in 409 NBA games. While Lloyd is in the Basketball Hall of Fame, Cooper and Clifton have not been enshrined. Cooper died Feb. 5, 1984, at age 57.

Rookie Glen Davis was proud to hear that he wears the same uniform number (11) with the Celtics that Cooper did.

"He's the first black guy drafted in the NBA and I'm wearing his number," Davis said. "I shouldn't be wearing it. It should be retired. You really don't know what you are representing when you pick a number. You never know the history of the number or who wore it. I'll wear it even more proudly."

In addition to drafting Cooper, the Celtics have been involved in a long list of proud moments in African-American history in the league.

Auerbach put the first all-black starting five in NBA history on the floor in 1964. After Auerbach stepped down as coach, he convinced Bill Russell to take over as player-coach, the league's first black head coach, in 1966. Hall of Famer K.C. Jones coached the Celtics to two NBA titles. And Rivers last weekend coached in the All-Star Game.

"A lot of people thought for a long time that the Celtics were a segregated franchise," Allen said. "We've had some of the best black players that have played in the NBA play on the team. I don't know why the stereotype or label has been there on this organization and the city.

"I've seen that largely in Bill Russell's time; he dealt with [racism] while in this uniform, playing for the Celtics. But the franchise itself has always been equal opportunity. They've always treated me with respect and dignity here. Definitely in the city, it's the same."

Executive director of basketball operations Danny Ainge recalled hearing accusations of racism against the franchise and Auerbach, then the team president, while playing for the Celtics in the 1980s.

Even with such standout black players as Robert Parish and Dennis Johnson, the Celtics were often viewed as a pro-white franchise because the roster included white stars Larry Bird, Kevin McHale, Bill Walton, and Ainge. Boston having a reputation for being a racist city back then only added to it. Now 11 of the Celtics' 13 players are African-American.

"When I was playing for the Celtics, some people tried to make us out to be a racist team because we had mostly white players," Ainge said. "I remember those things coming out. But Red Auerbach wasn't a racist. I don't think you could blame Red Auerbach for getting Larry Bird, Kevin McHale, Danny Ainge, and Bill Walton."

"We have to remember our history. That's why Black History Month is so important. You've got to remember those black leaders throughout the history of this country who have fought for equality. You can never forget."

Leon Powe, an Oakland native, was on hand when his son, Leon III, born last month, was baptized here last Sunday. "I invited all my family to the church and everybody came out," said Powe, a former star at Cal. "I baptized my little son. There was about 25-30 family members that went. I was just so happy." Powe said he expected about 50 family members and friends to be on hand for last night's game against the Warriors. He finished with 3 points and two rebounds in 14 minutes . . . Brian Scalabrine missed his second straight game with a right groin injury but hopes to be available tomorrow against the Suns . . . Warriors swingman Stephen Jackson missed the game with a sprained left ankle . . . The Celtics will enjoy a day off today in Phoenix . . . The trade deadline is today at 3 p.m., and Rivers said he would be surprised if the Celtics made a move. Ainge also said he doubted something would happen . . . Warriors coach Don Nelson said swingman Mickael Pietrus still wants to be traded. The Warriors would want a player in return who would bring salary-cap relief next season.