Celtics are in much better place 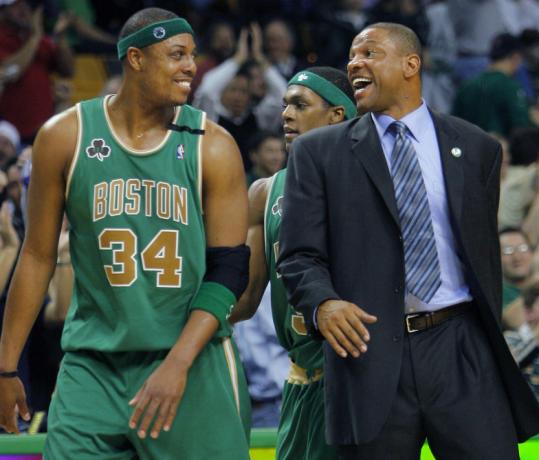 This was a rare happy moment from last season, when Paul Pierce, Doc Rivers, and the Celtics were one of the worst teams. (FILE/JIM DAVIS/Boston Globe)
Email|Print| Text size – + By Marc J. Spears Globe Staff / February 16, 2008

NEW ORLEANS - Paul Pierce was only an assistant to then-teammate Gerald Green in the dunk contest at this time last year. That was the extent of Pierce's involvement in All-Star Weekend while a member of one of the league's worst teams.

Yesterday, he sat proudly as a member of a Celtics team with the league's best record, the six-time All-Star surrounded by media. In just a year, Pierce has gone from being unhappy and wondering about the direction of the franchise to being asked if he envisions his team playing the Lakers in this year's Finals.

Pierce and Doc Rivers, who will coach the Eastern Conference team in tomorrow's All-Star Game, reflected on the Celtics' turnaround.

"It was just tough on me physically and mentally last year," Pierce said. "Just to be back in the All-Star Game with the team doing well, it is just a great turnaround. If somebody would have told me I would have been here with what the team was doing at this time last year, I would have called them a liar."

The Celtics were 13-38 at the break last year, having endured a franchise-record 18-game losing streak. Where they were going was anybody's guess. The hope was the Celtics' record would help them land Greg Oden or Kevin Durant in the next draft. Pierce was frustrated, and during the break Rivers tried to get his mind off things by golfing near his offseason home of Winter Park, Fla.

"I would like to be [golfing] right now going on my 36th round," Rivers joked yesterday. "But this is an honor. You'll take this all day. I just kind of go through [struggles] and live it. But I don't look at it in those [reflective] terms. Maybe when you're away from it all you will look back.

"Things work out. Sometimes they don't. But you've got to keep believing in what you do. I don't look at it in terms of how I was feeling. You just keep working."

Said Pierce: "I was down, man. I was playing but you really aren't motivated because the team wasn't doing good. I was coming off my worst injury of my career. I was really down. That was the low point of my career."

The Celtics' hopes of landing Oden or Durant died when they were awarded the fifth pick in last year's lottery. On draft night, Timberwolves star Kevin Garnett was not interested in being traded to Boston. So the Celtics went to Plan B, acquiring Sonics guard Ray Allen and the draft rights to Glen Davis for Wally Szczerbiak, Delonte West, and the draft rights to Jeff Green.

With the Celtics now having Allen in addition to Pierce, Garnett became intrigued about coming to Boston. And on July 31, the Celtics acquired the 2003-04 MVP for Al Jefferson, Ryan Gomes, Sebastian Telfair, Gerald Green, Theo Ratliff, and two first-round picks.

"You've got to get lucky sometimes," Rivers said. "We were completely unlucky with the ping-pong balls [during the lottery], which made us lucky when you think about it. We needed that to go wrong. We needed Garnett to turn down the original trade. We had a trade for Garnett on draft night that fell through because he rejected it. So we needed that to happen because that allowed us to get Ray.

"Once we got Ray, Kevin looked at us and said, 'Now I want to come.' Kevin knew that [Wolves vice president of basketball operations] Kevin McHale coveted Al Jefferson. So we believed the deal could still happen, and it did."

The Celtics have since lived up to the hype, entering the All-Star break with a 41-9 record. Boston has three All-Stars in Pierce, Allen, and Garnett (injured) for the first time since 1988 (Larry Bird, Robert Parish, and McHale). The Celtics also have their first All-Star coach since Chris Ford in 1991.

"We had a great summer and they're following it up by playing well," Rivers said. "But it was a good summer for us. And every team now believes they can make a trade, and it's true, and they can have the right pieces to change the fortunes of their franchise."

Marc J. Spears can be reached at mspears@globe.com.