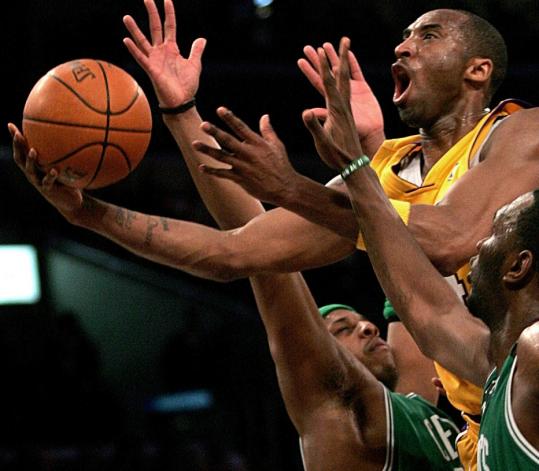 "When you talk about the Lakers, you talk about Kobe [Bryant]," said Paul Pierce. "We just have to control him." The Celtics and Lakers meet tonight. (FILE/Branimir Kvartuc/Associated Press)
Email|Print| Text size – + By Marc J. Spears Globe Staff / November 23, 2007

Depending on where your loyalty lies, you'd either call it the Celtics-Lakers Rivalry or the Lakers-Celtics Rivalry.

No two NBA teams have won more championships than the Celtics and Lakers with 16 and 14, respectively. Historians can vividly recall Red Auerbach enjoying his victory cigar after winning NBA Finals over the Lakers six times in the 1960s. No longtime fan of either franchise can forget the storied battles between Bob Cousy and Jerry West. During the 1980s, there were the bitter games led by the Celtics' Larry Bird and the Lakers' Magic Johnson.

Hey, this rivalry was so intense that a video game was even made with that as a theme.

While the NBA's most storied rivalry has lost some intensity since Bird and Magic unlaced their Converses, the hate between the franchises will never die. Tonight at TD Banknorth Garden, there will be a new chapter added as the Celtics' new star trio faces Kobe Bryant and the Lakers.

"But you grow older and you understand that it's just beautiful basketball. As a kid, you just don't like them. But then, as you get older, you understand the beauty and the rivalry and the sense of appreciation that you have for it."

Said Celtics forward Kevin Garnett: "This is my first of, hopefully, many. If you don't know about the Lakers-Celtics history, then you really don't know basketball. I'm looking forward to it and I'm going to enjoy it. I'm going to embrace it. I'm going to try not to get too hyped about it. I'm very much aware of it. The titles . . . and the endless battles."

Two key ingredients to a great rivalry are great players and great records. Such hasn't been the case for both teams at the same time in recent years.

But today's Celtics enter tonight's game with a star trio of Paul Pierce and newcomers Garnett and Ray Allen. Boston (9-1) also owns the Eastern Conference's best winning percentage at .900. The hot Lakers (7-4) have arguably the NBA's top player in Bryant, who is averaging 26.9 points per game, and a coach, Phil Jackson, who has roamed the sidelines during three Lakers championships.

"Definitely, when you talk about the Lakers, you talk about Kobe," said Pierce, who grew up in Los Angeles as a Lakers fan. "We just have to control him. He's capable of having huge nights. We have to limit the other guys. He's playing well this year. The Lakers are playing well. They're kind of on a roll."

Luckily for the Celtics, the game will be played with Garnett suiting up for Boston instead of the Lakers.

The Lakers were among the teams that made a run at acquiring Garnett from Minnesota during the offseason. An NBA source recently told The Boston Globe that the Lakers dangled the likes of forward Lamar Odom and young, budding center Andrew Bynum for Garnett, but couldn't land a draft pick to sweeten the deal. Instead, the Celtics acquired Garnett July 31 for five players and two draft picks. Jackson found it ironic that Kevin McHale, the Wolves' vice president of basketball operations, traded Garnett to the Celtics.

"Red came out of the grave and got Kevin to make the trade the right way and they're back on top," Jackson said.

Adding to the intrigue of the Lakers' only regular-season visit to Boston is all the drama surrounding Bryant. The nine-time NBA All-Star asked for a trade during the offseason and expressed disappointment with the direction of the franchise as the season started. Lakers owner Jerry Buss has expressed being open to dealing the four-time All-NBA first-team selection.

But when asked recently by reporters in San Antonio if the Lakers' early-season winning has changed his desire to leave, Bryant said: "It's got nothing to do with that. We don't even address it. We let our business people handle the business side of it and one thing I understand now more than ever is that this is a business.

"I wish it was always about basketball, but that's not always the case. I kind of let my business partners take care of that. I'm here to focus on basketball, and that's it."

Tonight's edition of Celtics vs. Lakers or Lakers vs. Celtics will certainly bring excitement back to the storied rivalry. But until both teams play against each other in the Finals again, the rivalry probably won't be quite what it used to be.

"To get back to that, that means that we're playing at a championship level," Bryant said.