Family ties on the schedule 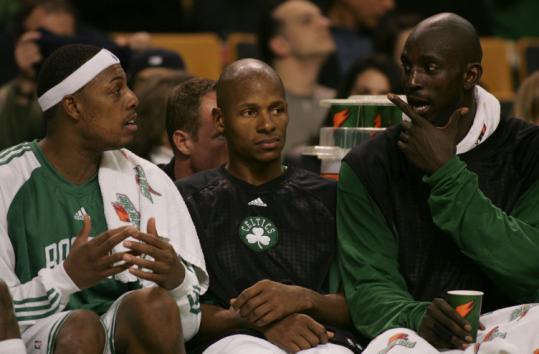 The Celtics are taking today off to celebrate Thanksgiving. Rivers said he was celebrating the holiday with wife, Kris, and his family at his offseason home near Orlando, Fla. Jeremiah Rivers, a Georgetown University basketball player, is expected to attend. Callie, a University of Florida volleyball player who is at a tournament in Long Beach, Calif., is the only one of Rivers's four children who cannot attend.

"It's always a family day," the coach said. "It has to be. It's the best holiday of the year. The other ones, you do them. But I think Thanksgiving is the single best day of the year as far as I'm concerned because it's about giving, saying thanks, and being with your family."

Pierce has been known to cook on Thanksgiving, but he is going to take the day off and just enjoy.

"Thanksgiving, to me, is my favorite holiday," Pierce said. "I don't have to give away no presents or do all that decoration. It's just a time to be around family, have a nice meal, and be thankful for the things you got."

Celtics guard Ray Allen has paid for two suites to accommodate out-of-town guests for dinner at his Wellesley home. For those worried about having help getting the dishes washed, he has a trick to get guests scrubbing.

"I have some great women in my life who have been cooking for a long time and they'd prefer for me to sit down and just relax," Allen said. "I clean up. You throw on some good music and then it becomes contagious. If you got good music on, everybody is in the kitchen wanting to listen to the songs.

"That's the great thing about Thanksgiving. You sat around and ate. Everybody laughed and joked. But when it's cleanup time, you have to put on good music."

Sure, the Celtics are 9-1, 6-0 at TD Banknorth Garden, and are already considered an NBA title contender. But those facts don't impress Warriors outspoken swingman Stephen Jackson.

"They won nine games," Jackson said. "If ya'll want to hype up nine games, so be it. I'm not. They are just another NBA team like everybody else. They'll get praise when they win a championship."

On his impression of Kevin Garnett, Allen, and Pierce, Jackson said, "Nothing. Just another team. The media and NBA hype them up. We don't hype them up. They put their shoes on just like we do. They haven't won a championship yet. That's where you get your props. I got one [with San Antonio]."

Guards aren't usually high on the NBA field goal percentage lists. Entering last night's game, Celtics guard Rajon Rondo was tied for fourth with Orlando center Dwight Howard and was the highest-ranking guard in the NBA at 57.5 percent. That number dropped slightly after a 2-for-6 night, but Rondo is still far ahead of last year's clip of 41.8.

So what has made Rondo's shot better? Hard work on his jumper and wide-open shots, thanks to Pierce, Allen, and Garnett.

"I got to give credit to my teammates," Rondo said. "I'm getting wide-open shots when they're drawing the double teams. I'm just stepping in and shooting with confidence."

Said Rivers: "They're aren't guarding him. He should be [making shots]. And he's making shots. It's what we need."

Celtics forward James Posey missed Tuesday's practice to rest his ailing back, but felt good enough last night to come off the bench and provide 4 points and 4 rebounds in 22 minutes. "A lot of treatment," Posey said of his rehabbing. "A lot of exercising. That's all I can really do." . . . Point guard Troy Hudson was hopeful to join Garnett, a friend and former Timberwolves teammate, with the Celtics before he signed with Golden State. "It was something that my agent was looking at," Hudson said. "KG and I were so close in Minnesota that I could have been someone to have around here." . . . Warriors forwards Al Harrington and Matt Barnes did not play because of personal reasons.