THIS STORY HAS BEEN FORMATTED FOR EASY PRINTING
Celtics 112, Nets 101 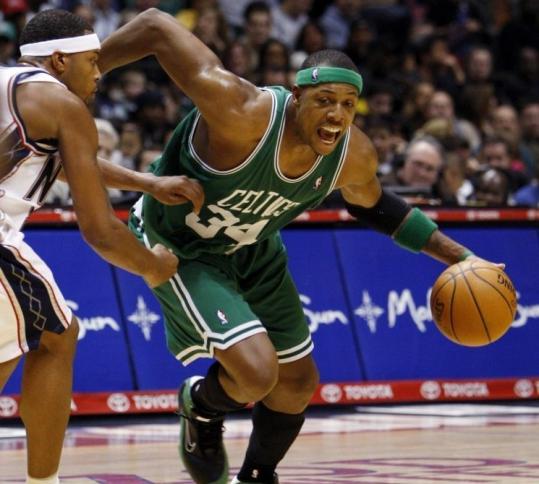 Paul Pierce (28 points) gives Antoine Wright the slip off the dribble on his way to the basket in the third quarter. (RAY STUBBLEBINE/REUTERS)
Email|Print| Text size – + By Marc J. Spears Globe Staff / November 11, 2007

EAST RUTHERFORD, N.J. - Every once in a while an NBA team shows what it's made of by overcoming a major challenge.

Maybe it's a character challenge, or a physical challenge. Or maybe its one of those nights when you are challenged mentally.

"It says a lot about us, man," Pierce said. "I said coming into this game that it would be a test for [us]."

It was a trying day for the Celtics.

Coach Doc Rivers arrived in the locker room 75 minutes before tip-off after attending his father Grady's funeral in Chicago in the morning. Boston was playing without key reserves James Posey (back) and Brian Scalabrine (concussion) and replaced them on the active roster with untested rookies Gabe Pruitt and Brandon Wallace.

Boston also was playing its first back-to-back games of the season after defeating the Hawks at home Friday night.

And, oh yeah, the Nets may be the Celtics' toughest competition in Atlantic Division.

"We didn't know if Doc was going to be here," Pierce said. "We got two rotation players out. And we responded. We came out here and got the job done on a back-to-back [game] on the road. We learn more about ourselves each and every day.

"We understand it is a process. We're going to keep building. It was a good win. A division win."

The mood in the Celtics' locker room seemed somber prior to the game. But once Rivers arrived, the players received a boost of energy.

"It gave me a great boost of confidence," Pierce said. "It was just a tough situation for him. Just to see him there, to be there for the team. He could have easily not came. It was a tough situation. It definitely brought my spirits up when I looked up and I saw him. We didn't expect to have him tonight."

"Everybody perked up like little kids," he said. "It's like their pops or dad coming through the door. It was a cool moment."

With Posey and Scalabrine out, Rivers said following Friday's win that one of his reserves needed to step up. That player last night was rookie forward Glen Davis. The former Louisiana State star had 6 points, 8 rebounds, 2 steals, a blocked shot, and took an offensive charge before fouling out with 10:32 left in the fourth quarter.

"It felt good to be out there with the first squad," Davis said. "Whatever I need to do to help the team. That was my main focus."

New Jersey's oft-injured forward Vince Carter sprained his right ankle after he dunked the basketball with 1:22 left in the third quarter and landed on Pierce's left foot. Carter scored 17 points and didn't return after the injury. The eight-time NBA All-Star's X-rays were negative and it's uncertain when he'll return.

"I want to make sure it's 100 percent and we'll go from there," said Carter, whose Nets play at Boston Wednesday.

After trailing, 27-26, after the first quarter, the Celtics responded to take a 59-52 halftime lead. Garnett nailed a 16-foot turnaround jumper with 1.6 seconds left before halftime.

The Celtics were up 21 points (87-66) after three quarters and seemed en route to an easy win. But the Nets kept playing hard and trimmed the deficit to 8 on a Richard Jefferson free throw with 35.5 seconds left in the game.

Although the Celtics are undefeated, they are far from feeling too good about themselves.

"We see all our flaws every night though," Garnett said.

Said Pierce: "It's early in the season. It's a long grind. We got to see how we respond when we go through those losing streaks for two or three games. Anything can happen. We're still learning about ourselves."