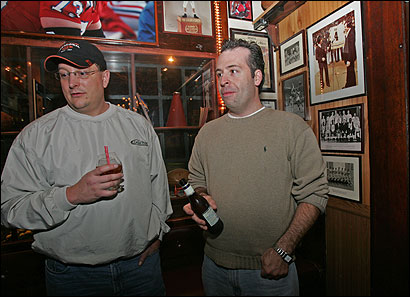 As Dane Degon and Greg Gentile were leaving TD Banknorth Garden after last night's Bruins game, a photo of Celtics legends Larry Bird, Kevin McHale, and Robert Parish sitting together on the bench caught their attention.

Later, as the pair entered The Fours bar on Canal Street, they inspected another photo evoking the team's glory days -- a 1960s championship team seated in the bleachers around Hall of Fame coach Red Auerbach. As they looked at the photo, Degon and Gentile were told that Auerbach had died hours before.

"He was a local legend around here," said Degon, 35, a Charlton resident. The sport "was genuine then," he said.

As word of Auerbach's death made its way through the crowd exiting the Bruins game, others described the coach as "the heart of the Celtics" and a Boston institution.

The coach, who led the Celtics to eight straight National Basketball Association championships -- nine overall, was known for lighting a cigar as his team neared victory. He kept this tradition alive, even after he left the sidelines in 1966 for the front office. He would peer down on games from a box seat in the Garden, often puffing away.

"He was always sitting up there. You always knew he was there at the top of the Garden," said Richard Drucker , 33, of Boston, a longtime Celtics season ticket holder. "I'm shocked right now."

But Auerbach was a commanding sports figure far outside the reaches of Boston, said George Paynter , of Middlesboro, Ky.

"Who else dominated like the Celtics? No matter where else you were in the country, the Celtics were it," said Paynter, as he chatted with friends at the Sports Grille Boston. Locals mourned Auerbach's death, but focused on the good times he had brought to the city.

"We were lucky to have him here, because wherever he was, he'd have done the same," said Marty Crowley, of Hyde Park. "Unmatched would be the word. Unmatched and never to be matched." The news of Auerbach's death will hit hard in Boston, which immortalized him with a life-sized statue in Faneuil Hall's outdoor mall.

"I've watched him since I was probably 10 years old. I followed the Celtics religiously," said Sam Pizzmenti, of Gloucester, as he walked down Friend Street on his way from the Bruins game. "You'll never see another Red."

As Karolyn Lanciault and her husband, Brian, explained Auerbach's significance to the city to their daughter Sabrina last night, they pointed to the same photo in The Fours that had drawn Degon and Gentile's attention. Both recalled attending games with their parents.

"Our generation understood Red and what he brought to this area, and now we've passed that on to our children," Brian Lanciault said. "Red's a good example of a generation passing along a winning approach."