THIS STORY HAS BEEN FORMATTED FOR EASY PRINTING
NBA playoffs preview 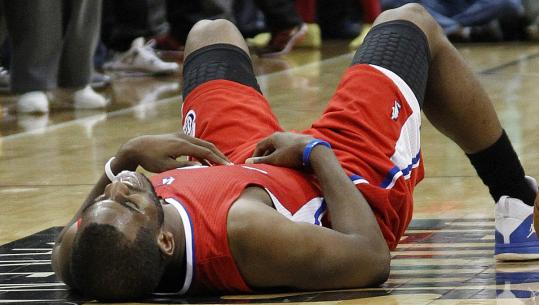 Chris Paul and the Clippers won’t be able to take the Grizzlies lying down in their first-round playoff series. (john bazemore/Associated Press)
By Gary Washburn Globe Staff / April 28, 2012
Text size – +

Christmas was just four months ago, which was when the Knicks rallied to beat the Celtics on the season’s opening day at Madison Square Garden and were suddenly anointed as the heir apparent to win the Atlantic Division.

It didn’t exactly work out that way.

That unpredictability was a staple of this shortened season. Teams such as the Celtics, Mavericks, and Lakers suffered in the early going with conditioning and inconsistency, while athletic teams such as the Bulls, Heat, and Thunder raced to large division leads and coasted to top records.

Yet the Celtics, Lakers, and Spurs eventually gathered themselves and became threats. As a result, this postseason lacks the prohibitive favorite it possessed last year with the Miami Heat. (The Heat and Bulls are again the second and first seeds, respectively, in the Eastern Conference.)

The Celtics are the fourth seed after a sparkling 24-10 after the All-Star Break. The Spurs, despite aging bodies and an unchanging system, gained momentum and won 24 of their last 27. The defending-champion Mavericks picked it up during the midseason but faded down the stretch and are precariously seeded seventh.

The theme is that there is no favorite, making for what could be the most entertaining group of series in years.

The Knicks experienced extreme swings with the emergence of Jeremy Lin and the firing of Mike D’Antoni, yet are now playing their best basketball with Lin out with a knee injury. After sneaking into the 2010-11 postseason, Larry Bird’s Pacers continued to improve and grabbed the third seed with an athletic and versatile roster. The Magic endured a drama-filled season caused by franchise center Dwight Howard, who will not only be unavailable because of back surgery but out of sight because he has been advised by doctors to remain in Los Angeles for three weeks during his recuperation.

The Western Conference is fascinating because the Lakers may have one last gasp with their current group. The Clippers were tabbed as a title contender when they acquired Chris Paul, but dipped to the fifth seed and a matchup with the dark-horse Grizzlies.

Take away perhaps Philadelphia, Orlando, Utah, and Denver, and the remaining 12 teams have at least a sliver of a chance to reach the finals. And with such brutal first-round series for most teams, along with the fatigued generated by the 66-game, four-month season, there could be a record number of upsets.

The NBA survived its labor strife and has presented us with a product that’s frayed and erratic, but still entertaining enough to captivate for the next two months. Get ready.