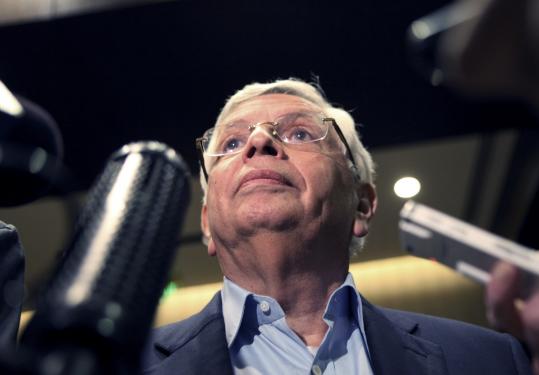 Less than 24 hours remain on the only National Basketball Association countdown clock that matters. With the collective bargaining agreement set to expire at midnight, the league appears headed toward a lockout.

Hundreds of millions of dollars still separate proposals from the owners and players, almost certainly too large a divide to bridge in negotiations scheduled for today in New York City.

“I sure would like to see us make a deal,’’ said NBA commissioner David Stern. “Not making a deal should give everybody apprehension.’’

But neither side is in a concession-making mood, especially the players, who declined to counter the owners’ latest proposal and waited until today to return to the bargaining table. With training camp three months away, negotiations lack a sense of urgency, although the last NBA lockout cost the owners and players 32 games during the 1998-99 season.

The standoff comes down to this: League executives and owners want a new financial system for the NBA with a tougher salary cap, shorter contracts and a greater share of basketball-related income — everything from ticket sales to TV revenue to merchandise. Players want to protect many of the benefits they enjoy under the current deal, such as a soft salary cap, contract lengths that can extend to five or six years and more than half of basketball-related income.

The prospect of a lockout comes at a most inopportune time, with record television ratings and increased attendance building momentum for the NBA. If the NBA entered a lockout, the league would join the National Football League, which is 110 days into the longest work stoppage in its history. NFL negotiations are scheduled to continue today and tomorrow in Minneapolis.

The NBA negotiations are high-stakes for more than just the owners and players. Lockouts lead to lost revenue for the cities that host games and for businesses located near arenas.

Each Celtics home game at the TD Garden results in about $420,000 of outside-the-arena consumer spending for eating and drinking, retail, hotels, transportation and parking, according to the Boston Redevelopment Authority. Add in tickets sales and Garden concessions, which have an economic impact on arena workers and local suppliers, and the number jumps to $1.8 million per game.

“Fans will look at the NBA and say, ‘Haven’t you learned from the NFL?’ ’’ said Kathleen Hessert, founder and CEO of reputation management company Sports Media Challenge, whose clients have included the NBA and NFL, as well as NBA and NFL players. “Fans will be soured on sports if a second league goes this same route. They’ll think, ‘What’s with you guys? You’ve got a storybook life and nothing’s good enough for you, and we’re struggling just to stay above water.’ ’’

“With all the economic problems in this country, no one wants to hear about NFL/NBA lockout,’’ Jared Dudley, Phoenix Suns forward, union representative and former Boston College standout, recently commented via Twitter.

While the NFL appears headed in a positive direction, any optimism about NBA negotiations disappeared last week. Lengthy bargaining sessions produced stinging rhetoric from both sides and a silent statement of solidarity from the players. A group of about 40 players, including Celtics stars Kevin Garnett and Paul Pierce, wore T-shirts that read “STAND’’ to last Friday’s meeting.

The league points to projected losses of about $300 million this season as its strongest argument for changing the NBA’s current business model. NBA deputy commissioner Adam Silver, the league’s lead negotiator, has said the goal of talks is “a system in which all 30 teams can compete for a championship and, if well managed, have the opportunity to make a profit.’’

The league also wants it known 22 of 30 franchises lost money this season, providing owners with further motivation for overhauling the salary cap system and other aspects of NBA business operations.

The players dispute the league losses and contend that recent league proposals asked for too many financial sacrifices. Further, players argue that teams could do more to help themselves, specifically with significant revenue sharing among franchises. That way, the most profitable teams can assist those not profitable.

Currently, the league objects to substantially increased revenue sharing, because it believes the NBA business model should be fixed first. Under a revamped system, they predict, franchises will be more profitable and more competitive.

In its most recent ranking of NBA team values, Forbes magazine placed the New York Knicks at the top of the list with an estimated current value of $655 million with $226 million in revenue. The Los Angeles Lakers and Chicago Bulls followed. The Celtics ranked fourth with a current value of $452 million and $151 million in revenue. Out of 30 teams, 17 on the list had operating income losses.

“One of the differences in the NFL and the NBA is that it’s very clear NFL teams are profitable,’’ said sports economist Andrew Zimbalist. “Not having a season will mean that profits they would have made won’t happen. In the NBA, you see there are losses. So, the owners are less likely to say, ‘Oh, we can’t afford not to have a season.’ Not having a season means they’re not going to have the operating losses they would have had.’’

The owners’ latest proposal sought, according to union estimates, several billion dollars in concessions from the players over a 10-year agreement, as well as a $160 million give-back of money withheld from player paychecks last season. The proposal did guarantee $2 billion per year in salaries, though the players collectively earned $2.17 billion this season.

Regardless of when both leagues resolve their respective labor disputes, teams, owners and players have already suffered costly losses when it comes to their images.

Billionaire owners arguing with millionaire players about the division of profits never sits well with fans.

Hessert, of Sports Media Challenge, advises any comeback strategy be based on enhancing and expanding fan experience on game days and in between. She sees social media as an ideal way for the NFL and NBA to reconnect with fans and better understand what they value.

David Abrutyn, Managing Director of IMG Consulting, whose NFL clients include Eli and Peyton Manning and recent top draft pick Cam Newton, points to the strategy employed by the National Hockey League. After the NHL lost the entire 2004-05 season to a lockout, it focused on regaining the loyalty of its core fans, placing an emphasis on marketing and improving the game.

Comebacks for both leagues will take a long time. At least, everyone involved can agree on that.