THIS STORY HAS BEEN FORMATTED FOR EASY PRINTING
ON BASKETBALL

Playing the inside game

Wondering exactly what James is made of 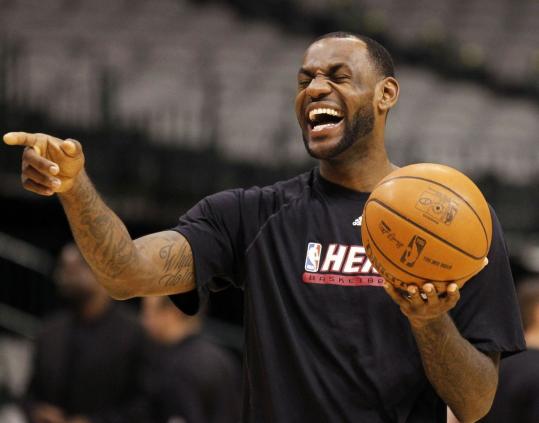 LeBron James is able to laugh during practice yesterday, but he wasn’t so happy after he scored only 8 points in Game 4 of the Finals Tuesday, a contest the Heat lost. (Lucy Nicholson/ Reuters)
By Gary Washburn Globe Staff / June 9, 2011

DALLAS — Has there ever been a more insecure, narcissistic, talented, egotistical, fascinating, and flawed athlete than LeBron James?

His every action sparks a strong opinion. His every game seemingly brings raves or rebukes. He is either the player prepared to assume the “greatest’’ tag from Michael Jordan or considered your classic case of an immensely talented superstar with questionable heart and desire.

Wasn’t James just two weeks ago responding to Scottie Pippen’s comments that he could eclipse Jordan? And now he is the second-best player on the Heat, lacking the fury and passion to be elite, unwilling to put his imprint on games that matter the most.

James was heavily chided after his Game 5 performance against the Celtics in the Eastern Conference finals last May, and when he showed those same passive characteristics Tuesday night in Game 4 of the NBA Finals against the Mavericks, his detractors resurfaced with those same painful yet perhaps accurate allegations.

James is attempting to move on because the Heat remain the favorites to win the NBA title with the final two games of this best-of-seven series in Miami after tonight’s Game 5 at American Airlines Center. He scored a career playoff-low 8 points on 3-for-11 shooting in the 86-83 loss. He failed to score in the fourth quarter, and what’s more, he has scored just 2 points in the final and deciding quarters of Games 2 and 4 — both Heat losses.

James has learned to deal with the media since being a 14-year-old prep phenom and he addressed the horde of reporters yesterday in what became a nationally televised session, similar to those pre-tournament pressers from Tiger Woods.

With Woods on the shelf and having lost his reign as golf’s best player, the sporting public’s scrutiny and attention has shifted to James, who has drawn Woods comparisons for his prowess and dominance — but those parallels end when titles enter the discussion.

James has gone eight years without an NBA title while a 20-something Woods was collecting Masters green jackets like Sunday morning circulars for a 10-year period. James has made his quest for a championship so public that even those who lauded him when he stepped on the floor as an 18-year-old member of the Cavaliers in 2003 now despise him.

He dealt with a full news cycle of criticism well yesterday. He smiled. He was reflective. He promised to do better. But outside confidence in James is wavering, because his breakdowns are never foreshadowed. They come shockingly and suddenly.

James should be past this issue. He has the physical ability to dominate any game in which he plays, so why does he disappear? He doesn’t seem to have answers. After a November home loss to the Celtics, he blamed coach Erik Spoelstra’s rotations and the heavy minutes he was logging.

But Jordan never complained about minutes. He simply played, regardless of sore knees or a high fever or perhaps a night of gambling. So James really has no excuse.

“Absolutely, I criticized myself; I was hard on myself all last night,’’ James said. “Any time I feel like I could have played better and the team loses, that’s what it’s all about. If I have a bad game and we win, I’m hard on myself, but at the end of the day we win the basketball game. When we lose and I don’t play well, and I feel like I could have done one or two more things to help our team win or get over the hump, you’re definitely hard on yourself. That’s just me. That’s just the makeup of who I am.’’

Yet James is such a guarded man, a controlled personality, that it’s difficult to determine whether his regret is actually sincere. He has made scores of mistakes in his career and very rarely has he shown emotion in expressing fault or remorse. He often has turned off supporters with his arrogance, or his refusal to acknowledge that the game he claims to love causes him occasional grief, as it does for every great player.

Losing causes grief. Failure causes grief. But has the public ever seen James in grief? Has he ever considered expressing emotion when that’s the most appropriate reaction? Or will he follow Woods’s robotic path, one that appeared genuine until his insecurities and weaknesses were exposed on the most public of stages.

So we really don’t know if James being contrite was pure or an act. Will he drop 35 on the Mavericks tonight and return with a “See, I told you so’’ attitude after Game 5? Or will he finally admit that this game is humbling, regardless of how athletically gifted you are?

“I haven’t read anything that was written,’’ he said. “I didn’t play well, especially offensively. I know that. I’ve got to do a better job of helping this team win basketball games, especially late, no matter what it is. That’s what my job is. That’s what I’m here for.

“There’s times when you’re out of rhythm, it’s hard to get back into it. But you have to figure out a way to still be an impactful player on both ends of the floor. Those are the things that I pride myself on that hurt me the most. I’ll just be hard on myself and figure out a way to do it better the next game.’’