THIS STORY HAS BEEN FORMATTED FOR EASY PRINTING
Thunder 99, Grizzlies 72 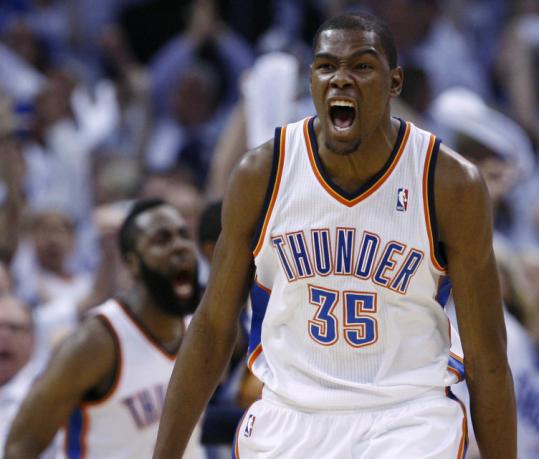 The Thunder lead, 3-2, heading into Game 6 tomorrow night in Memphis. They got there with ease considering what happened two nights earlier.

Marc Gasol had 16 points to lead Memphis, which matched its lowest point total from the regular season and played like it was still drained from Monday’s emotional loss in their building that knocked them out of control in the series.

The Grizzlies shot a season-worst 36 percent and were far enough behind that Durant and Russell Westbrook didn’t even have to play in the fourth quarter.

By the end, Durant was wearing one of the same white Thunder T-shirts as the sellout crowd and was standing on the sideline directing the lineup of reserves that got to play in garbage time.

“We played great defense. Everyone was in tune,’’ Durant said. “It was a group effort.’’

The Grizzlies were a ragged bunch throughout the game after losing the triple-overtime thriller, 133-123, on their home court.

Zach Randolph, who played 56 minutes in Game 4, never was effective. He finished with just 9 points and seven rebounds. Gasol, his partner in the potent frontcourt, did most of his damage during a 6-minute stretch in the third quarter.

Then the Grizzlies fell hopelessly behind.

Oklahoma City’s Nick Collison turned a rebound into a 3-point play. When he converted the free throw, it completed a string of seven straight points by the Thunder to bump the lead to 65-46 late in the quarter.

Memphis didn’t stand a chance of a comeback. Too many missed layups. Too many shots that clanked off the front rim. Too little energy left.