THIS STORY HAS BEEN FORMATTED FOR EASY PRINTING
NBA notebook

Jackson is moving on 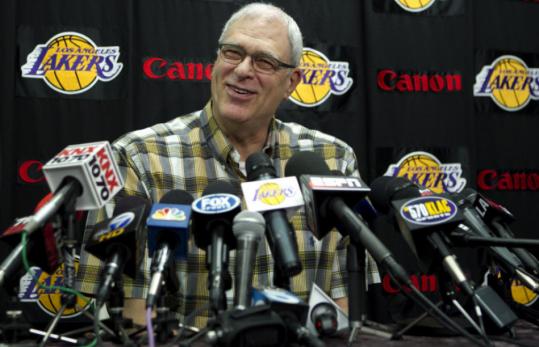 In a farewell news conference, Lakers coach Phil Jackson left only the slightest doubt that he would ever return to an NBA bench. (Jae C. Hong/Associated Press)
Associated Press / May 12, 2011

Phil Jackson imagines himself exploring the southern tropics next winter, or maybe circumnavigating the globe on a motorcycle. The Lakers’ retiring coach doesn’t imagine returning to an NBA bench. At least not right now.

Jackson informally wrapped up his tenure with the team yesterday, three days after the two-time defending champions were swept out of the playoffs by the Mavericks. The Lakers have no plans to replace him imminently, but Jackson left only the slightest doubt he’s done with what’s likely the last chapter of his unmatched career.

The awful ending to the season did nothing to change the 11-time champion coach’s mind about his future. Although he still loves basketball, Jackson wants to get on with the life he imagined as a boy growing up in North Dakota.

“I have no plans to return,’’ the 65-year-old Jackson said in an emotionless news conference at the Lakers’ training complex. “Today, I’m sure. What it’s going to be like in six months, I’m not sure.’’

Jackson’s equivocation could keep the rumor mills turning for several more years, but the coach clearly relishes the prospect of his extended break from the NBA grind.

Jackson said there’s a point in a coach’s life at which “you either move on or stay in it, you never break away from it, and it becomes the rest of your life. I always thought I’d like to do something beyond just the basketball coaching.’’

Jackson made it clear he wishes he had left the Lakers last summer, fresh from the glow of his 11th championship after a Game 7 victory over the Celtics. Instead, he reluctantly returned at the behest of the Buss family and his players to go after an unprecedented fourth three-peat in his coaching career.

But the Lakers never got it together during his curtain call, foundering through long stretches of a 57-win regular season and struggling in the first round of the playoffs before the Mavericks blasted them in four straight games.

“Talent wins, and when you have talent to coach, it makes all the difference in the world,’’ said Jackson, a 1,155-game winner whose career .704 winning percentage is the best in NBA history. “I’ve coached some of the best talent that’s ever played the game.’’

Yet Jackson acknowledges he never really reached his amply talented final team, which appeared exhausted or just plain uninterested in another championship run.

“This team just had an ability to get into a funk and not [get out of it],’’ Jackson said. “I never really had a team like that, that couldn’t make adjustments and learn from mistakes.’’

Kobe Bryant also checked out of the Lakers’ training complex yesterday, defining the season as “a wasted year of my life.’’

Hawks, Bulls confident For a team that knows its season could be one-and-done, the Hawks are still feeling quite confident about their chances in the Eastern Conference semifinals.

Their mantra: Just take it to Game 7.

“If we get this win,’’ Jeff Teague said, referring to tonight against the Bulls, “I think there’s a good chance we’ll get Game 7. I feel like there would be a lot of pressure on them playing at home in Game 7.’’

Of course, there’s that little matter to take care of in Atlanta. Game 6, with no room for error.

For the first time in this postseason, the underdog Hawks are one loss away from going on vacation. They’ve played three competitive games on the road, winning the series opener and putting the Bulls on the ropes Tuesday night.

But led by MVP Derrick Rose and backup Taj Gibson, the top-seeded team in the East pulled away in the fourth quarter for a 95-83 victory and a 3-2 lead in the series.

The Bulls sound confident, too, as well they should. Just one more win will send them to the conference finals for the first time since 1998.

“No matter the situation, down or up, we believe,’’ Carlos Boozer said. “They’re a good team. There aren’t going to be too many times in the playoffs when you blow a team out. In the course of a game there are going to be waves . . . This is two very good teams battling things out.’’

Traylor found dead Robert Traylor, the former NBA and University of Michigan big man nicknamed “Tractor’’ because of his hulking frame, has died. He was 34. Police in San Juan, Puerto Rico, said Traylor was found dead yesterday on the bedroom floor of his oceanfront apartment. Police and Traylor’s team, the Bayamon Cowboys, said he had been missing for a few days and apparently died from a heart attack. Perez said Traylor’s survivors include his wife and two sons . . . Mavericks guard J.J. Barea says he doesn’t hold any animosity toward Lakers center Andrew Bynum after their ugly collision. Bynum elbowed Barea in the chest while the guard was in the air for a layup in Game 4 of their playoff series. He hit the floor hard, Bynum was ejected, and on Tuesday was suspended for the first five games of next season. Barea says he has a bruise on his ribs and another on his left hand. He said yesterday that he received an apologetic message from Bynum that he considers sincere. He didn’t return the call because he didn’t think it was necessary. Barea said: “He just had a big mistake. People have those sometimes. He lost his mind and he fouled me pretty hard. I know he regrets it.’’