’Melo drama, over and out 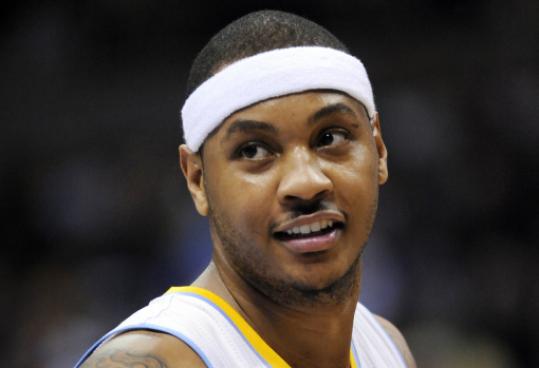 Carmelo Anthony gets to return to his hometown with a $65 million deal. (File/Associated Press)
By Gary Washburn Globe Staff / February 22, 2011

SAN FRANCISCO — The Denver Nuggets drew the blueprint last night for those teams looking to dump disgruntled superstars without risking a destitute existence like that team in Cleveland.

The Nuggets were heavily criticized for not dealing Carmelo Anthony sooner, and those pundits insisted they would never acquire fair market value for the four-time All-Star, who intimated months ago that he had given up on the possibility of competing for an NBA title in Denver and was ready to head east.

Just three days before the trade deadline, the Nuggets, according to the Denver Post, shipped Anthony to the Knicks for four potential cornerstone players, a first-round pick, two second-rounders, and $3 million in cash. And Denver was able to dump the weighty contract of Chauncey Billups, along with Anthony Carter, Renaldo Balkman, and Shelden Williams.

According to an ESPN report citing a league source, the Knicks will send Anthony Randolph and Eddy Curry to Minnesota as part of the deal in exchange for Corey Brewer.

The Nuggets got younger and deeper, and can finally move forward after Anthony wavered all season about his future. The situation was complicated because of the expiring collective bargaining agreement that will almost certainly be altered to reduce overall salaries and maximum contracts.

If Anthony waited until this summer to opt out of his Nuggets contract, he would have risked losing millions of dollars on a neutered deal under the new CBA. So Anthony wanted to get paid, and play for his hometown team in one fell swoop. He will sign that three-year, $65 million extension the Nuggets offered but with the Knicks and join Amar’e Stoudemire to give New York its most talented tandem since Frazier and Monroe.

So how does this affect the Celtics? In the short run, not much. The Knicks traded so many contributing players — Wilson Chandler, Danilo Gallinari, Raymond Felton, Timofey Mozgov — their roster is essentially gutted and it’s unfair to ask Anthony, Billups, and Stoudemire to bond immediately and make the Knicks anything more than perhaps a second-round playoff team.

New York has no center and no legitimate backup at point guard or small forward. The Knicks will look great getting off the bus, but once Carmelo, Amar’e, and Chauncey hit the bench, the reserves could be a second coming of the New York Nationals.

But the Knicks didn’t make this deal for the short term. They now have two players in their prime to sell to a fan base hungry to cheer for a contender. Stoudemire and the younger core — most of which were shipped to Denver — gave the Gotham fans a taste of high-level NBA basketball, but Carmelo, along with another premium free agent and a couple of shrewd draft picks by team president Donnie Walsh, could make the Knicks a power by the middle of the decade, just about the time the Big Three in Boston could be retiring.

So the power shift in the Atlantic Division could head south in coming years, but the Knicks gave up so much in the contract and now have two players making more than $20 million that Walsh won’t have much margin for error in reloading his roster.

Anthony is one of the league’s most gifted offensive players and perhaps he can receive the recognition he deserves on the game’s biggest stage, but he handled this entire process terribly. He used passive-aggressive methods to demand a trade while being almost too sensitive about criticizing Denver. If Anthony was truly unhappy, he should have fully explained his position, not hand the media and fans months of empty, almost insulting denials.

Even at All-Star Weekend in Los Angeles, Anthony said he was still considering signing that extension with the Nuggets. Obviously and understandably, Anthony cares about his legacy in Denver, but his situation was different than that of LeBron James, who announced he was signing with the Heat during a nationally televised spectacle while the Cavaliers learned of his decision precisely 10 minutes before airing.

Let’s see how Anthony handles the increased spotlight and scrutiny of New York fans, who will have no problem blaming Anthony for the gutting of their team if this whole thing doesn’t work out. For now, the Nuggets made out OK, they won’t turn into the Cavaliers or the Raptors.

General manager Masai Ujiri acted proactively in moving an all-time great but at the same time didn’t frivolously trade Anthony for a bunch of unproven parts and salary cap space. Potential is a nine-letter word that can cost general managers their jobs.