Cousins seen by some as relatively risky move 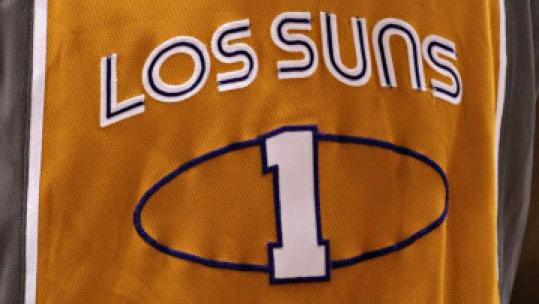 Since he danced and pranced around overmatched fellow high school standouts in the Jordan All-Star Game at Madison Square Garden a year ago, John Wall has been considered the top pick in the 2010 NBA draft.

Not much has changed since then, but John Greig believes Wall is hardly a cinch. The former Sonics forward represents DeMarcus Cousins, an immensely gifted bull of a center who was Wall’s teammate at Kentucky last season and turned in a sparkling freshman year.

Now the two are competing to be the No. 1 pick, and Greig believes the 6-foot-11-inch, 270-pound Cousins presents even more of an upside than Wall. What is causing teams to pause when considering Cousins is the question of maturity, the possibility of him turning into the next Oliver Miller or Stanley Roberts instead of Tim Duncan.

Cousins is the kind of big man that teams crave, and he doesn’t turn 20 until August. With the ability to create space in the paint, a nice shooting touch, and a mean streak, the Alabama native is tempting for teams seeking size.

But the maturity issues are scaring teams, and instead of being talked about at No. 1, Cousins may be competing with Derrick Favors, Wesley Johnson, and Evan Turner for No. 2. Greig asks why.

“There isn’t anybody in the NBA with the same physical characteristics that he has,’’ Greig said. “If ESPN and John Calipari hadn’t had blue pompoms out for Wall all year and they had equally praised both players, who would be No. 1?

“The teams that had done their proper homework, they would take him No. 1.’’

New Jersey will have the most lottery balls and the best chance of landing the top pick. And the Nets have an emerging young center in Brook Lopez, so they would likely take Wall and trade Devin Harris. Minnesota, Sacramento, and Golden State are next in line — as things stand — and each could use a young center, but that’s where Cousins’s reputation may hurt him.

“When you draft a guy that high, you are hoping that you get some level of maturity,’’ said an Eastern Conference scout, “unless the talent outweighs whatever concerns you might have, which is very rare.

“I am not so certain all the teams feel [Cousins’s] talent would outweigh the character and maturity issues.’’

Cousins has displayed a surly court demeanor, even punching a Louisville player in a scramble. Some NBA scouts believe he would have benefited from another year at Kentucky, but Greig said he is a typical 19-year-old.

“How many players are out there that give you the squeaky clean in front of the camera and what’s really going on is something else?’’ Greig said. “I know he’s big and looks like a man amongst boys and he plays with an edge. I understand that.

“He don’t drink. Don’t smoke. Don’t do drugs. He is not a big-time partier. They got him wrong.

“John Wall’s rolling around in a Range Rover right now; good for him. DeMarcus isn’t rolling around in anything. You ask him what he wants to do with his money — ‘Save,’ he said. Anything that’s been said about off the court is plain wrong.’’

With so many not-ready-for-prime-time players in the draft, teams have to be extra cautious when a prospect comes with red flags.

Still, Cousins averaged nearly a double-double and helped lead the youthful Wildcats to the Elite Eight. The success of players such as Al Jefferson and Kendrick Perkins should help him. He is scheduling workouts with interested teams as he splits time between Washington, D.C., and Seattle, and the best thing for Cousins to do is to keep a low profile and impress teams in those workouts.

“The fact that we are even talking about this means that there’s something out there,’’ the Eastern Conference scout said. “The other guys in his range do not have this concern.

“The other issue is his weight. He played — I think if you ask most NBA people — he played an entire season out of shape. He played successfully. He’s going to have to convince teams that not only can he get to a certain weight but that he wants to.

“I don’t think there are any scouts that are debating his talent, but when you start talking about using a pick in the top 10, you have to be a franchise player for a team to say, ‘We know [the issues] are there but we just can’t pass on him.’ ’’

SHINING MOMENT
Suns get their points across
The Suns picked a perfect time to make a political statement when they hosted the Spurs on Cinco de Mayo and wore their orange “Los Suns’’ jerseys. The gesture was in protest of the new Arizona immigration law that makes it a misdemeanor to be in the state without documentation and also allows police to check a person’s status if they have “reasonable suspicion’’ that they are in the United States illegally.

NBA commissioner David Stern said he supported the Suns’ “protest,’’ and it’s about time modern athletes took a page from their forefathers and stood up for something besides higher salaries and guaranteed contracts.

“The recent passage of the new immigration law in Arizona is disappointing and disturbing,’’ said Players Association president Billy Hunter in a statement. “Any attempt to encourage, tolerate, or legalize racial profiling is offensive and incompatible with basic notions of fairness and equal protection. A law that unfairly targets one group is ultimately a threat to all.’’

In addition, Suns managing general partner Robert Sarver told the Arizona Republic that this was not “the right way to handle the immigration problem, No. 1. No. 2, as I read through the bill, it felt to me a little bit like it was mean-spirited, and I personally just don’t agree with it.’’

Once upon a time, Arizona voted against observing the Martin Luther King holiday, and in response the NFL withdrew a Super Bowl from Sun Devil Stadium.

Before that, though, the University of California had qualified for its first bowl game in 11 years, the 1990 Copper Bowl (now the Insight Bowl) in Tucson. Many campus leaders believed the Golden Bears should boycott the game. But a young reporter who now writes this column suggested they play in the game but increase awareness by doing interviews and wearing patches on their uniforms.

The Bears played wearing black MLK armbands to make their point. And they defeated Wyoming, 17-15.

The Suns made their point, too, and their actions did not detract from the primary purpose, as they beat the Spurs, 110-102, in Game 2 of their playoff series.

There are occasions where sports and politics blend well, and this was one of them.

ETC.
Casing Casey for a top job
Mavericks assistant Dwane Casey has interviewed in New Orleans for the Hornets vacant job and has a good chance at returning to head coaching after being removed by Kevin McHale in Minnesota in 2007 after going 20-20 in his second season. Casey has paid his dues as an assistant and deserves another opportunity. “It was a good meeting,’’ said Casey, “and the new owner, Gary Chouest, is going to be good for the league.’’ The Hornets have also talked with Avery Johnson and Celtics assistant Tom Thibodeau. Casey established himself as a coaching candidate during his years as an assistant to George Karl in Seattle, and the results in Minnesota were viewed by many as more a product of mismanagement than a reflection of his coaching. The Clippers and 76ers have also shown interest in Casey.
A lot on Wade’s plate
While the Heat wait for Dwyane Wade to reject the player option in his contract and become a free agent, he is going through a bitter divorce that will take up a chunk of his summer and could affect whether he decides to re-sign with the Heat or joins another club. Wade and his girlfriend, actress Gabrielle Union, are being sued by his estranged wife for emotional distress. Wade is expected to spend most of July in divorce court in Chicago. He is also scheduled to film a movie this summer and participate in USA Basketball camp from July 19-24. Of course, LeBron James’s decision should start the domino effect with major free agents, and that could carry deep into the summer, so those fans who expected quick decisions better get their popcorn ready.
Wiggling his way back
Former Celtic Antoine Walker is gearing up for an NBA comeback and will work out this summer with some of Rick Pitino’s Louisville players to get in shape. Walker has had well-chronicled financial problems and just finished a failed stint with a Puerto Rican team, but he is back in the States and was seen in Miami talking with some former Celtics teammates during their series with the Heat. The three-time All-Star is still only 33, but the best he could hope for is a training camp invitation. He earned $8.85 million in 2008-09 from the Grizzlies, although he never played a game for them.
High pick bottoms out
In one of the more tragic NBA stories in recent memory, former first-round pick Kirk Snyder (Utah, 16th overall in 2004) was sentenced to three years in prison for breaking and entering into his neighbors’ home and attacking them. Snyder’s attorney wanted to plead insanity, but Snyder was deemed competent to stand trial. Snyder played four years in the NBA but got such a poor reputation that he resorted to playing in China in his last professional season. Snyder’s story is the most unfortunate in what is turning out to be a star-crossed 2004 draft class that also includes Robert Swift, J.R. Smith, Shaun Livingston, Rafael Araujo, Luke Jackson, and David Harrison.
Star charts
The NBA awarded the 2012 All-Star Game to Orlando, which has a new arena scheduled to open this fall. It will be the 20th anniversary of the game in which Magic Johnson was named MVP, returning to the NBA after retiring in November 1991 following his HIV diagnosis. By the way, Boston has not hosted an All-Star Game since 1964. Isn’t it about time the city gets into the rotation? Los Angeles will host the game in 2011 for the second time in eight years. According to Stern, the rotation is tight because of a lack of interest in many NBA cities.
Layups
Golden State’s Kelenna Azubuike exercised his $3.3 million option for next season, and look for several other players to exercise theirs and avoid free agency this summer with so many major players looking to change teams. Azubuike missed most of the season with a knee injury . . . The Celtics will be searching for veteran help this summer, and someone to watch for is free agent Damien Wilkins, who could be a tough defender off the bench and would love to play for a winner. Celtics president Danny Ainge has long admired Wilkins’s skills . . . Stern on James’s impending free agent status: “Hopefully he’ll stay. But that’s the way the system is designed, to make it better for him and easier for the team to do it. But [free agency] was so hard-fought by the players and they gave up other things to have that ability.’’

Gary Washburn can be reached at gwashburn@globe.com. Material from interviews, wire services, other beat writers, and league and team sources was used in this report.