Ex-cons part of program to make Boston safe for youths 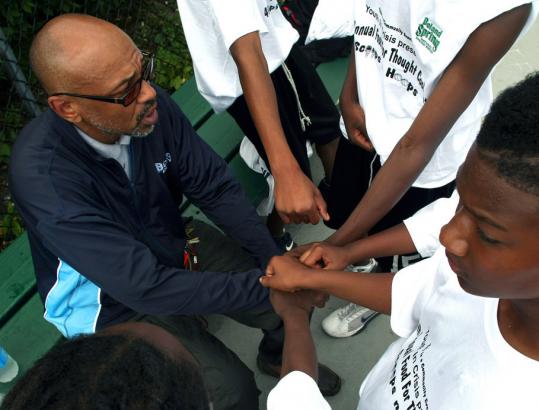 Donovan Walker (left) was hands-on in leading a team of 13-year-olds from the Dudley Square area at a basketball tourney promoting peace and unity. (John Tlumacki/Globe Staff)
By Bob Hohler Globe Staff / July 21, 2009

Some kids call it “the life,’’ a world without pity in which they run with gangs that spread terror on city streets.

Greg Simpson calls it an invitation to an early grave.

Simpson should know. A kid from the Bromley-Heath projects who reached the threshold of his NBA dream before drugs, a gun, and a spree of armed robberies landed him in prison for more than 14 years, he is part of a bold new experiment aimed at conquering the culture of violence and fear that robs many Boston schoolchildren of their futures.

Simpson, 45, who walks the streets of Dorchester’s Grove Hall neighborhood every night looking for trouble to defuse and lives to save, belongs to the inaugural team of StreetSafe Boston outreach workers, a brotherhood of 13 men - nearly half of them ex-offenders - trying to make a difference in five of the city’s most dangerous gang hotspots.

The 13 workers are the soul of a five-year, $20 million initiative that aims to make good on the so-called Boston Miracle that sharply reduced youth violence in the late 1990s, only to fade. StreetSafe Boston is a public and private partnership based in part on the premise that ex-convicts who best know the streets should not be barred from working them because of the state’s criminal record law.

Should the plan succeed, children would no longer need to walk or ride the T to Boston schools and their sports activities in fear.

“I want these kids to know that only two things are going to happen if they go down that route,’’ Simpson said of the gang life. “They’re going to end up in a box or the penitentiary.’’

Many of the new street workers were Boston schoolboy sports stars. Years later, their residual playground fame and street credibility resonate with the kids they are trying to save. They have gained enough trust to take some chances, as they did Saturday at a crime hotspot in Mattapan, bringing together teams of 13-year-olds from five gang-menaced sectors of the city for a basketball tournament aimed at promoting peace and unity.

“These guys know what buttons to push with the kids,’’ Boston Police Superintendent Bruce Holloway said. “They’re helping to keep kids safe. We need a lot more of this.’’

Most of the 13-year-olds were at a crossroads. Soon, they would need to choose between making the best of their athletic and academic potential in the Boston schools, or following their friends, brothers, and in some cases fathers, into the life. Police say gangs are targeting boys as young as 12 to carry drugs and guns.

“This is about building the kind of relationships we want our young folks to have later in life,’’ said Donovan Walker, a StreetSafe worker who coached a team from the Dudley Square area. “Hopefully, when they run into each other again at 16, they’ll remember they knew each other in a good way.’’

Something to do
The Boston schools, whose athletic system is underfunded, ill-equipped, and burdened with kids in crisis, need all the help they can get. Many other sports-related groups provide Boston children vital alternatives to the streets. They range from Boys and Girls Clubs and Pop Warner football to the Charlestown Against Drugs Tennis Club and Play Ball! Foundation, as well as the Boston Centers for Youth and Families.

Cops on the beat also chip in, as Boston Police Officer Agnaldo “Moose’’ Monteiro demonstrated Sunday when he arranged a flag football game at Moakley Park between police and youths from Wendover Street near Uphams Corner, the site of numerous homicides.

“We arrest a lot of the same guys every year, and it doesn’t seem to be that effective at deterring crime,’’ Monteiro said. “I think it works better if you give these kids something to do besides hanging around with the same crowd on the block.’’

Anthony Robinson agreed. A Dorchester native who played basketball at English High School before he became part of the city’s crime problem, Robinson eventually turned his life around and cofounded the Youth in Crisis outreach program. Four years ago, he launched an annual Food for Thought Cookout at Walker Park in Mattapan, and this year he encouraged his fellow StreetSafe workers to help turn the cookout into a crime-prevention Scoops ‘N’ Hoops youth basketball tournament.

“I chose the park because it’s a gang mecca,’’ said Robinson, who is known as “Big Time’’ on the street. “This is what we do. We’re not just on the streets. We’re on the back streets, where the gangs are.’’

A few gang members idled peacefully nearby - a couple even helped Robinson raise a net - as Simpson led his Grove Hall team to the tournament title.

The Grove Hall players were old enough to know their opponents lived on rival turf, some at Orchard Gardens in Roxbury, others at the Cathedral projects in the South End, a few near Bowdoin Street and Geneva Avenue in Dorchester, several from the most violent streets in Mattapan. But there were no visible signs of tension during the six-hour event. No open animosity.

Instead, there were smiles and camaraderie as the StreetSafe team strengthened its bonds with the kids.

Choice, not chance
“This is the best time to catch them, at this age,’’ said Marcus Merritt, who works the South End, from the Villa Victoria and Cathedral developments to the Lenox Street projects, for StreetSafe. “These kids are right underneath their older brothers, who are doing the shooting.’’

No one knows the streets better than Merritt. He grew up in the Cathedral projects. He attended Boston schools, then Cathedral High and Cushing Academy before he went to Mississippi Valley State on a football scholarship. He drew interest from the NFL until he got caught up in the street life and shot a man he described as a drug dealer.

His NFL dream squandered, Merritt continued a life of crime in Miami, where he served a year in jail and began his long journey out of the darkness and ultimately to StreetSafe.

Now, he has little time to spare. In the five weeks since the StreetSafe team hit the streets, Merritt not only has worked the crew’s regular shift (4 p.m. to midnight) but has responded six times after hours to Boston Medical Center to work with friends and families of shooting and stabbing victims. Reaching gang-involved youths in their most vulnerable moments can be crucial to pulling them out of the life, StreetSafe worker Robert A. Lewis said.

Simpson tells them life is about choice, not chance. When he and his StreetSafe partner, Kevin Ryner, recently came upon 20 girls on Intervale Street armed with knives and bats preparing to fight over a minor discourtesy, Simpson suggested the girls had a choice.

Known on the street as “Smooth,’’ Simpson was a gifted point guard who led Madison Park to a state championship in 1982. He bounced from Northeastern University to Mercer Community College in New Jersey before he played for Albany in the Continental Basketball Association, struggling along the way with a cocaine addiction.

In 1985, the Philadelphia 76ers invited him to a tryout. But Simpson never made it, he said, because he was getting high in a Boston crackhouse.

As his addiction worsened, Simpson repeatedly robbed convenience stores at gunpoint - he was known as the “Christy’s Bandit’’ - which contributed to his lengthy prison term.

The StreetSafe team, which is expected to expand to 25 workers, supplements other faith-based outreach groups as well as 30 city-paid street workers and 34 youth workers, who primarily operate from noon to 8 p.m.

“It’s a remarkable band of guys,’’ said David Trueblood, a spokesman for the Boston Foundation, which conceived and launched the program. “They have taken this on as a sacred mission as well as a job.’’

City Councilor Charles C. Yancey, who attended the Mattapan tournament, praised the StreetSafe team but said the city should increase its own force of street workers tenfold to nearly 300. StreetSafe “is trying to do through philanthropy what the city has yet to do,’’ Yancey said. “We have the resources. What’s lacking is the will.’’

The StreetSafe crew has the will.

“This is not political for us,’’ Robinson said. “This is about compassion.’’