No second-guessing Griffin at No. 1 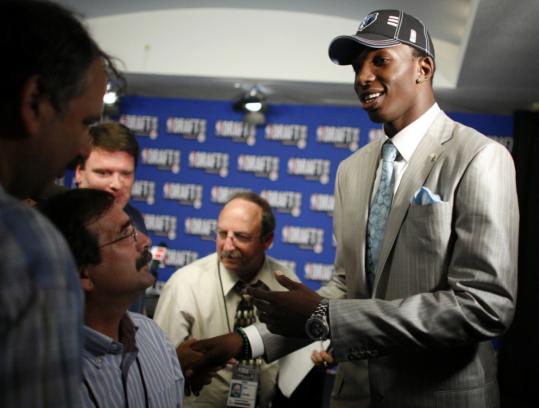 Hasheem Thabeet, the No.2 pick, capped off his busy night as a member of the Grizzlies. (Jason Decrow/Associated Press)
By Brian Mahoney Associated Press / June 26, 2009
Text size – +

NEW YORK - In an NBA draft full of question marks, the Los Angeles Clippers took who was thought to be the only sure thing.

The Clippers selected Blake Griffin with the No. 1 pick last night. Griffin was the consensus college player of the year after leading the nation with 14.4 rebounds per game and averaging 22.7 points last season for Oklahoma. The Clippers said they would take the forward with the top pick just hours after they won the draft lottery last month, and never considered changing their minds.

“The fact is we’re getting an incredible player, incredible person, an impeccable work ethic, and a guy that we plan on having in LA for many years to come,’’ Clippers coach Mike Dunleavy said. “He’s going to be a great, exciting fit for our ball club.’’

The draft lacked the star power of 2007, when Greg Oden and Kevin Durant battled it out for top pick honors, or when Derrick Rose beat out Michael Beasley last year.

There was no debate this time. Dunleavy announced the Clippers’ intentions shortly after his team’s surprising lottery win, and they began a marketing campaign featuring the forward the next day.

The Clippers are hoping Griffin turns out better than their last No. 1 overall pick. They opened the 1998 draft by taking center Michael Olowokandi, who lasted nine uneventful seasons in the NBA.

It was thought Spanish teenager Ricky Rubio might go as high as No. 2. Instead the Grizzlies went with Thabeet, the 7-foot-3-inch native of Tanzania who switched from soccer to basketball just a few years ago and has rapidly developed his defensive skills.

The Minnesota Timberwolves took point guards with the fifth and sixth picks. They snapped up Rubio at No. 5, a pick they acquired from Washington this week, before going for Syracuse’s Jonny Flynn.

Minnesota took its third point guard, Ty Lawson of national champion North Carolina, at No. 18, although he was soon traded to Denver for a future first-round draft pick. The Nuggets, who lacked a first-round pick for the fourth straight year, gave away a pick they acquired from Charlotte last year.

Curry was not the only player with NBA bloodlines to be drafted. Gerald Henderson, whose father played on three championship teams with Boston and Detroit, was selected 12th by Charlotte. Henderson was a third-team All-American at Duke last season as a junior, averaging 16.5 points.

Austin Daye, who left Gonzaga after his sophomore season, was taken 15th by Detroit. His father Darren played five seasons in the NBA, including two with the Celtics.