He feels NBA is within reach

Adrien is hoping to grab attention 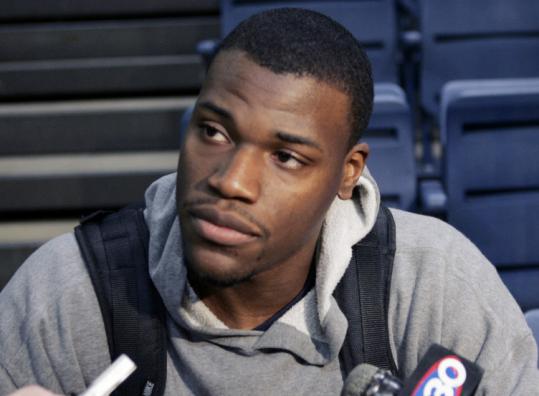 Ex-Brookline High star Jeff Adrien had a solid career at the University of Connecticut after it took a chance on him. Now the bruising power forward is hoping the same thing can happen in the NBA.

While UConn star center Hasheem Thabeet was in the spotlight, Adrien quietly averaged 13.6 points on 50.5 percent shooting from the field, plus 9.9 rebounds and 1.2 blocks as a senior last season. But while Thabeet is projected to be a top-three draft pick, Adrien is projected as a second-rounder in the 40-60 range.

Adrien's official height of 6 feet 6 1/2 inches with shoes is being held against him, but he also owns an impressive 7-2 wingspan and an 8-11 standing reach.

"They always talk about other guys being long," Adrien said. "But you don't grab rebounds with your head, you grab them with your hands. I'm always doing that. I'm bigger than my height.

"I've gotten tired of it, but it's something that has been with me my whole life. People should forget about that.

"Basketball is a sport. I play basketball. Size don't matter. Charles Barkley is a Hall of Famer, but no one ever talked about his height. I got the job done in college. If I was 6-6 and my wingspan was 6-6, then you could talk about it."

Having to prove himself is nothing new. Celtics assistant executive of basketball operations Leo Papile, who coached Adrien with the Boston Amateur Basketball Club, said he was recruited primarily by small Division 1 schools before UConn coach Jim Calhoun became impressed with him and offered a scholarship.

Adrien quickly found his way into the playing rotation with his toughness and ability to play much bigger and stronger than his height. He hopes he can follow in the footsteps of other undersized NBA big men such as Boston's Glen Davis and Leon Powe, ex-Boston College star Craig Smith of the Timberwolves, Houston's Chuck Hayes, and Utah's Paul Millsap.

Adrien worked out for Sacramento Friday, and has worked out for Houston, Miami, and Indiana. He took part in the recent Chicago predraft camp and has 4-5 more workouts on the horizon, according to his adviser, Will Dickerson.

"It's going to depend on his workouts as far as what happens to him," said an Eastern Conference general manager. "He's not one of the top prospects, obviously. But he has a chance."

Although Adrien doesn't have a workout scheduled with Boston, he said he would love the opportunity to aid the Celtics. A spot could open in Boston since Davis and Powe are free agents. The Celtics have the 57th overall pick, in the second round.

"Just give me a chance and good things will happen," said Adrien, who can be followed daily on Twitter at adrien4.

Said Papile, "Jeff is one of my soldiers. I told him that a truly undersized forward at 6-6 is what you are. But he has extraordinary length for his size with a 7-2 wingspan and 8-11 standing reach. He plays bigger than 6-6."

Between team workouts, Adrien has been working out in Los Angeles with the likes of projected No. 1 pick Blake Griffin and Hornets center Hilton Armstrong, a former UConn star. Adrien said that Griffin, another big man whose size is questioned, lives up to all the hype.

"Blake is the No. 1 pick and definitely well-deserving," Adrien said. "I hear people saying that his arms are short. But this guy plays basketball and grabs 14 rebounds with those arms. We go at it every day. It has made me better and helped me in my workouts."

Going to a Jo Jo's

Celtics legend Jo Jo White will soon open three restaurant/sports bars called Jo Jo's that will offer an upscale and entertaining atmosphere for the Celtics and other athletes.

According to White, the first one will open in Maynard in the next two weeks, the second is slated to open in Saugus in July, and the marquee venue is expected to open in downtown Boston in September or October, just before the Celtics begin playing again.

One of the main reasons White says he is opening the clubs is to give pro athletes, celebrities, and other high-profile patrons an upscale, safe, and private place to hang out. There will be public areas at each venue, too.

"We're really excited about everything that has happened so far," said White, 62. "After talking to the [players], they said that after games they had no place to go. When you have no place to unwind, negative things happen. They want to go to a place without the riff-raff and with security.

"All of the sports teams have received packages from us. I talked to athletes about what they're looking for. A lot of these guys say they like to shoot pool, play Wii games. They want a private side with entertainment and still are able to go to the public side."

White said the Jo Jo's clubs will feature individual and corporate memberships and a limousine service. He also hopes to open Jo Jo's in Miami, Orlando, and New York.

"It will give you all you might be looking for in high-end entertainment," said White, who is the Celtics' director of special projects. "A place to go to without media, crowd, and fans. You can unwind without scrutiny."

Still a 'Big Shot' in LA
Retired NBA star Robert Horry said he never received any calls about returning last season, although he did make it tough for teams to find him since he didn't have an agent. When asked if the Celtics showed any interest, the seven-time NBA champion joked that he didn't think Danny Ainge would have reached out, since Horry once threw a towel in Ainge's face when Ainge was coaching the Suns. "If he would have called me, he would have been like, 'Hey, we are not interested,' " said Horry with a laugh. Horry averaged 7 points and 4.8 rebounds during his 16-year career and earned the nickname "Big Shot Bob" for hitting clutch shots in the playoffs. But if the 38-year-old returns to the NBA, he'd prefer it be as an assistant coach. He believes his longevity in the NBA would be a valuable asset. "I helped out a lot of guys when I played," said Horry. "I think I can be an excellent addition to somebody's coaching staff. I think I have a lot of knowledge. I've been through a lot of great eras. Not many players have been through the eras I've been through. I've been through the eras of the Jordans, Magics and Birds, Dominiques, and I was there with the Kobes, LeBrons, and Shaqs and Duncans. There is a crossover. If you can take that and add it to one person, that's a lot of knowledge." Horry was in Los Angeles last week, making appearances for the NBA. It was hard for him to walk around the Center before Game 1 of the Finals without being stopped by a fan or old friend. "It's fun. It's no pressure," said Horry, who played with the Lakers from 1997-2003. "Last time I was here, there was a lot of pressure on me. It feels good to be able to come out, enjoy the people, see familiar faces, say hello and not have to have my mind-set right to get ready for a game."
Shooting down rumors
Despite rumors to the contrary, an NBA executive said there has been "zero" trade discussion regarding Ray Allen, who will be a free agent in 2010, and that such talk is "preposterous." Another NBA executive said, "I'm not really hearing that. But I would expect that kind of rumor. They didn't win without KG [Kevin Garnett], he was hot and cold in the [playoffs], and he's a last-year guy. Upgrade if you can. It would make some type of sense."
Root of the matter
A source close to the Cavaliers said they were quietly rooting for Boston to defeat Orlando in the Eastern Conference semifinals. Why? The Cavs believed Orlando was a bad matchup for them, but they were confident they could defeat the injury-riddled Celtics.
Reality check
NBA commissioner David Stern said the league's salary cap is expected to be "a little bit lower next year, and further decline in revenues would lower the cap even more. That's just the reality of it. But that's not 'the sky is falling,' because we really do believe actually that our business is quite robust. It's just operating in a different environment where 5-10 percent increases are not going to be the norm." Asked how the economy could affect the deep 2010 free agent class - which could include LeBron James, Dwyane Wade, Chris Bosh, Dirk Nowitzki, and Rajon Rondo - Stern said, "I have no idea, and it's not a concern to us."
Free throws
An NBA executive said Knicks president Donnie Walsh is trying to work out a sign-and-trade for forward-center David Lee in a cost-cutting move. The executive also said the Trail Blazers are trying to move up in the draft, and that former Arizona State star James Harden rubbed some people the wrong way after he blew off interviews with teams at the recent predraft camp in Chicago . . . After Blake Griffin, Hasheem Thabeet, and Ricky Rubio, the draft is anybody's guess, with players that could go as high as four or drop as low as 13. However, the Knicks, who have the eighth pick, are high on Davidson guard Stephen Curry, who has been canceling some workouts from teams drafting lower than 10th. An NBA source said to expect a "shuffling of picks" throughout the draft since there are so many teams with multiple selections . . . An NBA source said ex-Celtics forward Antoine Walker is in his best shape in years, as he hopes to return to the NBA after being cut by the Grizzlies last season without playing a game. The source also said veteran forward Tim Thomas, who will be paid $6.4 million next season, has told people close to him that he'd like to be moved to the Celtics. The 6-foot-10-inch, 240-pounder averaged 8.5 points and 3.1 rebounds and shot 41.3 percent from 3-point range with the Clippers, Knicks, and Bulls in 64 games last season. Thomas played with Allen in Milwaukee.