No dice to going elsewhere

McDyess remained loyal to the Pistons 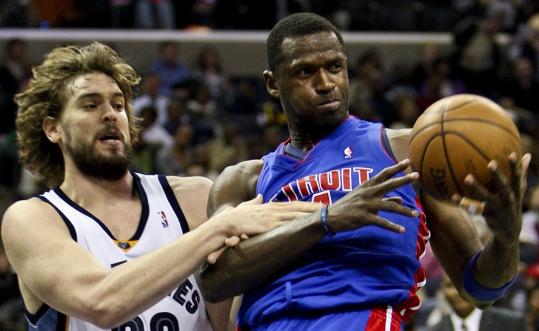 Antonio McDyess (right, fighting for a rebound with the Grizzlies' Marc Gasol) wrestled with his options but ultimately returned to the Pistons, the team that once gave him a chance when few others would. (Lance Murphey/Associated Press)
By Marc J. Spears January 25, 2009
Text size – +

The possibility of playing for the Celtics, Lakers, or Cavaliers surely was tempting. And considering his adoration for one of his former coaches, Larry Brown, the possibility of going to play for the struggling Bobcats wasn't out of the realm of possibility.

But when it came time to determine where he should go, Antonio McDyess said loyalty was the main reason he returned to Detroit, as the Pistons were one of the few teams that offered him a contract (four years, $23 million) five years ago, when most had given up on him after he suffered knee injuries.

"After I got injured, my name wasn't said or mentioned," said McDyess. "[Pistons president of basketball operations] Joe [Dumars] gave me an opportunity to revamp my career. My career was at the bottom and this man offered me a contract at the midlevel exception even though I had done nothing for two years.

"Boston and Cleveland showed interest. [Celtics president] Danny Ainge was there. There will always be a bond with me and [those teams] and Detroit. But I was at the bottom and [the Pistons] offered me this? I owed them. If they wanted me back, I'm back."

McDyess arrived in Detroit for the 2004-05 season, after the Pistons won the 2004 championship. The Pistons haven't won an NBA title since, despite being in the Eastern Conference finals each year, and only returned to the NBA Finals in 2005.

McDyess, guard Chauncey Billups, and center Cheikh Samb were sent to Denver by the Pistons Nov. 3 in exchange for guard Allen Iverson. After two previous stints with the Nuggets, the 34-year-old McDyess had no interest in returning to Denver and asked for a buyout of the nearly $15 million remaining on his contract. The Nuggets obliged Nov. 12, paying McDyess $3.2 million this season and $2.8 million next season. While the Nuggets saved millions, keeping McDyess might have made them a title contender.

While nearly 20 teams inquired about his services, McDyess said he was only seriously interested in Boston, the Lakers, Cleveland, Charlotte, and Detroit. McDyess said he received calls from Ainge, who coached him in Phoenix, and Sam Cassell. While the Celtics, Lakers, and Cavaliers are considered the three front-runners to win the NBA championship, McDyess didn't want to "chase a ring," and has no regrets returning to the inconsistent Pistons. The Celtics play the Pistons for the first time since McDyess's return Friday in Detroit.

"I have no regrets," said McDyess, who re-signed with the Pistons Dec. 9. "Just by getting to the NBA I accomplished more than enough for me. I've played on good teams. I've had great teammates. I can free my mind without a championship. It could have been better, it could have been worse. I didn't want to feel like I was chasing a ring.

There were reports out of Detroit that McDyess didn't want to come to Boston because of a near fight with Kevin Garnett during a game two years ago when Garnett was playing for the Timberwolves. McDyess scoffed at that notion.

"That's far from the case," McDyess said. "That's squashed. Everything that happened was basketball-related and has been squashed. I love KG as a player and a person. Why wouldn't I go there to play with him? He's the best power forward in the game. A Hall of Famer. When things happened two years ago, it was all about basketball. You don't take that home with you."

McDyess is being paid $600,532 by the Pistons for the remainder of this season, and will be an unrestricted free agent this summer. While the 6-foot-9-inch, 245-pounder is expected to re-sign with Detroit, he acknowledged he would listen if the Celtics showed interest.

Expect the debates to be as strong as ever Thursday when the All-Star reserves are announced. One thing to keep an eye on is whether the Suns, who will host the game Feb. 15, get three All-Stars despite having a record that wouldn't get them into the playoffs.

Suns center Shaquille O'Neal and guard Steve Nash are candidates to be named as reserves, but are far from locks. The conference head coaches select the reserves.

"We probably could [get three]," Stoudemire said. "I think we can. Shaq, Steve, and myself, we are all All-Stars in our own minds. It's up to the coaching staff to vote us on."

O'Neal's strong play since December will aid his chances of being named over Minnesota's Al Jefferson, Utah's Mehmet Okur, and Denver's Nene. Nash has been an All-Star every year since 2002. The two-time MVP is averaging 13.9 points and 9.1 assists - his lowest scoring average since 1999-2000 and lowest assist average since 2003-04.

"Steve and Shaq is a given," said Stoudemire. "Two vets. Two perennial All-Stars. Two MVPs. That's a no-brainer if you ask me."

Talking the talk
As the Feb. 19 deadline approaches, two NBA executives said numerous teams are seriously considering making trades to benefit the playoff push or aid their future and/or pocketbooks.

While Toronto forward Jermaine O'Neal and Miami forward Shawn Marion have been mentioned in the hottest rumors and could, in fact, be traded for each other, there are several other intriguing names being tossed around. Keep an eye on Toronto's Anthony Parker and Joey Graham, Minnesota's Mike Miller, Oklahoma City's Joe Smith and Chris Wilcox, Chicago's Larry Hughes and Andres Nocioni, Cleveland's Wally Szczerbiak, Dallas's Jerry Stackhouse, New Jersey's Bobby Simmons, and Washington's Etan Thomas.

"A lot of people are trying to make trades hoping to get an extra boost," one executive said.

Said the other executive, "Teams are looking to save money, get a good young prospect, and get draft picks."

Despite recently landing center Johan Petro from the Thunder, the Nuggets made that move primarily to get under the luxury tax and are in the market for another big man. Regardless of whether they acquire one, the Nuggets will likely return to luxury tax territory when guard J.R. Smith reaches contract incentives.

One of the executives said the Bulls are in "shopping mode" to lower their payroll. Also, a proposed Hughes-for-Simmons deal seems to have little life.

Local interest
An NBA scout said New Englanders who are being evaluated as prospects for the next two drafts include Boston College's Tyrese Rice and Rakim Sanders, Northeastern's Matt Janning, UMass's Chris Lowe, Tony Gaffney, and Ricky Harris, and UConn's Hasheem Thabeet, Jeff Adrien, Jerome Dyson, and A.J. Price. The scout said Thabeet and Price are the only ones with first-round potential.

While a lot of college freshmen have entered the NBA draft in recent years, the 2009 draft is starting to be viewed as strong with upperclassmen. Several upperclassmen, including Thabeet, Davidson's Stephen Curry, Louisville's Earl Clark, North Carolina's Wayne Ellington and Ty Lawson, and Arizona's Chase Budinger, took their names out of the draft last year in large part because of the number of freshman prospects.

Campaign trail
The Timberwolves tried to pump up the All-Star campaign of center Al Jefferson recently by sending to all Western Conference coaches a package entitled "Big Al's Road Trip: Navigating his way to Phoenix." The package includes a GPS called "Model 25, the All-Star edition," which plays a Jefferson highlight video and includes statistics and a road map from Minneapolis to Phoenix. Jefferson is averaging 22.2 points, 10.7 rebounds, and 1.6 blocks for the 14-27 Timberwolves.
RSVPs in NBA
Nuggets center Nene's fellow Brazilians in the NBA are trying to figure out if they will attend his wedding Feb. 14 in Denver. Suns guard Leandro Barbosa has a conflict with All-Star weekend being in Phoenix at the same time, but he hopes to be at the nuptials. Cleveland forward Anderson Varejao is also hoping to iron out the logistics in order to attend. Nene is marrying ex-Colorado State volleyball player Lauren Prothe, whose younger sister, Ashley, is engaged to 76ers forward Jason Smith . . . Ex-Lakers guard Coby Karl, the son of Nuggets coach George Karl, faced a dilemma recently, deciding between a commitment to sign a contract with DKV Joventut in Spain or waiting for an offer from the Cavaliers after Delonte West was injured. By the time Cleveland was comfortable offering two 10-day contracts, Karl opted to leave Boise in the D-League for DKV Joventut, where he will be playing with heralded prospect Ricky Rubio . . . Paul Pierce won't be able to defend his title at the star-studded Zo & Magic's 8-Ball Challenge in Phoenix since the Celtics play in Dallas the night of the event, Feb. 12. Pierce won the title in New Orleans last year, and in 2005. While the challenge is tentatively scheduled to be held at Arizona Wing, a representative from Alonzo Mourning Charities said the event is up in the air. Instead of the pool tournament, Magic Johnson is expected to join forces with ESPN to host a bowling tournament that night, highlighted by Hornets All-Star guard Chris Paul, an avid bowler, and rapper Ludacris . . . The injury-plagued Nets activated former BC forward Sean Williams from Colorado of the D-League. In eight games with Colorado, Williams averaged 9.8 points, 7.5 rebounds, and 3.9 blocks in 25.9 minutes per game and was ejected twice.