In Dallas, Green grows into the job 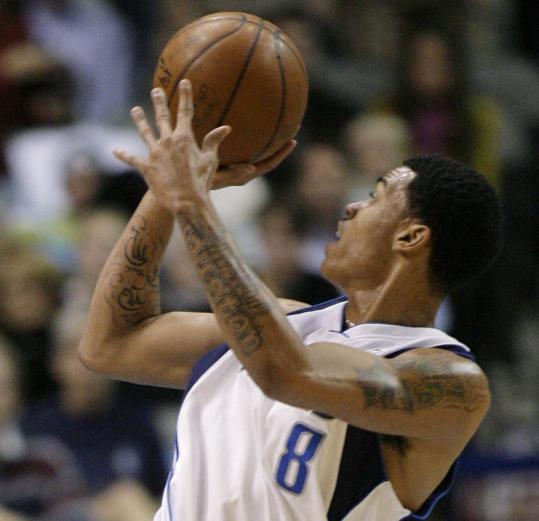 A very humbled Gerald Green wouldn't go as far as to say he'd still be with the Celtics. But if he knew then what he knows now, things might have been different in Boston.

"This is my fourth year in the league, and I know a lot more about the game now," said Green, now with the Mavericks. "These last two years, I've been through it all.

The Celtics drafted the All-American with the 18th overall pick in the 2005 draft when he was just 19 and coming out of high school. The 6-foot-8-inch, 205-pound forward didn't have a strong work ethic and was immature. His highlight was winning the 2007 Slam Dunk contest.

Green was a throw-in in the blockbuster trade that brought Kevin Garnett to the Celtics last year from Minnesota. While ex-Celtics Al Jefferson, Ryan Gomes, and Sebastian Telfair flourished in Minnesota, Green rode the pine. He asked for a trade and was dealt to Houston Feb. 21.

"I went from playing in 81 games my second season to really not playing at all," Green said.

As a Houston native, Green grew up a big Rockets fan, and that made it more painful when they waived him March 8. But he is grateful now because that brought out the necessary drive in him.

"It was pretty embarrassing being cut from your hometown team," Green said. "I was a big thing when I got traded there. I was a hometown kid who grew up in the heart of Houston. I'm not saying I was a rock star in Houston, but a lot of people knew me because I was born and raised there and they know where I come from.

"It would have been hurtful to be cut from anywhere. But coming from your hometown team, the team you grew up playing for, when that happens to you, it's very hurtful."

Dallas gave Green a chance, signing him to a one-year deal worth $797,581. So far, he has been one of the few bright spots on a struggling team.

Green is averaging 8.5 points and 3.8 rebounds. His highlights include a season-high 17 points against the Lakers, and a 13-point, 12-rebound game against the Clippers.

"I remember when I used to take those last two minutes of a game for granted," Green said. "I wasn't maximizing my opportunities. In Boston, I wish I would've maximized the opportunities I got. That's what I am trying to do in Dallas."

The Celtics shouldn't be second-guessing themselves about Green since he helped them acquire Garnett, but Minnesota and Houston must be. Green was very green.

"One of the things we always said about Gerald is you'll never know if he can play until he grows up and matures as a person," said Celtics coach Doc Rivers. "And it looks like he's starting to do that."

And now that he's maturing and blossoming, Dallas (or his fifth NBA team) will reap the benefits.

"I've been cut from the league, and Boston kind of let me go," Green said. "Minnesota, they just didn't even play me. I was always in their doghouse and I felt I had no reason to be in their doghouse. The Rockets just got me and let me go like I was a piece of meat.

Forbes hopes this is a positive development

Murphy's Law has plagued former University of Massachusetts guard Gary Forbes in his young pro career, but he is hoping to find his way to the NBA through South Dakota.

The 2008 Atlantic 10 Player of the Year was not selected in the NBA draft. After he struggled offensively with the Washington Wizards' summer league team, no NBA team invited him to training camp. Next up was a trip to Italy, where he earned a starting position with Basket Napoli. But in September, just before the season was to start, Forbes was looking for a job again as financial problems forced the team to fold.

Back in the States, the NBA Development League's Sioux Falls Skyforce selected Forbes with the fourth overall pick in their draft. Forbes arrived in Sioux Falls Friday for training camp. By succeeding in the D-League, he hopes, he will be brought up by an NBA team.

"He's seen summer league play and a little bit of overseas, and obviously he was disappointed he didn't get picked," said Sioux Falls coach Nate Tibbetts. "Hopefully he comes ready to go. If he wants to get to the NBA, this is only going to help him.

"Of all the guys we've drafted, I've talked to him more than anyone. He really wants to get going.

"I just like the fact that he can do so many things. We watched him at the NBA predraft camp and he can score in a lot of ways. In the D-League, he will be successful scoring, but he also has to rebound and defend."

Foreign policy issue
Kevin Garnett and LeBron James were the top two vote-getters for last year's All-Star Game. This season, however, an unproven player from China is expected not only to cut into their vote total but also challenge them for a starting forward spot. The All-Star ballot was released last week and included New Jersey second-year forward Yi Jianlian. The 7-foot, 238-pounder was traded to the Nets in the offseason after struggling during his rookie season with Milwaukee. Yi has shown signs of being a future star, but he averaged just 10.5 points and 7.6 rebounds through his first eight games this season. Not All-Star numbers. But he will likely benefit from strong voting among the 1.3 billion basketball enthusiasts in China. If he is voted in as a starter, it could rekindle the debate over the fairness of the system. Back in 2003, Houston rookie Yao Ming was voted the Western Conference's starting center over Lakers star Shaquille O'Neal. By being teammates of Yao in Houston, Steve Francis and Tracy McGrady have benefited from the Chinese vote to gain All-Star starting positions.

Talent pool is a little shallow
You know it's a down year for international prospects when one of the top ones is actually American. One NBA executive said there are only four international players that are first-round prospects, one of which is Lottomatica point guard Brandon Jennings, an American who bypassed college to play overseas. The other three to keep an eye on are DKV Joventut point guard Ricky Rubio, Pamesa Valencia forward Victor Claver, and Buducnost forward Vladimir Dasic. The NBA executive, however, also noted that there are some talented international first-round prospects playing college ball in the United States: Connecticut junior center Hasheem Thabeet of Tanzania, and two Australians in Vanderbilt sophomore center A.J. Ogilvy and St. Mary's sophomore point guard Patrick Mills. Another NBA executive said the freshman crop is devoid of lottery prospects right now. The exec added that the 2008 All-America game, which features the top high school talent, was the weakest it had been in years. Even so, NBADraft.net has projected such freshmen as Ohio State center B.J. Mullens, Southern Cal guard DeMar DeRozan, and Wake Forest forward Al-Farouq Aminu as top-10 picks.

Free throws
New Nuggets guard Chauncey Billups, a Denver native, hopes that when his playing days are over he can join the franchise's front office. "I never thought about going into coaching," he said. "I want to be on the other side of it, kind of behind the scenes to try to put together a championship team. I think I can be good at that." . . . Ex-Celtic P.J. Brown, who is expected to stay retired, recently took his two young daughters to see Louisiana State's women's volleyball team play Florida in Baton Rouge. One draw was the opportunity to watch Doc Rivers's daughter, Callie, an outside hitter for the Gators, who was happily surprised by the family's attendance . . . Allen Iverson, on the Nuggets not advancing past the first round of the playoffs twice while he was with them: "I'm always going to be aware of it. If you ask me 10 years from now, I would say, 'Yeah, it was disappointing not getting there.' Will it hinder me at all or bother me day in and day out? It won't because I'm concentrating on what I need to do for the Detroit Pistons." . . . Former Celtics property Brandon Wallace was recently cut by his Turkish team, Mersin Buyuksehir Belediyesi . . . Remember ex-Central Connecticut star Keith Closs, who once played for the Clippers and can be seen getting beaten up in a YouTube video? The 7-2 center has resurfaced with NBADL Tulsa.

Jan. 10 All player contracts are guaranteed for the remainder of the season

Celtics-related multimedia from around the web.