Knicks' moves should help cause 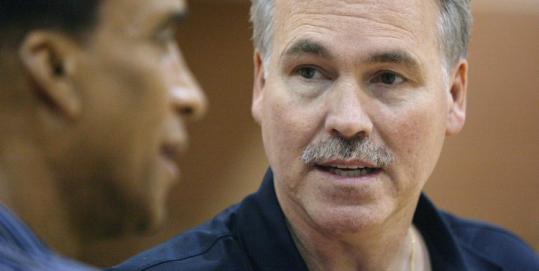 Film director Spike Lee was dressed in Knicks gear and rooting against the Celtics during the 2008 Finals in Los Angeles. You have to respect Lee's enthusiasm considering his beloved Knicks may be the laughingstocks of pro sports. They have been to the playoffs only once since 2002 and have often made more news in court than on the court at Madison Square Garden.

But now with a returned New Yorker (Donnie Walsh), a new coach (Mike D'Antoni), and a new forward (rookie Danilo Gallinari), Lee's Knicks have been able to "do the right thing" and give the storied franchise optimism again.

"This will be my third coach," said Knicks guard Nate Robinson. "It's another start, but hopefully it's going to be a good look and move for us if we keep playing as a team and get better. We're just trying to make the playoffs."

This past season, the Knicks missed the playoffs for the fourth straight year and had only 23 wins. Walsh became president of basketball operations in April and fired Thomas after the season, believing there would strong interest in the job elsewhere from quality candidates.

Walsh was right, and he hired D'Antoni to become the seventh Knicks coach since 2001. D'Antoni averaged 58 wins over his last four seasons in Phoenix with the most exciting up-tempo offense in the NBA, led by Steve Nash throwing alley-oops to Amare Stoudemire. While there is a talented guard (Jamal Crawford) and big man (David Lee) that will flourish in his offense, there is no Nash or Stoudemire with the Knicks.

"It will take some time," said D'Antoni, who is in Beijing as a USA Basketball assistant. "We want to get the most out of the players. We'll be up and down and we'll be exciting. But it will be tweaked.

"It won't be Steve Nash, it will be someone else. I'm looking forward to the challenge."

D'Antoni's challenge will be a roster that pales in comparison to those of Atlantic Division rivals such as the NBA champion Celtics and the improved Raptors (adding Jermaine O'Neal) and Sixers (adding Elton Brand). The Knicks' key returners include Crawford, Lee, slimmed-down swingman Quentin Richardson, hopefully slimmed-down big men Zach Randolph and Eddy Curry, and forward Jared Jeffries. Point guard Chris Duhon was New York's key offseason signee. Talented but troubled guard Stephon Marbury, however, has played his last day in a Knicks uniform, according to an NBA source.

But the future of the franchise is building around Gallinari, a rookie from Italy selected sixth overall in the June draft. The well-rounded 6-foot-10-inch, 210-pounder has superstar written all over him. He has the Broadway Joe looks and could end up being the 2009 Rookie of the Year. Yes, over Portland's Greg Oden, Chicago's Derrick Rose, Miami's Michael Beasley, and Memphis's O.J. Mayo.

"There is a lot of pressure," said Gallinari, 20. "But pressure is a part of our job. New York has got to win. We're doing all this changing. Me and all my teammates will try to do something better."

Asked about Gallinari, D'Antoni smiled and said, "He can play. He needs to get stronger, but he'll get stronger in two or three months."

Sorry, Spike, it's going to take much longer than two or three months to turn things around. But at least with Walsh, D'Antoni, and Gallinari, the pieces are in place to bring Knicks basketball back to respectability.

"It's going to be a tough job, but it's a great opportunity," Walsh said.

"New York is New York. It hasn't been good for a long time. But it will be great for the city and probably the league if they get back to where they were."

Through all the changes, key players still left include Michael Redd, Andrew Bogut and ex-Connecticut forward Charlie Villanueva. Redd admitted he is surprised to still be around.

"Out of everybody, I'm still here," said Redd, part of the US Olympic team in Beijing. "We have a whole new roster, a whole new group of guys. I was shocked that I remained.

"I thought with the rebuilding of the team and the changing of coaches and the organization moving in different ways, I thought I might be gone, too. Hey, I'm here."

When jokingly told that there was a lot of time before training camp to be dealt, Redd smiled and said, "You're right. You're right. You never know what happens, but at this point I'm still here."

"It's surprising," Redd said. "As we know, it's part of the NBA, trades happen. We're going to miss those guys. They were huge to our team last year. You got to move on."

Speak up
"It was something like supposed to be funny or something but never offensive in any way. I'm sorry if anybody thought or took it the wrong way and thought that it was offensive."
Spain's Pau Gasol, in defense of an ad showing him and teammates using their fingers to make their eyes look "Chinese."

The list
Top five best-selling NBA jerseys in China during the 2007-08 season:

The number
42
current and former NBA players on Olympic rosters.

Etc.
Welcome aboard: LeBron James finally got the veteran point guard he's been hoping to play with in Mo Williams via a trade with Milwaukee last week. James, in Beijing with Team USA, got word of the acquisition from Cleveland general manager Danny Ferry in a phone call from the United States. Williams averaged 17.2 points, 6.3 assists and 3.5 rebounds last season. "I'm happy," said James. He's a guy that can score, can run a team. And I'm looking for the opportunity to play alongside him."

Bye week: Mike Krzyzewski will not return to coach the US team after this three-year stint. As for USA Basketball senior managing director Jerry Colangelo, whom the organization can ill afford to lose, he says he will decide after the Olympics whether he'll return.

Pressing concern: Yao Ming almost reinjured his foot because of a media crunch. After the US hammered China, 101-70, a week ago, Yao was being interviewed behind a mixed zone barrier, primarily by Chinese media, when they got so excited that they began falling forward and came very close to pushing the barrier on his feet and falling on him. Yao backed up quickly, kept the barrier at bay with his hands, and motioned to them in a disgusted manner to move back before departing.

Want fries with that? Greek center Sofoklis Schortsanitis, whose draft rights are owned by the Clippers, is down to about 320 pounds after being up to about 400. "Baby Shaq" reportedly took a leave from playing for Olympiakos in January to go to a weight loss hospital in Switzerland. Legend has it that Schortsanitis once ate 100 McNuggets in one sitting.

Angolan audition: Keep an eye on Angolan guard Carlos Morais, whose 24-point performance (despite 10 turnovers) against the US could get him drafted by an NBA team next year. The 22-year-old plays professionally for Petro Atleticode Luandu.

Get back, JoJo: Celtics legend JoJo White went to Beijing for the Olympics and has blogged about everything from Team USA to Manny Ramírez on the National Retired Players Association's website (www.nbrpa.com).