Chad Finn
Maybe, judging by this photo of apparent chums Derek Jeter and Kevin Youkilis at Fenway last season, the Red Sox-Yankees rivalry isn't as heated as it used to be.

Oh, who are we kidding -- of course it is! Come Sunday night, when the teams open the 2010 season at Fenway Park, both teams -- or both fan bases, at least -- will want to start the others' season off on a losing note.

This season could shape up to be a particularly interesting chapter. The Yankees are the defending champs and have added reinforcements in Javier Vazquez and Curtis Granderson, while the Sox have made major improvements in pitching (John Lackey) and defense (Adrian Beltre, Mike Cameron).

We'd be foolish to judge which team is better before a pitch in the new season has even been delivered. But we'll gladly take a glance at the positional matchups, than leave it up to you to decide which team is superior at each spot on the field.

Oh, and as for what this photo really tells us . . . upon a second glance, could Jeter be defending himself against an accusation from Youkilis? Maybe that, say, his trademark jump-throw from the hole is all for show? Sox fans would like to believe so. Yeah, it's still a rivalry. 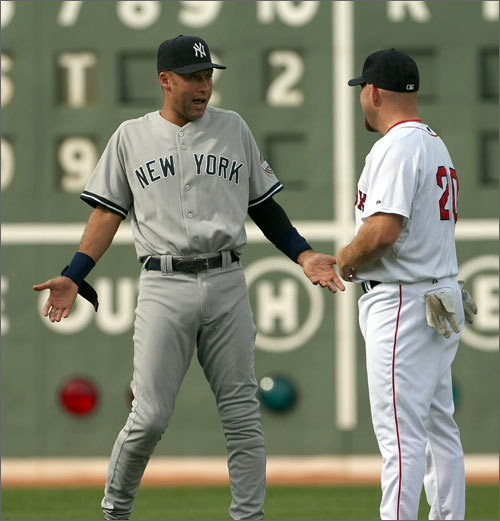