Well, it's all over. For today, at least. 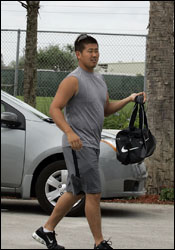 You already know the basics, but we're here to bring you all the details you wanted (or didn't want) to know.

Daisuke Matsuzaka entered the minor league complex here in Fort Myers (click here for photos), changed into his Red Sox duds, and has played catch with George Kottaras. As nearly 50 Japanese media members -- and about a dozen American ones -- chronicled the pitcher's every move, Matsuzaka remained almost completely aloof, not really ever acknowledging the presences of the throng with the TV and still cameras and pens and notepads. We're still not sure if he saw the Japanese flag planted not far from the turn-in, possibly by a fan. (A half dozen of them were seated near the flag as I left the complex.) He did, at the end, speak with the assembled Japanese media. Gordon Edes will be bringing you the translated comments shortly.

So, here it is, the step-by-step account of Matsuzaka's first appearance at spring training.

With the announcement coming that he would arrive at noon, Matsuzaka indicated he hasn't yet picked up on all the aspects of being in the big leagues, turning into the parking lot of the complex at exactly 12:01 p.m. to the snapping of camera shutters. After a lead vehicle, a gray Nissan, Matsuzaka pulled in, driving a black Cadillac Escalade, presumably the same one that whisked him away from the Tampa airport last night. And, yes, you read that right. Matsuzaka was driving, his escort sitting in the passenger seat.

As media relations folks here had lined up the media near the entrance to the complex, Matsuzaka walked by, clad in a gray sleeveless shirt and gray athletic shorts, black Nikes, sunglasses pushed up beyond his forehead, and a black bag thrown over his shoulder. Without a peep, he walked in. No member of the Japanese media asked so much as a question. Nothing shouted. Hardly the norm for the American media, for sure.

Matsuzaka soon had changed into a red team shirt, with Boston Red Sox written across the front, and had taken his walk from inside the clubhouse onto the field, accompanied by equipment and clubhouse manager Joe Cochran, assistant equipment manager Pookie Jackson, and new media relations employee (and translator) Sachiyo Sekiguchi. Kottaras trailed the group at a short distance.

By 12:35 p.m., the pitcher had reached the field, where he dropped his bag to the ground, and swung his arms over his head to get warmed up. Stretching followed, of course, and three minutes later he took a slow jog to the other end of the field with a ball in his hand. It was then that the single moment of curiosity came for Matsuzaka. Looking out over the swampy area out past the field -- the one rumored to hold alligators -- Matsuzaka stood and took it all in. Different? Welcome to spring training, Daisuke.

Long toss in the outfield followed the warmups, the ball easily sailing back and forth from Kottaras to Matsuzaka. He did, at times, have a little smile on his face, perhaps the only indication that he heard the thousands of shutter clicks accompanying every toss. And then, just as the pair was getting ready for the real workout, the media horde was escorted out of the complex. No more watching, as Matsuzaka's workouts before pitchers and catchers report had already been deemed off limits.

Yup, that was it. We get to hear more of his words (of the translated variety) at his upcoming press conference on Thursday at 5 p.m. So to hear more about his driving skills, or his thoughts on alligators, or even his temporary battery mate, you'll just have to wait. (At least until Gordo posts today's sentiments.)