Buchholz is a relieved pitcher

No timetable for his next start 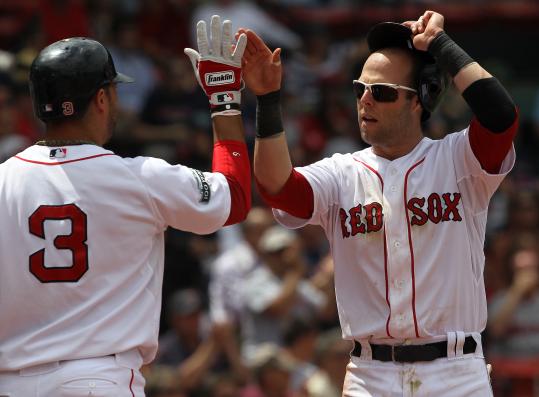 After a six-run first inning, Dustin Pedroia and the Sox had it made in the shade. (barry chin/globe staff)
By Michael Vega Globe Staff / June 28, 2012
Text size – +

Clay Buchholz, who was placed on the 15-day disabled list Sunday because of stomach illness, was in the Red Sox clubhouse, lounging on a couch watching the 1985 Chevy Chase movie “Fletch’’ with some teammates before Wednesday afternoon’s game against the Blue Jays.

“He looked so much better than I was led to believe,’’ said manager Bobby Valentine. “Hasn’t lost as much weight as I heard he had. He had good color. Eyes were bright.

“The difference is going to be getting him back in the saddle and, hopefully, the illness is behind us.’’

Buchholz was released late Tuesday night after spending five days at Massachusetts General Hospital, where he was diagnosed with esophagitis, an inflammatory condition that led to an erosion of his esophagus, and associated bleeding.

“It was real scary,’’ said Buchholz, who began having symptoms last Thursday when he  felt light-headed. “Whenever you got doctors telling you, ‘All right, come on over to my office and we’ll check you out,’ and you’re like, ‘I can’t get there, I can’t walk,’ it was pretty scary for about three days.

“They were trying to downplay it, but when you’re lying in an ICU, where I’m from, it usually means that stuff’s not going really well. Once I got out of there, the doctors were pretty up-front about it, saying it wasn’t really life-threatening at this point. They just had me in there to make sure that I wasn’t really losing any more blood.’’

Buchholz, who was visited Tuesday by Sox principal owner John Henry and team president Larry Lucchino, was fed intravenously for the first 72 hours of his hospital stay and received about 3-4 pints of blood.

“They were basically giving me medicine to coat my stomach and put it wherever the bleeding was coming from to stop the bleeding,’’ he said. “That’s when they started doing the tests. I really never cared to know what was going on, I just wanted to get out of there and that’s where I’m at now.’’

Asked if his physicians were able to pinpoint the cause of his gastrointestinal bleeding, Buchholz said, “No, I’m sure I’m going to have to go in and do some more tests when the guys go on the road. We might know a little bit more from that. But they still really hadn’t put a finger on what happened or what caused it and why it stopped bleeding or when it started, so, yeah, it would be news to me, too.’’

Buchholz declined to put any timetable on a return.

“Getting legs back under him is really important,’’ Valentine said. “It’s not a cliché, it’s figurative as well as literal.  He says it, but you really do have to have that foundation before you start propelling the ball forward.’’

After not eating for 72 hours of his hospital stay, Buchholz was thrilled to have lost only 3 pounds. And his appetite came back with a vengeance, as he wolfed down a hamburger and a pizza a visitor sneaked into his hospital room. “You don’t know how good food is until you’ve had to eat hospital food for a couple of days,’’ he said.

John Lackey, out for the season after undergoing Tommy John surgery last November, took a step in his recovery with some recent bullpen work.

Lackey had a light session Tuesday, and Valentine believes he is on schedule to throw before the end of the calendar year.

“He’s in the weight room. He’s working extremely hard, in his conditioning effort, in his rehabilitation effort,’’ Valentine said. “I think the projections of him pitching before the year is out, meaning the calendar year, I think he’s right on schedule.

“I don’t know about the season. But he’ll be pitching somewhere, I think, before the year is over.”

Lackey confirmed that he had already thrown three times off the mound, twice last week.

“It’s been like 20 pitches so far, like 80 percent effort kind of deal,’’ Lackey said. ‘’Long toss is the main thing for me right now, just trying to build my arm strength back up. I’ve got about two bullpens a week for about the next two months, so it’s a long process.

“My arm feels great so it’s definitely moving in the right direction. But it’s going to be a while before I get into a game, for sure.”

Darnell McDonald, who switched from center field to right in the sixth inning, submitted a web gem for the first out of the ninth when he made a leaping warning-track grab to rob pinch hitter Kelly Johnson of a home run. That atoned for an error he committed in the sixth when he booted a double to right by Jose Bautista, allowing the Toronto right fielder to go to third. ``That was the best part — the redemption,’’ McDonald said. “The Lord was looking out for me, because I really can’t jump that high.” . . . After David Ortiz went from first to third on Cody Ross’s double off The Wall in the two-run fourth, sliding hard into the bag, third base coach Jerry Royster appeared to take inventory of the big DH’s parts and pieces. “Actually not,’’ Royster said. “We’ve been having a few problems on the base paths from time to time, but he’s not. I was telling him what a great job he’s been doing at reading balls. Everybody can see how slim he is, but they don’t realize how good he’s actually run the bases. He’s one of our better base runners at this time. He’s maybe not the fastest, but he’s utilizing his speed maybe as good as anybody on the team.’’

Carl Crawford played in his second rehab game with the Gulf Coast League. Red Sox Wednesday, going 1 for 3 with a double, a fly out, and a strikeout in seven innings, playing left field . . . The Red Sox signed two more draft picks: University of Florida pitchers Brian Johnson and Austin Maddox. Johnson, a lefthanded junior, was selected in the first round (31st overall) while Maddox, a righthanded junior closer, was selected in the third round. The Sox have signed 21 of their picks, including their top 12 . . . Deven Marrero, Boston’s No. 1 overall selection out of Arizona State, hit his first homer as a professional Tuesday night, in his third game with Short A Lowell . . . Former Sox farmhand Oscar Tejeda, who had been designated for assignment Sunday to make room for Zach Stewart on the 40-man roster, was claimed by the Pirates and assigned to their Double A affiliate in Altoona, Pa.

Michael Vega can be reached at vega@globe.com