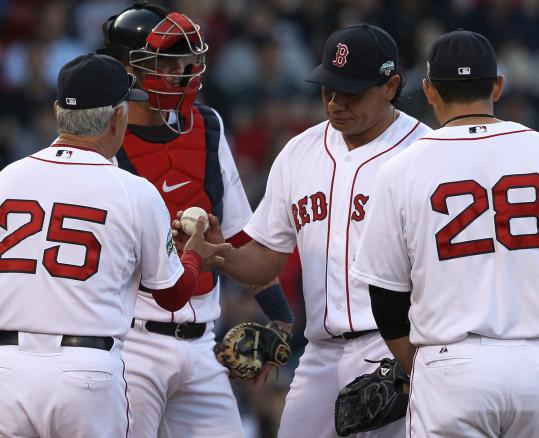 It was a day that, quite understandably, few involved want to talk about. Nearly two months have passed and the memory is still painful.

The Red Sox led the Yankees, 9-1, after six innings on April 21. Felix Doubront could have pitched another inning, perhaps. But what was the point? The bullpen could get the last nine outs.

Instead the Yankees scored 14 runs in two innings, hitting six relief pitchers so hard that owner John Henry called a meeting after the game to ask manager Bobby Valentine and general manager Ben Cherington what could be done.

“That was an ugly day,’’ said Matt Albers, who didn’t get an out during his time on the mound. “Nobody really knew what to say.’’

To that point in the season, Red Sox relievers had an 8.44 earned run average and opponents were hitting .319 against them. In 13 games, they had allowed 11 home runs. The Sox were 4-10 and the bullpen was directly responsible for four of the losses.

The painful recap is necessary to demonstrate just how far the bullpen has come since that dark day and the ones before it.

The 33-33 Red Sox start a nine-game homestand Tuesday night against Miami with their bullpen having become one of the strengths of the team. Over the last 53 games, Sox relievers have a 2.01 ERA and a 1.38 WHIP. Opponents are hitting .199 against them.

In what has been a tumultuous season for Valentine, his remaking of the bullpen on the run is a remarkable accomplishment.

The bullpen was in chaos when the season started. Closer Andrew Bailey had thumb surgery just as spring training ended and only now has started throwing off the mound.

Alfredo Aceves, the new closer, had worked as a starter all spring. So had Vicente Padilla, who agreed to pitch in relief rather than be released.

Valentine asked for patience. But the games had started and decisions had to be made about pitchers he was unfamiliar with.

“There was confusion only because the guys we had pitching at the end of the game weren’t doing that in spring training,’’ he said. “They weren’t given pitching in the bullpen in spring training. It takes time to build camaraderie. Everybody was trying to prove something to the other guy and jockeying for position.’’

Mark Melancon took the loss on Opening Day. Aceves blew a save in the third game. The Yankees game was “rock bottom’’ as Valentine said when it was over.

“Nobody really had a role,’’ Albers said. “From the second inning to the eighth inning you’re wondering who the call is going to be for. It’s good to know what part of the lineup you might be facing.

“We always tried to stay pretty even-keeled. It was one of those times when you do struggle you know there’s time to get it right. But it was hard going through it.’’

The Sox changed the mix, demoting Melancon, trading Bowden and dropping Thomas off the roster. Lefthanders Rich Hill and Andrew Miller came off the disabled list and pitched well.

Padilla, who wanted to start, proved uncannily adept at stranding runners. He has inherited 17 men on base in his 25 appearances as the primary setup man and one has scored.

Aceves, despite a 4.81 ERA, has converted 16 of 19 save chances. Scott Atchison, a spring training afterthought, is pitching like an All-Star, giving up five earned runs in 36 1/3 innings and striking out 29. Albers has a 1.52 ERA in his last 20 games.

“I didn’t throw in the towel. I didn’t say, ‘When are we going to make a trade.’ I liked what we had,’’ Valentine said. “A couple of the bad innings we had, we were an inning away from skating through that.’’

Catcher Jarrod Saltalamacchia said Padilla tied the bullpen together, bridging the gap between specialists and Aceves.

“He has been awesome,’’ Saltalamacchia said. “He knows what he can do and can’t do and he has no fear.’’

Many managers have one set of relievers for tight games and a few mop-up men to use when the score is lopsided. Valentine has given all his relievers opportunities in critical situations - with the caveat that they may need to pick up an inning or two when games are out of hand.

“That part is good. You don’t just come in to finish out a game,’’ Atchison said. “We’ve all had to get some important outs.’’

The Sox may have even uncovered an unexpected gem in former All-Star starter Mark Prior, who has struck out 19 in eight innings for Pawtucket after years of injury problems. He is “very close’’ to being ready for the majors according to Valentine.

“The bullpen has been great,’’ starter Jon Lester said. “It was a matter of time from the beginning of the season for those guys to get on a roll. When you have a bunch of new parts down there that don’t know what their roles are, it takes a while for guys to feel comfortable and obviously that was the case.’’

As the Red Sox struggle for consistency, the bullpen is one aspect of the game they can rely on.

“We’re proud of what we’re doing,’’ Miller said. “It’s not an easy job and maybe sometimes it’s underappreciated. But the guys on this team know what the bullpen guys have been able to do.’’