Hill avoids surgery, but will miss a few weeks 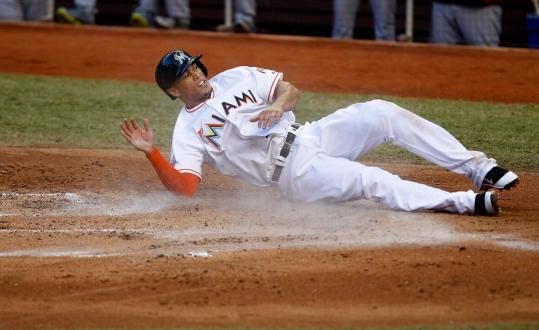 Mike Stanton did some dirty work for the Marlins in the first inning by sliding in safely with the team’s second run, scoring on a double and an error by Red Sox right fielder Adrian Gonzalez. (Sarah Glenn/Getty Images)
By Peter Abraham Globe Staff / June 12, 2012
Text size – +

MIAMI - Injured Red Sox reliever Rich Hill got some good news Monday. But that doesn’t mean he will be back on the roster any time soon.

Dr. James Andrews diagnosed Hill as having a strained flexor muscle near his left elbow, not any damage to the ulnar collateral ligament he had surgically reconstructed last June.

Hill pitched an inning Friday night against the Nationals and hit 94 miles per hour with his fastball. But he felt stiff afterward.

“The stiffness was not in the ligament, luckily,’’ manager Bobby Valentine said.

But Hill will need an extended stay on the disabled list before he can come back.

“He’ll have some time to rest that and get it back; I bet it’s more than a couple of weeks, I’m not sure,’’ Valentine said. “I bet it’s a month or more.’’

Hill had a 2.63 ERA and a 1.39 WHIP in 17 appearances. He has been with the Sox for parts of three seasons but appeared in only 32 games because of various injuries.

The loss of Hill leaves the Red Sox with two lefties in the bullpen, Andrew Miller and Franklin Morales. The luxury of a third lefthander allowed Valentine to use Morales in long relief stints with the idea of turning him into a spot starter.

That plan could be scaled back now.

“Trying to figure that one out,’’ Valentine said. “I explained a little plan to [Morales] and one of the things mentioned was that he is very durable and flexible. I want his mind to remain open.’’

Morales has pitched 7 1/3 scoreless innings in his last two outings.

Cody Ross was at Marlins Park early for batting practice and did some running in the outfield. He is hopeful of starting a minor league rehabilitation assignment as soon as Thursday. “I feel great. I’m doing everything without a problem,’’ said the outfielder, who has been out since May 19 with a fractured bone in his left foot. “Cody looked great,’’ Valentine said. “Thought he should just skip the rehab, he was swinging so good. But that’s not going to happen.’’ . . . Carl Crawford (left shoulder) also took batting practice on the field and threw from 40 feet. He will graduate to 75 feet Tuesday and go to Fort Myers Thursday to continue working out there. Crawford believes he is at least a week or two from getting in games. “I need to continue on the throwing program,’’ Crawford said. “I’m only throwing a short distance right now. Little by little, my elbow is getting there. I’m just doing what they tell me to do.’’ . . . Jacoby Ellsbury (right shoulder) is taking swings at balls flipped to him in the batting cage but has yet to take full batting practice. The center fielder suffered a partial dislocation on April 13. “We’re making progress,’’ Ellsbury said when asked when he thought he might be able to start hitting on the field. Two questions about how his shoulder felt drew the exact same response . . . Daniel Nava (left hand) was out of the lineup for a second straight day and is a day or two away from returning. He’s hitting .345 in June.

Aaron Cook threw two innings in extended spring training Saturday and on Wednesday will pitch for Lowell in a scrimmage. Cook started for the Sox May 5 and was spiked in his left knee covering the plate. He suffered a deep cut that required 12 stitches to close. “I can pitch normally and do everything with my legs,’’ Cook said. “I just need to get some innings in and get my arm back to what it was.’’ . . . Daniel Bard pitched an inning of relief for Pawtucket Monday night, allowing a run on a hit and a walk. He struck out two. The righthander was demoted last week to work on his control problems and pitched an inning as a starter on Friday. “He wants to get more of an adrenalin rush when he gets to the mound and he thought he’d get it back by pitching out of the bullpen,’’ Valentine said. The manager said that Bard pitching in relief was not indicative of the Red Sox returning him to the bullpen. “I don’t think that’s necessarily the case,’’ he said.

Valentine was critical of plate umpire Al Porter’s strike zone after Sunday’s 4-2 loss against the Nationals. He said he had not yet heard from Major League Baseball regarding a fine but expected to. “I probably will, right?’’ he said. “Isn’t that what happens? They fine you, they take your money and reprimand you, as though I did something wrong. It’s great. It’s a great system and I love it.’’

The Red Sox have Luis Tiant with them on the trip and he threw out the first pitch . . . Four Single A Salem players made the Carolina League All-Star team: shortstop Xander Bogaerts, righthander Mike Olmsted, first baseman Travis Shaw, and center fielder Jackie Bradley Jr. . . . The Red Sox have not announced any signings from the draft. But righthanders Mike Augliera (fifth round), Justin Haley (sixth round), and Kyle Kraus (seventh round) apparently have signed because they’re on the roster for Lowell. So are infielder Nate Minnich (eighth round), infielder Mike Miller (ninth round), catcher T.J. Watkins (10th round), and lefthander Dylan Chavez (14th round) . . . Former Red Sox outfielder Cliff Floyd (2002) is doing television work for the Marlins . . . The Marlins used their scoreboard to show Red Sox fans in the stands then switched to highlights of the Heat beating the Celtics Saturday. Perhaps they should have been grateful the Red Sox fans took seats that would have otherwise been empty. The Marlins are 10th in attendance in the 14-team National League despite having a new park.